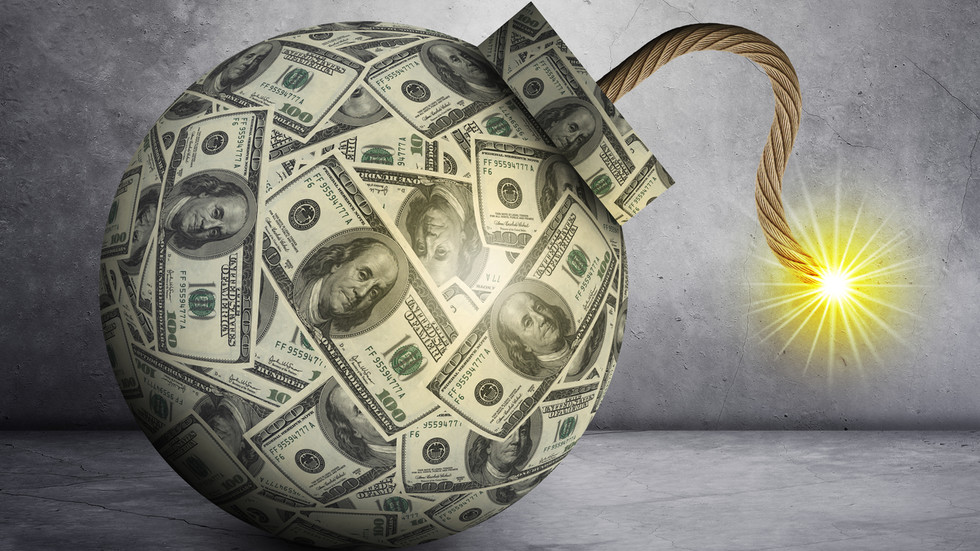 Endgame for America: Dollar literally a BOMB that could go off any day, warns Peter Schiff

The scale of money printing in the United States is unprecedented, says veteran stockbroker Peter Schiff. The deficits are “through the roof and the government is spending more money than ever before.”

Schiff, who is CEO of Euro Pacific Capital, told the MoneyShow that more than 60 cents out of every dollar the government is spending is being printed. So, the Federal Reserve is printing more money for the government to spend than the US government is collecting in taxes.

“The myth is that the US economy was strong before Covid. It wasn’t strong at all; it was the weakest it has ever been. It was the biggest bubble that has ever existed. That’s why the economy imploded so quickly as a result of Covid-19 lockdowns. The air started coming out in the fourth quarter of 2018… And the dollar is being wiped out.”

Schiff points out that “everything that the US government did in the aftermath of the 2008 financial crisis was a mistake.” All of its monetary policy was wrong, all of its fiscal policy was wrong. “As a consequence, we never actually recovered from the crisis, which was caused by the Fed and the government. We simply made all the problems that caused that crisis worse.”

America is about to experience inflation on an unprecedented scale, he says. The cost of living is going to skyrocket and it’s going to happen very quickly. “It’s going to hit people like a ton of bricks. And they are not going to see this coming.”

He explains that will be a sovereign debt crisis, which means US Treasuries are going to go bad, as well as all debts denominated in US dollars.

The dollar “is going to fall through the floor and inflation is going to ravish the United States,” Schiff predicts, adding: “What’s about to happen is that the world is going to go off the dollar standard and go back to the gold standard. That is where we are headed.”

The current system doesn’t work, you can’t back your currency with an unbacked currency, he says. “The entire American economy is built on the foundation of the dollar being the world’s reserve currency. That is the secret source that makes this economy work. Once the dollar is just another currency, then it’s all over, it’s the end of the game for America.”

According to the economist, “The dollar could collapse any day, it is like literally a bomb. The key is to get money out of US dollars because it’s the dollar that is going to be collapsing.”

He says it’s reasonable to buy gold to ease the financial pain because “Gold and silver stocks are a bargain.”