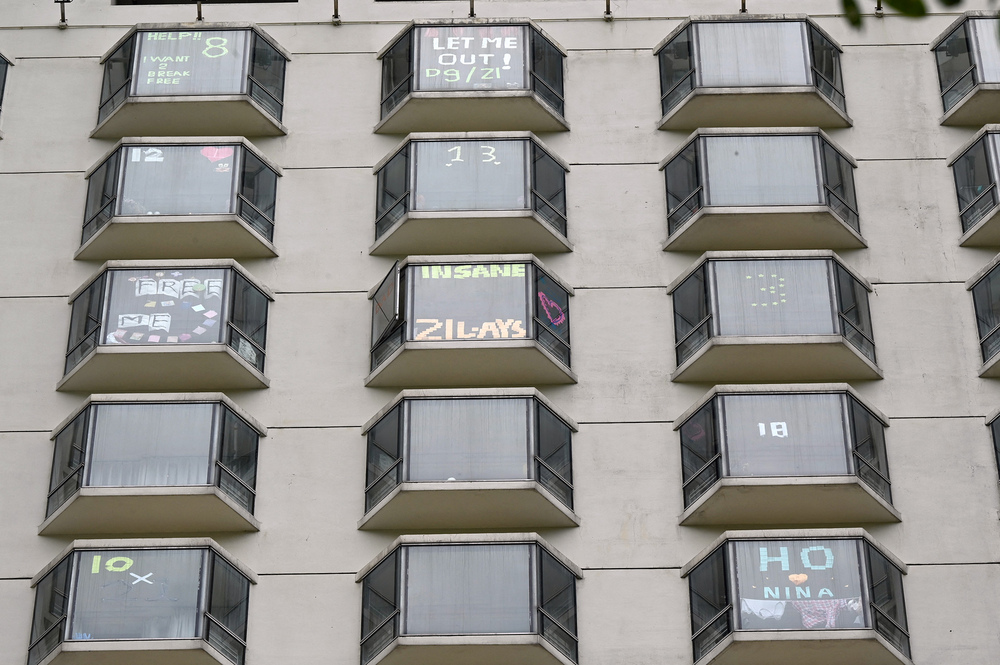 End of quarantine beginning of crisis for Hong Kong hotels

Hong Kong’s former quarantine hotels are awash with empty rooms, after the city axed its dreaded mandatory isolation rule for arrivals but kept other virus curbs likely to repel inbound tourists.
The Ovolo group’s Southside and Central properties had just four bookings left on Monday after logging some 1,500 quarantine cancellations over the weekend, said Mael Vastine, director of operations in Hong Kong. “Business has been impacted and it will take some time to recover,” he added, noting that neither hotel had taken a new reservation in recent days.

The Landmark Mandarin Oriental’s manager, Christoph Schauer, said the “vast majority” of its guests canceled after Chief Executive John Lee announced Friday that international arrivals would no longer need to spend three days isolating in a hotel. Some 26,200 rooms across the city had been reserved for quarantine before the move.

The upscale property had expected to receive one month’s notice before the program ended, Schauer added. Instead, it got three days, finding out at the same time as the public that quarantine was finishing Monday. “We had our plan ready. We just had to compress it,” Schauer added, saying he understood the government’s need for urgency.

Hong Kong’s abrupt elimination of the hotel quarantine program that has weighed on the city’s economy blindsided the 60-plus hotels that had relied on it for bookings for nearly two years. This month, hotels had been invited to express interest in participating in the program’s next three-month cycle from November.

Under the new so-called 0+3 program, arrivals are still subject to three days of self-monitoring and testing, during which they must submit to PCR tests and are barred from bars, restaurants and many public spaces, putting an imminent influx of foreign guests out of reach.

“We will just be barely surviving,” Winnie Chan, association manager at the Federation of Hong Kong Hotel Owners, said of the new rules. “We hope the government can further relax to 0+0 as soon as possible.”

Perry Yiu, a lawmaker for the tourism sector, called on the government to better support hotels until tourists returned, saying such properties had been “at the forefront of Hong Kong’s anti-epidemic effort.” “The government should provide some support for them during this period of pain,” he added.

The government said in an emailed statement that for a 30-day termination period former quarantine hotels could claim a subsidy based on their cheapest room cost, occupancy rate and property size, provided at least half their rooms were empty. That would allow a hotel with 100 rooms operating at 10 percent occupancy to claim at most HK$24,000 (US$3,060) a day.

Hong Kong’s elimination of hotel quarantine came as Japan and Taiwan both announced plans to abolish Covid border curbs to attract tourists. Other parts of Asia such as Thailand and Singapore are already open and living with the virus, making them a more attractive destination than Hong Kong, which also still has an outdoor mask mandate.

“People won’t come if there’s other choices -- if you can go to Japan or Southeast Asia,” said Eric Gnock Fah, co-founder of travel booking service Klook, in an interview on Bloomberg TV Monday.

Instead, the city is facing a surge in outbound travel. That could negatively impact hotels previously capitalizing on the staycation market, as residents no longer subject to return quarantine take their spending power abroad. Trip.com’s Hong Kong website saw a nearly 400 percent increase in outbound flight orders over the weekend compared with Sept. 17-18.

“Many people may prefer traveling overseas to staying in Hong Kong for vacation,” said Chan, of the hotel owners’ association.

While inbound flights to Hong Kong also saw a 155 percent spike from the previous weekend, the numbers represented a fraction of pre-pandemic arrivals. The city welcomed 124,000 visitors in the seven months to July -- compared with 40 million in the same period of 2019, according to the Hong Kong Tourism Board.

The Ovolo’s Vastine called on the government to remove the final curbs on arrivals as soon as possible to help hotels drive up occupancy rates. “The best help the government could give the hotel industry is to move toward getting rid of all the restrictions,” he added.

Vastine said Ovolo hotels had seen demand dip by 60 percent since quarantine was reduced from seven to three days in August. That was a significant change from the program’s more lucrative period when quarantine stays were as long as 21 days.

Hotels for nearly two years dictated high rates as limited supply made it hard for travelers to secure the bookings needed to reenter the city. Over the summer, properties in the quarantine program charged on average 25 percent more compared to a year ago for equivalent rooms as demand surged, according to an analysis by Bloomberg.

Vastine said participating in the program had been costly, as properties needed to buy personal protective equipment for staff and perform deep cleans that took a heavy toll on rooms, to comply with Health Department rules.

Anita Chan, senior vice president of global marketing at Dorsett Hospitality International, said lifting quarantine was a “vital step toward a full end of restrictions.” The group planned to use the next three months to refurbish rooms to prepare for the “full reopening of Hong Kong.”

In the meantime, the brand’s three Silka Hotels would launch packages catering to domestic helpers, whose employers might not want them to undertake the three-day self-monitoring period at home. Such workers must legally live with their employers.

The Mandarin’s Schauer echoed that optimism, saying that despite the short-term challenges, the hotel staff’s overall reaction to the scrapping of quarantine was one of “relief.”

“We opened our lobby doors Monday afternoon and welcomed our first guests,” he added. “It was great to see colleagues in front of the house without the full PPE and gloves and goggles.”

To attract new guests, the hotel is planning a marketing campaign to appeal to overseas tourists, emphasizing its amenities and the outdoor activities available in Hong Kong during the surveillance period.

“It’s a bit early to say who we expect to return to Hong Kong,” Schauer said. “We do get quite a number of inquiries for stays from corporate and leisure guests. We all remain very optimistic and excited to welcome them back.”
#Covid
Add Comment