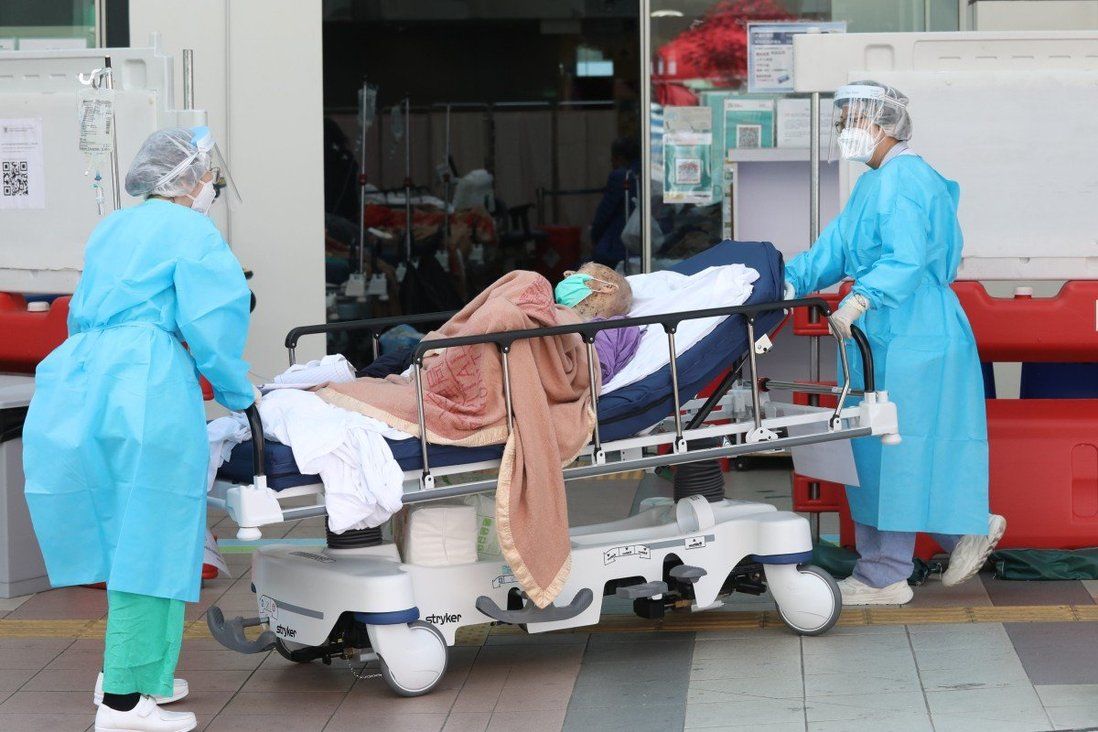 NGO-run hotline records sharp increase in Covid-related distress calls from 54 in January to 2,020 inquiries in first two weeks of this month.

The number of coronavirus-related calls to a popular emergency hotline for elderly Hongkongers has multiplied about 37 times since January, with a patient rights advocate having warned of a rise in “sudden deaths” during the city’s fifth wave.

According to the association, the hotline received 54 Covid-related distress calls in January and 2,020 inquiries involving ambulance services in the first two weeks of this month.

Apart from the 2,020 calls, 1,141 users have told the NGO they had tested positive for the coronavirus. The group also received 45 calls asking for help with testing, and 211 about booking spots at designated clinics.

Meanwhile, calls about other pandemic-related measures surged from 1,336 in January to 2,439 in early March, with most asking about inoculation centre locations, vaccine pass details or mandatory testing orders.

General inquiries also reached a daily average of 2,138 for this month so far.

The association said the figures underlined the challenges faced by many elderly residents, especially those who live at home alone. Many found it difficult to call for ambulance services, while others needed help taking rapid antigen tests.

Elderly residents have continued to be extremely vulnerable to coronavirus during the fifth wave, with some seniors dying at home before they could reach the hospital.

On Tuesday, the Hospital Authority reported 284 coronavirus-related daily deaths, while the Centre for Health Protection said that a 57-year-old man with no history of chronic illnesses died after collapsing at his home in Kwai Chung.

Local media reported 11 similar cases between March 5 and 14, with 10 people testing positive but dying at home, while another was found to have contracted Covid-19 after dying in hospital.

Tim Pang Hung-cheong, a patient rights campaigner at the Society for Community Organisation (SoCO), said the incident highlighted that some coronavirus-related deaths may have resulted from an inability to access adequate care at overcrowded public hospitals.

“Many elderly residents might have stayed away from hospitals as the facilities were overwhelmed until their conditions deteriorated rapidly,” Pang said. “These sudden deaths showed the government needs to do more to help those elderly residents living by themselves.”

He urged the government to prioritise elderly patients who lived alone for admission to hospital, while calling for officials to proactively admit seniors if they tested positive.

With many of SoCO’s community centres having closed during the fifth wave, the group has organised weekly calls to check up on seniors living alone, as well as delivering supplies to any elderly residents who have tested positive.

The NGO has also partnered with clinics to arrange private vaccination sessions, with SoCO community organiser Ivan Lin Wai-kiu saying seniors found the service preferable to public clinics, which they often felt were too crowded and dangerous.

But the community organiser said the group was too overstretched to handle the current volume of supply deliveries and calls.

“We have received thousands of pleas for help across the organisation, logistics are tight,” he said, adding staff were also facing a “learning curve” about how best to help.

Lin called for authorities to step up their hotline services and improve their existing online help channels to better handle the number of inquiries from seniors.

He added that the government should set up more personal and offline channels for elderly residents who did not know how to operate online platforms.

“Digitally disadvantaged elderly don’t have smartphones or know how to use the internet, they rely on in-person services at community centres, which is a bottleneck in service provision,” Lin said, calling it a “long-term problem” that had pre-existed the pandemic.