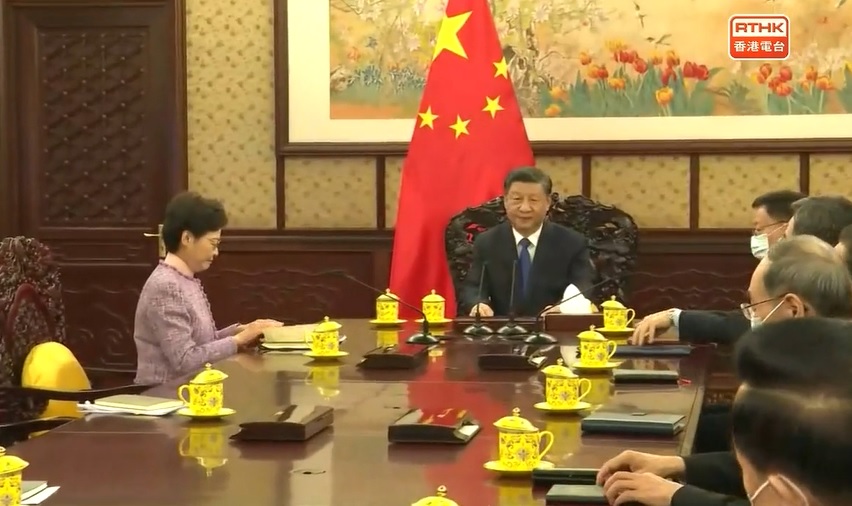 Elections show Hongkongers are in charge of city

President Xi Jinping told Chief Executive Carrie Lam Cheng Yuet-ngor that the success in recent elections shows Hongkongers are in charge of the city.
In a face-to-face duty visit today, the first in two years, Xi met Lam on Yingtai Island of Zhongnanhai, when he said Lam has led the administration to restore order from unrest, contained Covid-19 outbreaks, and revived the economy, adding the central government "fully recognized" the efforts made by the SAR government.

He also referred to the implementation of the National Security Law in Hong Kong, when he said the SAR government has moved things back on track, defended the authority and dignity of rule-of-law, driven the SAR into blending with the nation's development and deepened cooperation with the mainland.

He praised Lam for following the National People's Congress's decision in making "systemic improvements" to the SAR's electoral system.

"It was a realization of Hongkongers running the place and them executing their democratic rights. The principle of ‘patriots ruling Hong Kong' was implemented. A political setting allowing fair participation from all classes and sectors of the society was established."

Xi said this year is the centennial of the Chinese Communist Party, and when the historic Resolution of the Central Committee of the Communist Party of China on the Major Achievements and Historical Experience of the Party over the Past Century was revealed last month, one country, two systems was included as part of the key content.

He said the 24 years after Hong Kong's handover have proven 'one country, two systems' to be beneficial to safeguarding the fundamental interests of the country, Hong Kong, and Hongkongers.

In a pink dress and a purple tweed jacket, Lam thanked Xi for acknowledging her efforts and those of the administration.

She said she was delighted to visit Beijing in person to thank Xi for his care of Hong Kong and trust in her as the city's leader.
#COVID-19  #Covid
Add Comment