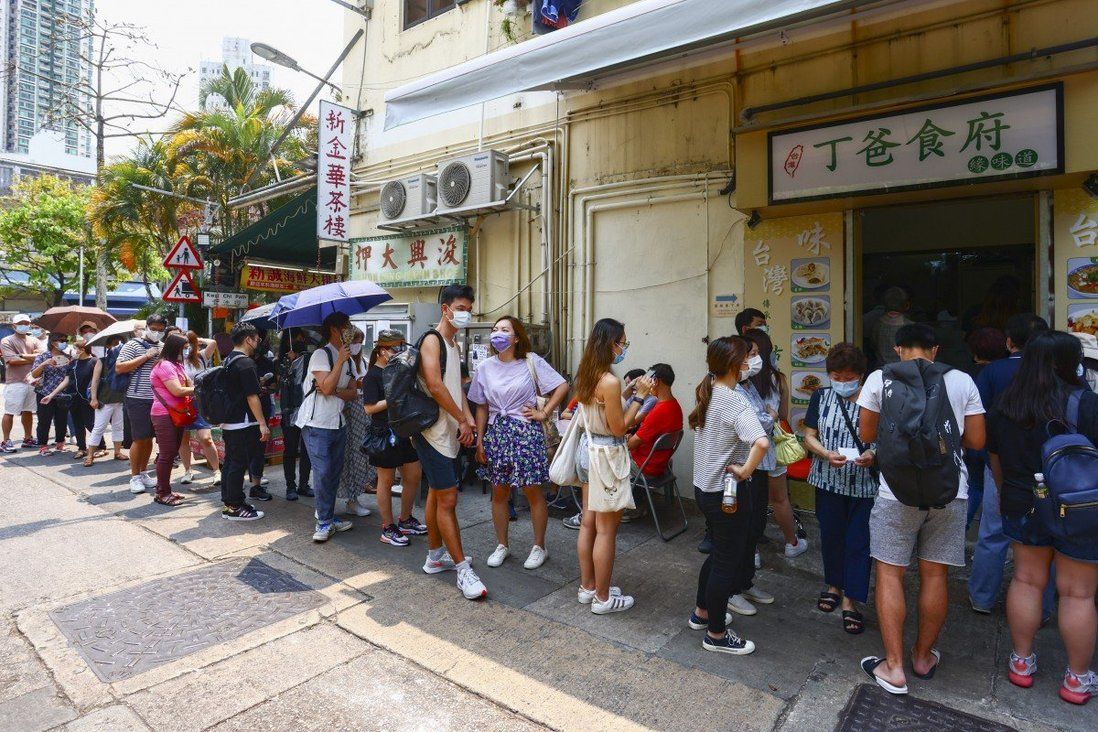 Hotel occupancy hits 90 per cent as lack of travel sees residents opt for staycations, while city’s theme parks and restaurants all report surge over five-day holiday.

Hotels, restaurants and theme parks in Hong Kong recorded a sharp rebound in business during the five-day Easter break, while the catering sector sought to improve its fortunes further by motivating staff to be vaccinated against Covid-19.

Hotels offering staycations with swimming pools, restaurants and child facilities, were about 90 per cent full during the long weekend, which ended on Tuesday, compared with about 40 to 50 per cent occupancy on normal days, according to industry sources.

Restaurants generated HK$320 million (US$41 million) in daily revenue, or 90 per cent of pre-pandemic levels, they said.

The high level of occupancy marked the hotels’ best performance since the national day holiday in October last year, or before the outbreak of the Covid-19 fourth wave, on the back of the city’s near-lockdown, tourism lawmaker Yiu Si-wing said on Tuesday.

“Staying at hotels with staycation features, such as outdoor pools, different dining options and entertainment for children costs less than HK$1,000 per room/night for four- or five-star ones, which is only one-third or even half the price in normal times,” he said. “Hong Kong hotels will have to rely on staycation deals for local customers, a situation which will prevail for at least the next three months.” 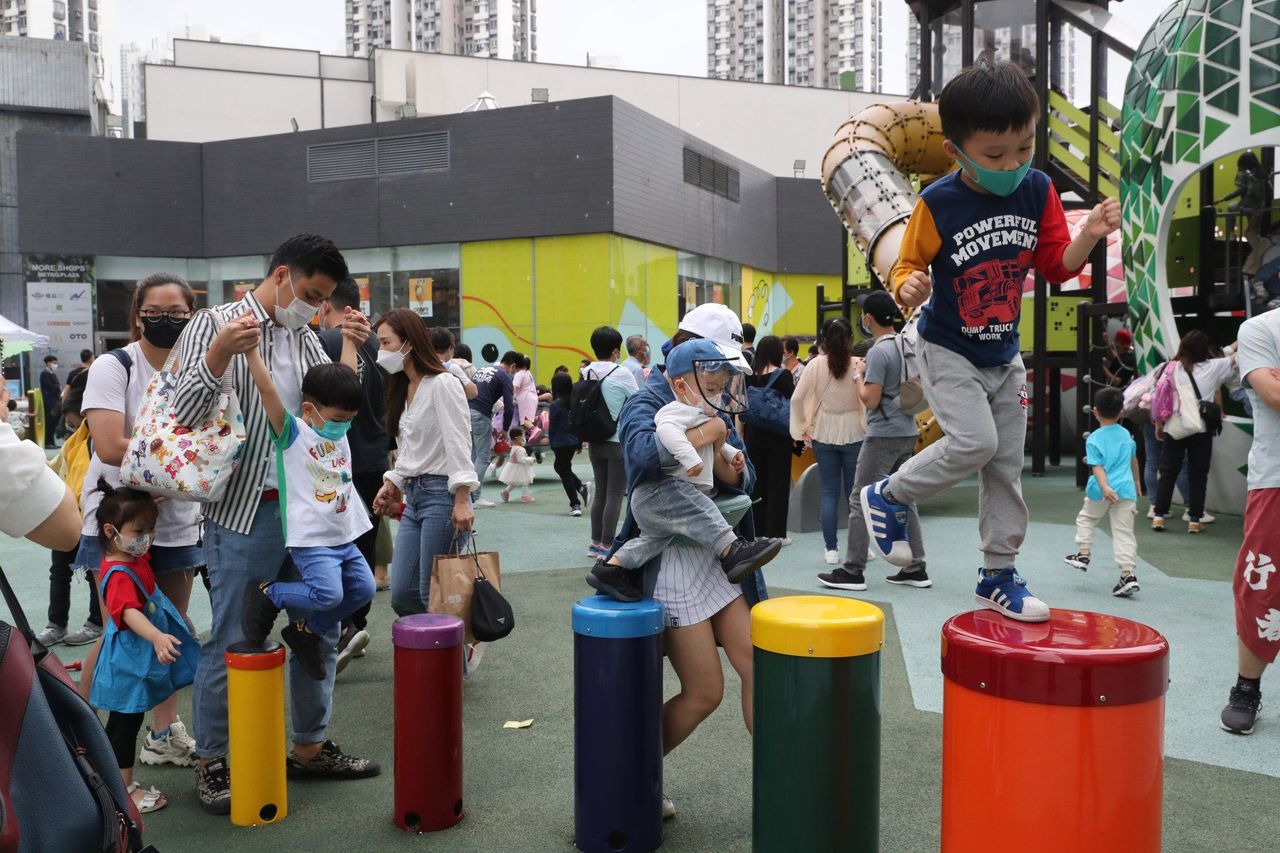 Children play at Fun Park at Metroplaza in Kwai Fong over the Easter holiday.

The two theme parks – Hong Kong Disneyland resort on Lantau Island and Ocean Park in the Southern district – also did well and were packed with visitors over Easter. Disneyland was so busy that it extended operating hours to 8.30pm and will not have any walk-in customers on Wednesday because all bookings have been snapped up.

Social-distancing rules in the city was eased last Thursday, with restrictions on church gatherings relaxed, while public pools and beaches were reopened, and more visitors were allowed at theme parks.

One of Hong Kong’s largest hotels, the 1,608-room Nina Hotel Tsuen Wan West, recorded an occupancy rate of 95 per cent between April 1 and 6. Guests were largely families who spent one night there, general manager Winnie Woo told the Post. About one-third of the rooms were already occupied by guests staying long term.

“Our large swimming pool has just reopened, and as our rooms and suites are relatively large in size and with various bedding options up to double-double beds that can accommodate a family of four in a room, family staycations have increased compared with normal weekends,” she said.

As people could not travel overseas, guests tended to spend two days and one night with the hotel, having full-board dining services and joining some workshops such as coffee art sessions, she added.

Simon Wong Ka-wo, president of the Hong Kong Federation of Restaurants and Related Trades, said the catering sector had been doing robust business during the Easter break - up to 90 per cent of pre-Covid-19 sales.

“The business of the catering industry has rebounded a lot,” he said. “On average, restaurants’ daily takings reached HK$320 million during this five-day holiday, compared with daily revenue of HK$350 million before Covid-19 hit Hong Kong.

“In the past, about 500,000 to 600,00 Hongkongers left the city during the Easter break. But this year they are forced to stay in Hong Kong so many of them have eaten out with their family and friends to celebrate Easter.”

As to whether the government was going to further relax social-distancing measures for restaurants, which at present can only operate at 50 per cent capacity with a maximum of four people per table, Wong said as far as he knew the government was waiting another week before deciding if the situation allowed for a further easing of the rules. 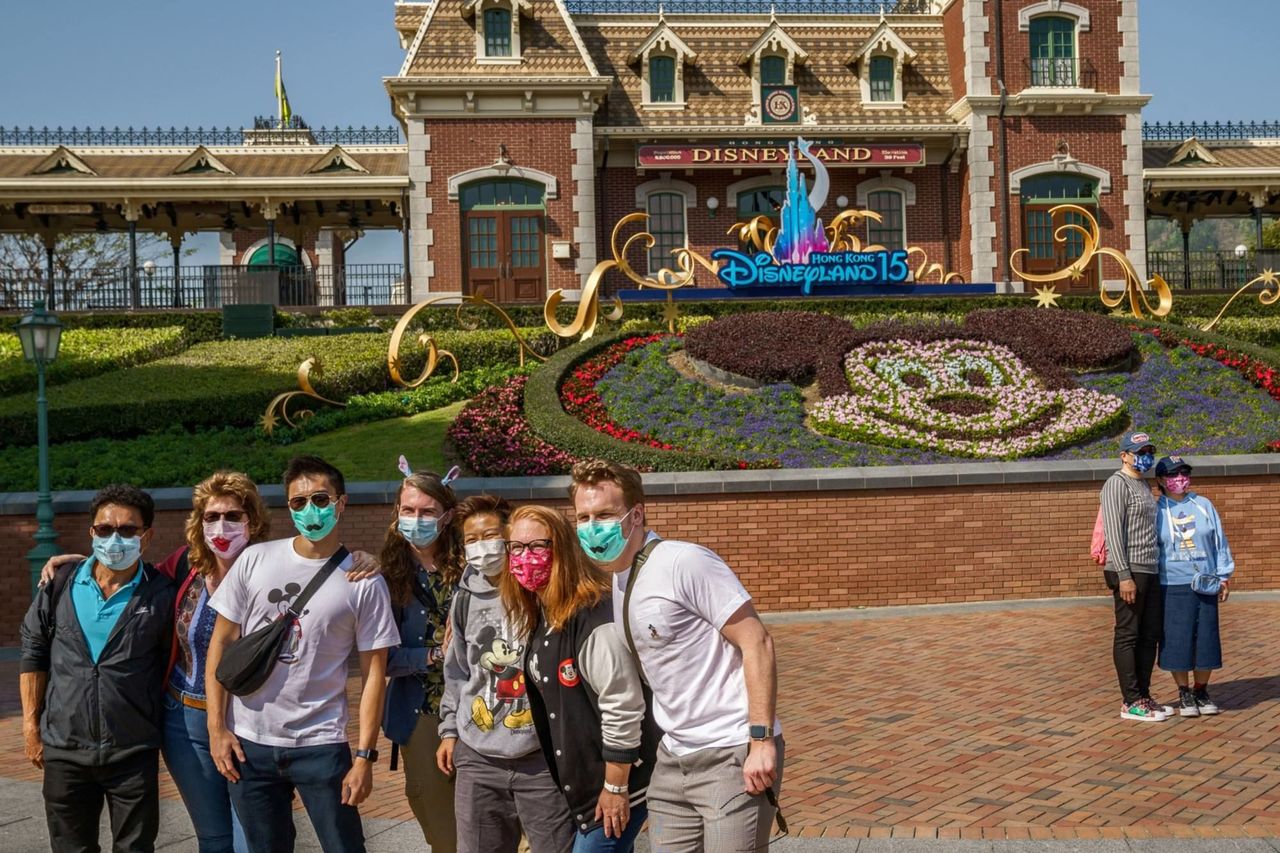 Visitors pose for photographs at the Disneyland Resort.

David Leung Chi-wai, chairman of Seafood Delight Group, which operates 12 Chinese restaurants with about 400 employees, said his group’s business had gone up by about 50 per cent during the Easter break compared with weekdays.

“The rebound in business is expected as this is a five-day holiday where people can’t go anywhere but stay in Hong Kong,” he said. “There have been long queues too during daytime, a scene we haven’t seen for a long time.”

Leung revealed that the catering industry had been mulling incentives to attract employees to get vaccinated, such as a reward of paid holidays, saying so far only a quarter of his staff had taken the jabs.

“The industry has been in discussions with stakeholders about giving rewards to employees who received the shots,” he said. “They are thinking of offering one holiday for each injection taken. If the employees take a total of two shots, it means they can have two holidays each.”

Ray Chui Man-wai, chairman of Kam Kee Holdings, which owns about 36 restaurants and employs more than 800 staff, said his group’s business had rebounded by up to 30 per cent.

He said to encourage staff to take the jabs, the group had already offered them one holiday per shot as a reward since April 1. “My staff feel excited about this offer. They all view it as a positive thing,” he said.

Despite the boost in business during Easter, both Leung and Chui said their business could only survive for a maximum of two to three months if the government did not further relax the Covid-19 containment measures.

“The government should at least enable us to run at about 80 per cent capacity. Then we can see a glimpse of hope for survival,” Chui said.