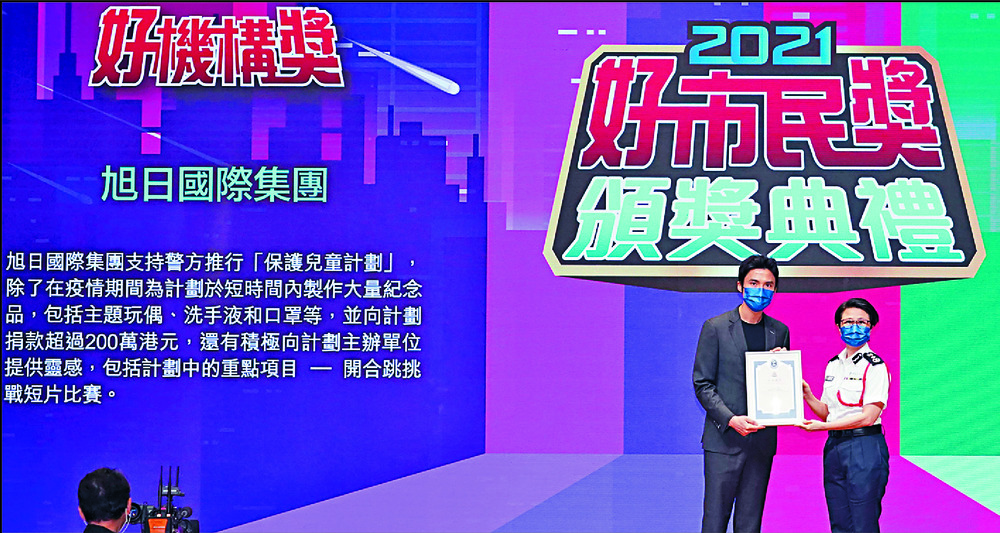 Early Light lives up to name in child protection

That came as part of the second phase of the force's good citizen awards presentation ceremony 2021 at the Convention and Exhibition Centre on Sunday, in which 40 individuals were also honored.

The six organizations were honored for their support of the police's "Let's TALK" child protection campaign from October 10 to November 27, which saw activities to foster parent-child ties and relieve parental stress in child raising.

Acting police commissioner Edwina Lau Chi-wai said in her welcoming speech that the awards had been a great success since its establishment in 1973.

"The scheme had moved with the times and introduced the 'good organization award' last year, so as to extend the synergy effect in promoting crime prevention at both individual and organizational levels," she said.

Early Light has supported the efforts by providing a large number of souvenirs, including themed toys, hand sanitizers and masks during Covid outbreaks, as well as offering inspiration for the campaign, including its key event - Jumping Jacks Challenge Video Clip Contest.

Sino Group played promotional clips for the campaign for free on screens in malls such as Tuen Mun Town Plaza, Olympian City and Citywalk.

It also sponsored the design of the four mascot characters, whose initials make up the key word in the campaign and which were animated to introduce different ways to handle child abuse.

The kuk encouraged students to join the two competitions, and submitted over 4,600 coloring pieces and 200 videos.

Tung Wah Group of Hospitals encouraged students in its schools to join the competitions, contributing over 1,150 coloring pieces and 170 videos.