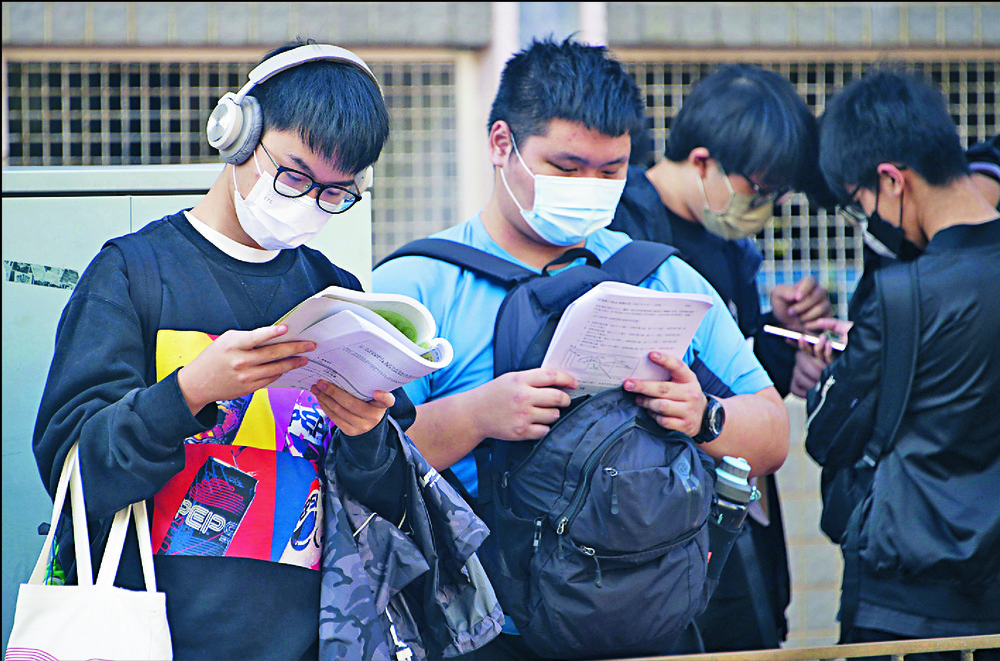 More than 70 percent of Hong Kong Diploma of Secondary Education examination takers feel their secondary school life has been incomplete amid the Covid pandemic over the past 21/2 years, which has mostly overlapped with their three senior years, a survey finds.
Ahead of the release of DSE results next Wednesday, the Hongkong Federation of Youth Groups yesterday announced survey results involving 581 secondary six students who took the exams this year.

Over 60 percent of respondents said the suspension of in-person classes during the ongoing fifth wave since December has affected their preparations for the exams.

Asked about their future path if they are not admitted to Joint University Programmes Admissions System programs of their choice, 31 percent said they will study overseas, up from 26 percent in last year's survey.

Over half said they would opt for self-financed associate degree programs. Some 45.8 percent rated their stress levels between seven and 10 on a 1-10 scale, slightly lower than 49.7 percent last year.

Having spent most of their high-school lives in Covid times, 73 percent felt their campus life was incomplete as many activities had been canceled, such as graduation dinners and sports galas.

One of those sitting for the DSE exams, Ong, said relationships between classmates were not as close as pre-pandemic times.

Another, Ng, said she did not enjoy much school life over the past three years and could not even recall if she ever had lunch with classmates on campus.

She said the learning atmosphere at home was not disciplined as students were less willing to turn on cameras and ask teachers questions during online classes.

Ong said lesson time was sometimes wasted or went past allotted times as his teachers were not familiar with the new setting, affecting his study plans. He would then message teachers after class and videoconference classmates so they could revise together.

Those findings came as a poll conducted by Gratia Christian College and Junior Chamber International Apex showed that among 1,501 primary three to secondary six students, 19.7 percent had higher stress levels than normal and 13.4 percent felt anxious - higher than the 4.4 percent and 9.4 percent levels in western countries.

Among those who felt stressed, 22 percent said the stress "can be triggered easily," while some 24 percent said it was "hard to start studying or working on their own." Some 35 percent said they worry about panicking or making a fool of themselves.
#Covid
Add Comment