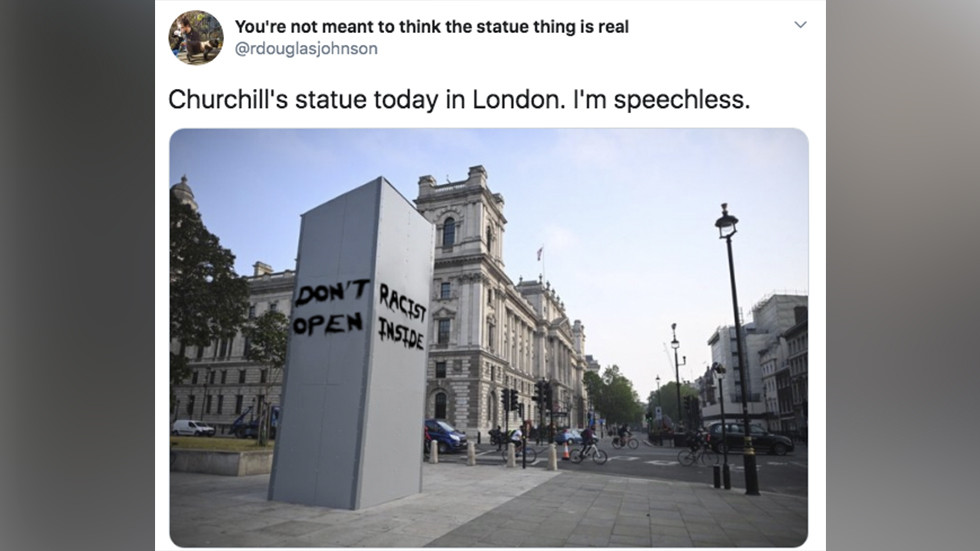 People were left “speechless” after a photoshopped image of a statue of British wartime leader Winston Churchill emerged online. The monument was vandalized during protests against racism and police brutality last week.

The statue outside the British Parliament building was boarded up for protection against vandalism. Now an image has been circulating on social media showing the words “Don’t open, racist inside” written on the boards covering the monument.

While commenters online were quick to point out that the phrase was digitally added to the original photo, there has been growing outrage over the treatment of the statue by protesters. While some view Churchill as a symbol of colonialism, many regard him as one of the greatest British statesmen, who led the nation to victory in WWII.

“I’m speechless,” one Twitter user said, commenting on the photoshopped image. “This man is one of the reasons Britain and most of Europe didn’t end up under Nazi control, and this is how y’all thank him,” another wrote.

Some argued that complex historical figures require an honest judgment. “History is grey and while we should be thankful for Churchill’s leadership during WW2 – he was far from perfect, and to many downright awful,” a person wrote online.

Officials also defended the statue. Prime Minister Boris Johnson said that boarding it up was “absurd and shameful,” while Home Secretary Priti Patel called for the coverings to be removed. “We should free Churchill, a hero of our nation, who fought against fascism and racism in this country and Europe,” she said.

The statue was vandalized last week during the protests sparked by the death of George Floyd, an unarmed black man who died in the hands of a white police officer in the US.