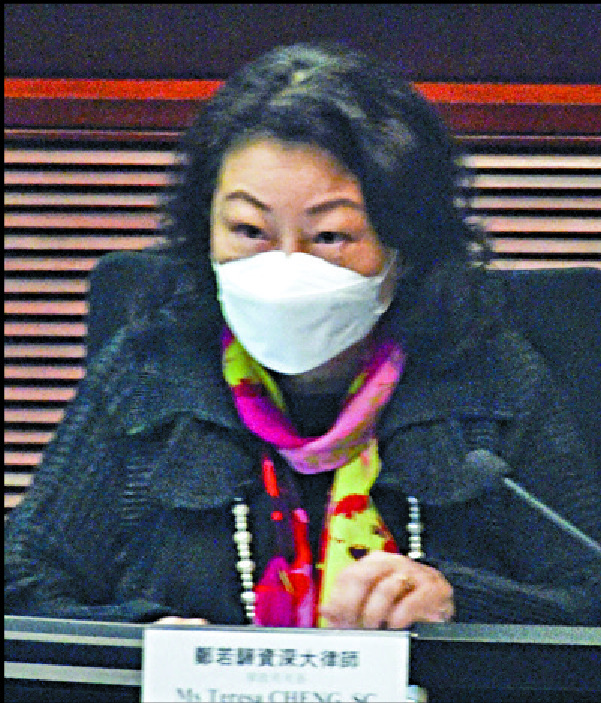 Secretary for Justice Teresa Cheng Yeuk-wah has dismissed criticisms that the Department of Justice handles protest-related trials too slowly, saying the DoJ has always handled prosecution fairly based on evidence and the law.
In the Legco's Panel on Administration of Justice and Legal Services meeting yesterday, lawmakers criticized sluggish handling of trials involving protester defendants.

"One of the biggest barriers and bottlenecks lies at the DoJ," he said. Ho also voiced discontent over judges often granting permission to hearing adjournments.

Elizabeth Quat Pui-fan of the Democratic Alliance for the Betterment and Progress of Hong Kong said among the over 10,000 people arrested for the anti-fugitive bill movement, only some 2,600 have been prosecuted so far.

Cheng assured lawmakers that the prosecution division will not delay cases indefinitely.

"But at the court, the defendants would sometimes [propose] reasons and demands for an extension of time," she said.

"I certainly do not agree that the bottleneck for handling these cases was at the DoJ."

She also said prosecutions depend on evidence and law.

Factors including the investigation progress, amount of evidence and the complexity of cases will affect the time needed for prosecutions.

Cheng said that in the sample of trials involving some 200 arrestees over the Polytechnic University protests, the earliest cases are scheduled to begin trial from March next year to October 2023.

As for the 99 people arrested for the riot at the central government offices on September 29, 2019, Cheng said their trials are scheduled to be held from September 2023.

Judiciary administrator Esther Leung Yuet-yin said the judiciary would fully utilize all facilities currently available, and noted that some court facilities will be expanded.

The Judiciary is also hiring more judges to speed up the handling of piled-up cases.

Authorities hoped that those cases could be cleared within two to three years, with the Court of First Instance of the High Court handling 2,000 cases per year and the Court of Appeal tackling 1,000 cases each year.

As for the concerns over the progress of the review on legal aid services, director of administration Daniel Cheng Chung-wai, from the Chief Secretary for Administration's Office, said the review was nearly completed.

Some of the concerns proposed include the criteria of granting legal aid and whether designated lawyers should be allowed.
Add Comment