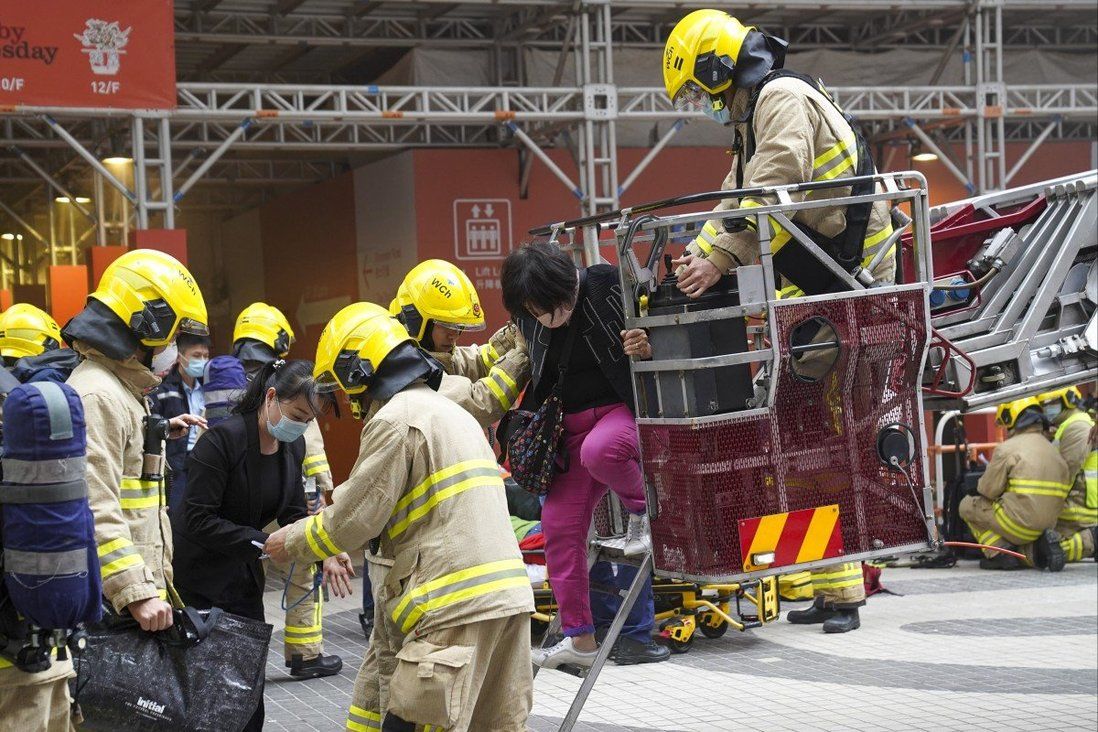 Thirteen people injured, while many others were trapped for as long as two hours while firefighters worked to extinguish the blaze.

Nearly 1,300 people were evacuated from a skyscraper that caught fire in downtown Hong Kong on Wednesday, sending hundreds fleeing to the rooftop as others struggled through dense smoke in search of an exit from the “maze-like” building.

Firefighters managed to get everyone out of the 40-storey World Trade Centre in Causeway Bay, but 13 people were injured, at least one critically, according to authorities. Some people were trapped for as long as two hours, and firefighters took four hours to extinguish the blaze.

The fire started at 12.37pm on the first and second floors of the building housing a mix of offices, shops and restaurants, and was related to an electrical meter room, the Fire Services Department said.

The fire then spread to scaffolding erected on the lower levels as part of renovation work on the nearly 50-year-old tower.

Due to the construction, fire-prevention installations, such as the auto-sprinkler system, manual fire alarm and fire detectors, had been turned off, it revealed.

“There was no fire alarm,” said a 28-year-old diner at a restaurant on the 13th floor, who joined others in deciding to cover their faces with wet towels and flee down a staircase.

A total of 176 firefighters and 24 ambulances were deployed to the scene.

Many diners and office workers on the upper levels said they were unaware of what was happening until dense smoke spread to their floors.

According to police, more than 100 people took shelter on the fifth-floor podium as the rear staircases were filled with smoke, making passage difficult. 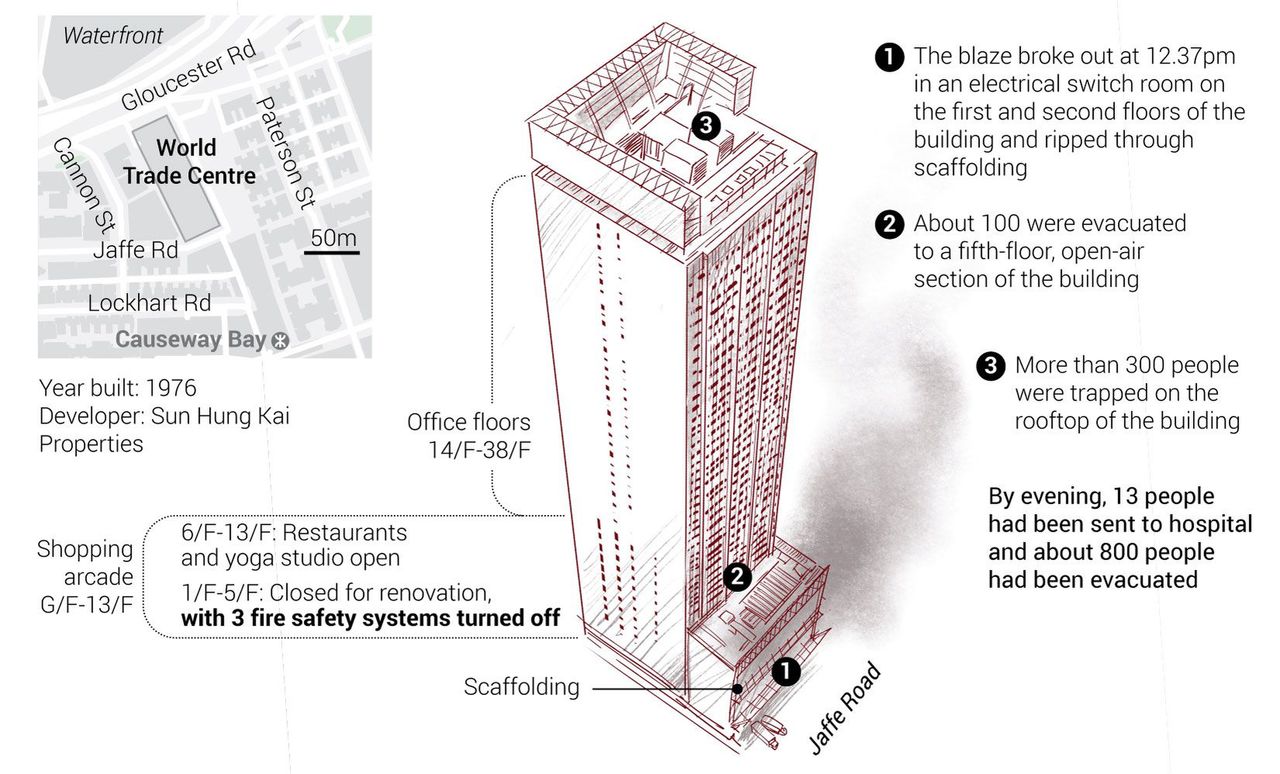 Firefighters used an extendable ladder to rescue some of the people trapped in the open area, while the others gathered at the spot were led to safety by firefighters equipped with breathing apparatuses.

About 350 people, many of them office workers, fled to the roof. Some later chose to walk all the way down to the ground floor via staircases instead of waiting for instructions from the firefighters. The ones who chose to remain were asked to take lifts down shortly after 3pm.

At least 13 people, aged between 25 and 60, were injured. Ten suffered from smoke inhalation, including a 60-year-old woman sent to Ruttonjee Hospital in Wan Chai, where she was listed in critical condition.

Fire department senior divisional officer Ng Yau-sheung said all shops located between the first and fifth floors had been vacated due to the renovation and the fire service installations were switched off. 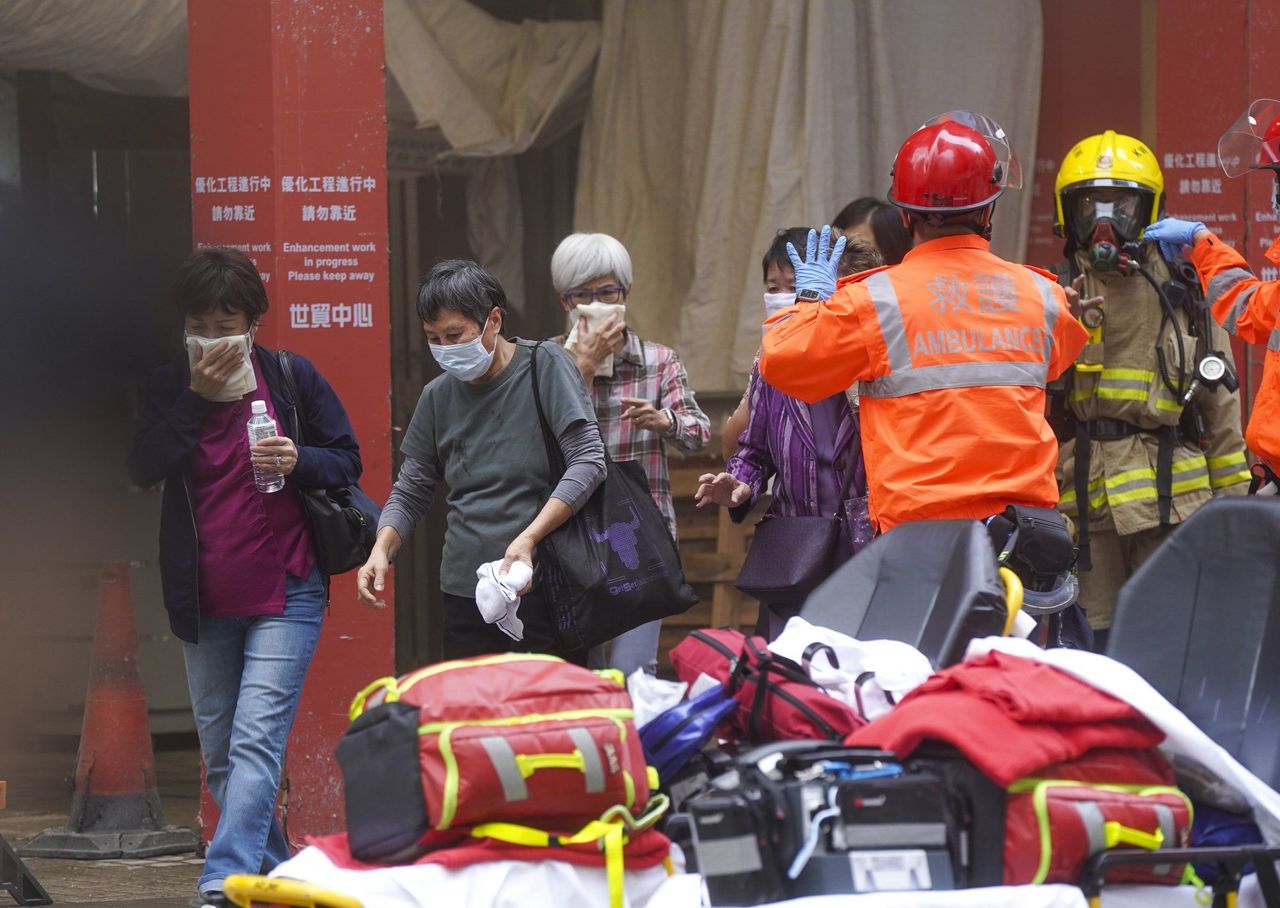 First responders guide people out of the building.

Only restaurants between the sixth and 13th floors, as well as offices between the 14th and 38th floors, were still operating. Fire service installations on those floors were functioning normally, according to Ng.

Asked whether the fire protection measures should have been turned off, Ng said the department had been informed about the move and would follow up to ensure the building was safe before allowing it to reopen.

“We will follow up and evaluate whether extra fire service installation is needed,” he said. “We will request the contractor to enhance the installation if needed.”

A female manager of a 12th-floor restaurant, which was busy serving 80 people when news of the fire emerged, said staff noticed smoke coming from the stairwell at around 12.45pm.

“We called the management hotline multiple times but there was no response,” said the woman who only gave her surname, Gu.

“We quickly gathered the customers and grabbed some towels and evacuated [to the ground floor]. We had to bend low as the smoke was swelling up in the staircase.” 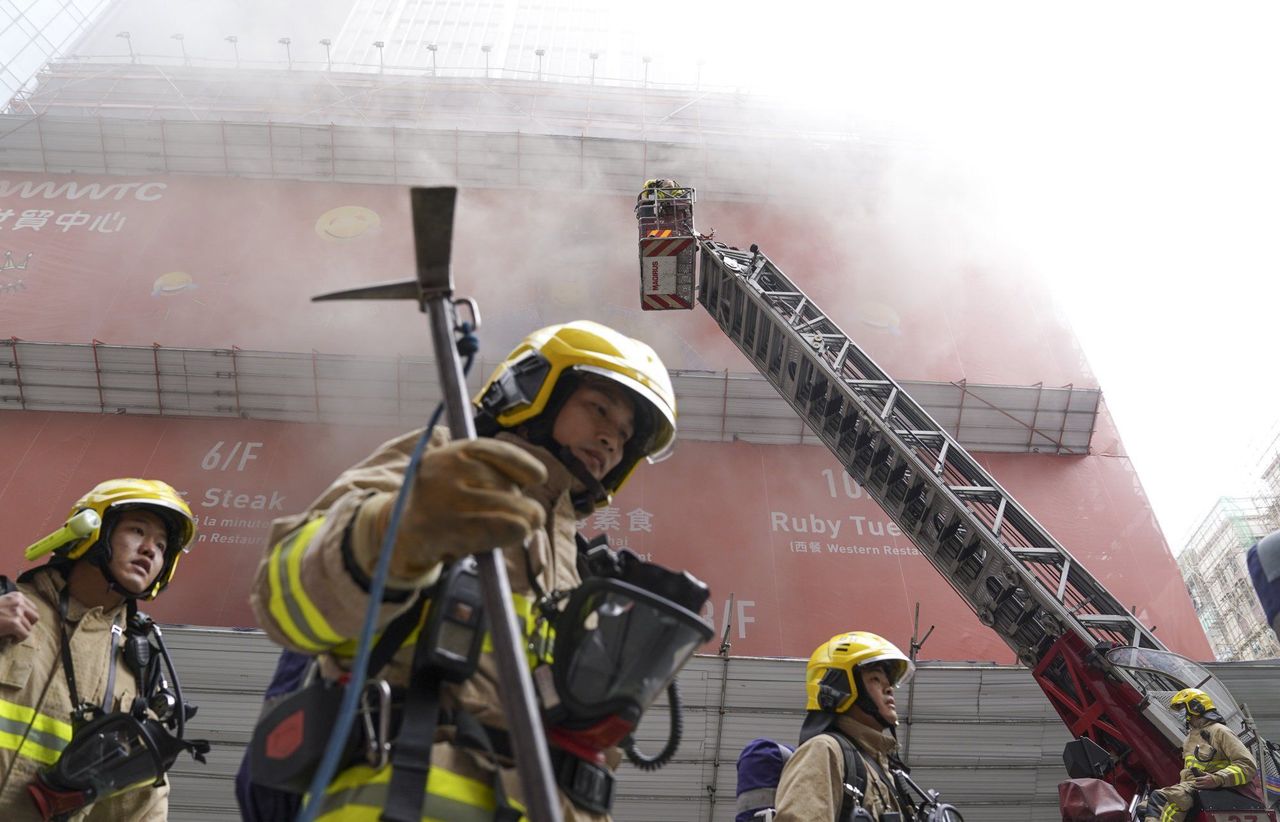 Scaffolding was erected around the lower floors of the building as part of renovation work.

Renovation worker James Ng, who was based on the third floor, which was blocked off to the public, said only two exits were available due to the renovation, rather than the usual four.

The number of lifts servicing the restaurant floors had also been reduced from four to two, he added.

“All the shops on the third floor are boarded up, some escalators only run in one direction while others are not functioning,” he said. “It’s like a maze inside. You will get lost if you’re not familiar with the place.”

Office worker Ernest Chan was among the hundreds who had fled to the roof. He managed to make his way back down using the staircase after a long wait.

“Initially we were walking down but at around the 17th floor we heard that there was heavy smoke, so we decided to head to the roof instead,” the 28-year-old said.

When visibility improved, he joined others in trying again and they managed to get out.

Lucas Lam, 25, who works in the building, described escaping with a group of colleagues.

“As we work on the 32nd floor, at first we remained on [the roof] to stay away from the heavy smoke,” he said.

They were told to stay put for up to two hours so the air could clear, but he and several others felt they could not wait that long and managed to locate stairs that offered a way out. 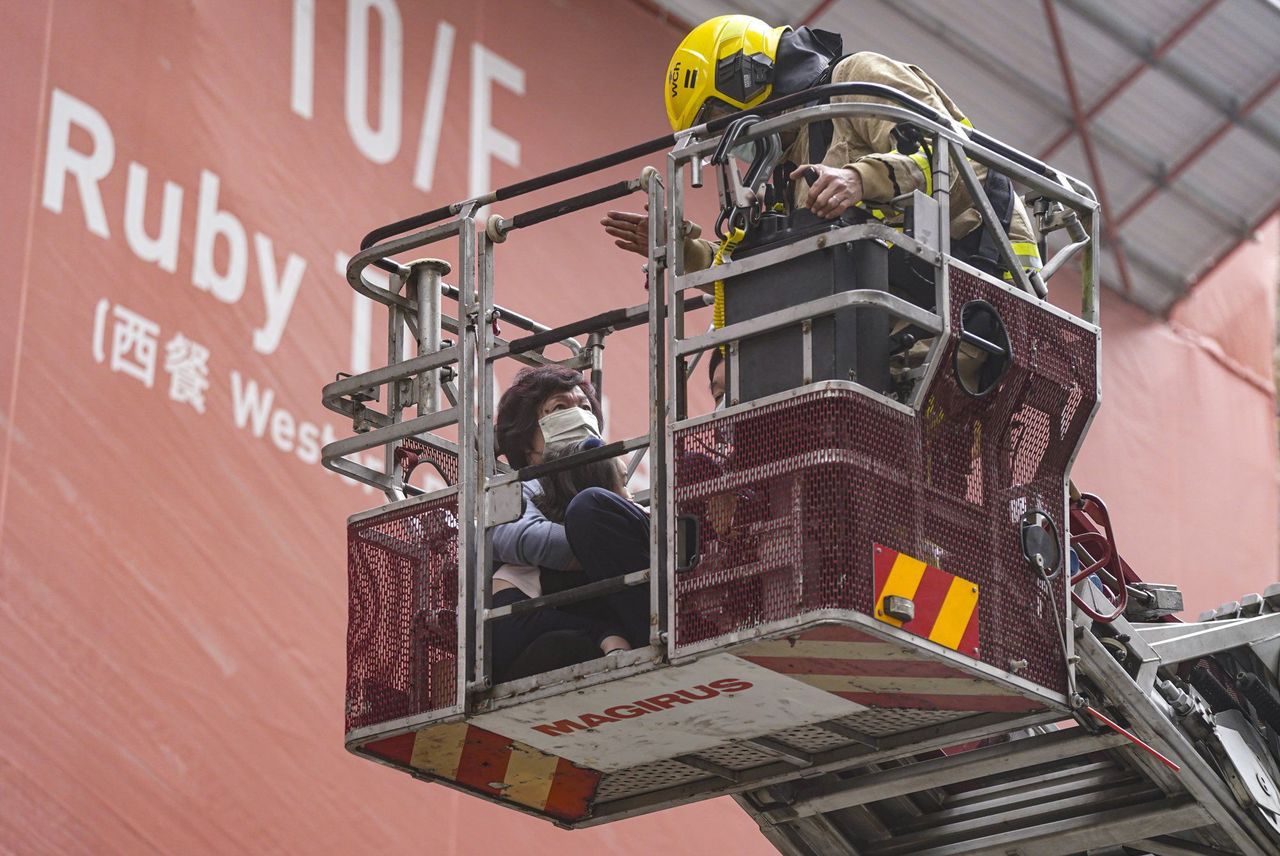 A firefighter with a woman rescued from the building.

Firefighters gave permission for the people remaining on the roof to take the lifts down shortly after 3pm. Among them was Kelly Chow, who works with a tour company on the 22nd level.

“People were rushing up the staircase towards the roof. When some attempted to open the door to a stairway on the 30th floor, more smoke rushed in,” she said.

“After two hours, we were instructed to go down to the 38th floor and take the elevator down in groups of 14. One or two people needed oxygen masks.”

According to the fire department, extinguishing the blaze was made difficult by the large area involved – a space measuring about 100 metres by 30 metres (330 feet by 100 feet).

“When firefighters arrived at the scene, the smoke was very heavy,” Ng said. “One of the biggest difficulties that we encountered is that the floor area of the building was large and we had received multiple calls for assistance.”

The fire was largely out by 4.30pm, and officers were investigating the cause, he added.

According to information on the website of the Fire Services Department, buildings taller than 25 storeys but not exceeding 40 can count the main roof as a refuge floor – a protected area for occupants to gather temporarily and rest in the event of a blaze.

Such a floor should have adequate cross-ventilation and be equipped with fire service installation and equipment as officially required.

The developer said it would fully cooperate with authorities in the investigation.

But it did not respond to queries about whether the building’s sprinklers were working or whether they met the fire department’s requirements. 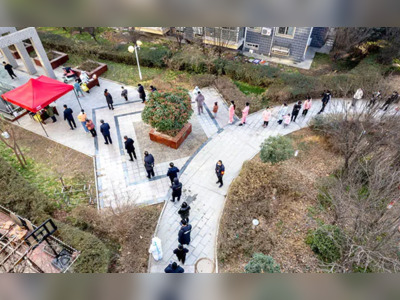 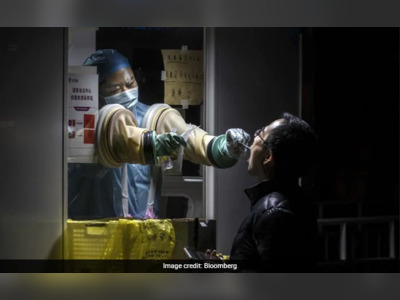 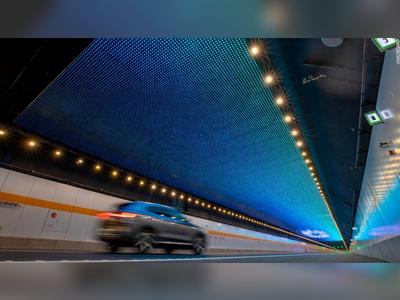