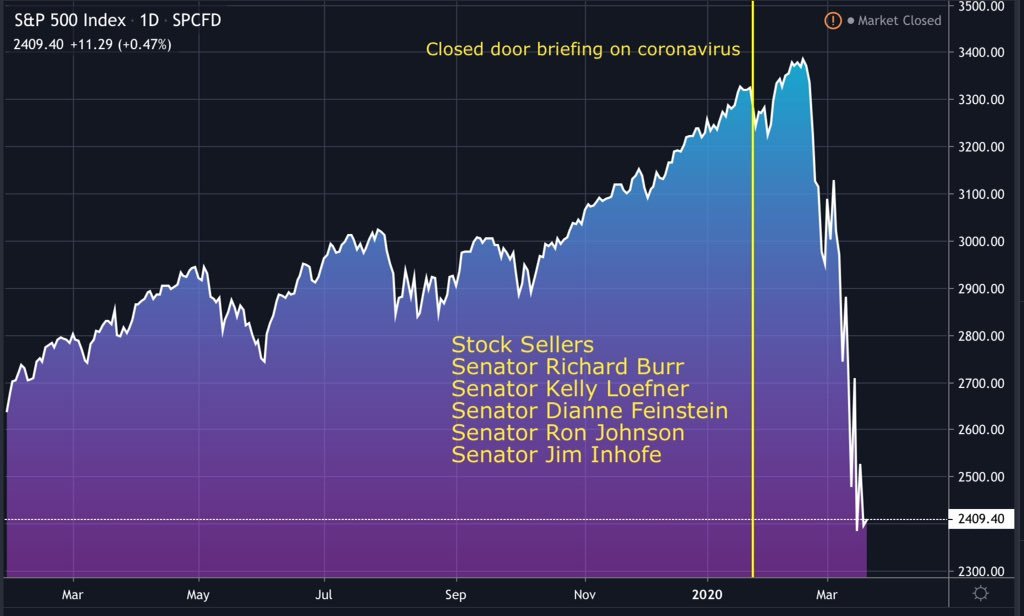 Senate Intelligence Chairman Richard Burr and several other senators are facing scrutiny over their sales of stocks last month, ahead of the economic downturn sparked by the coronavirus pandemic
Sen. Dianne Feinstein of California and three of her Senate colleagues reported selling off stocks worth millions of dollars in the days before the coronavirus outbreak crashed the market, according to reports.

The data is listed on a U.S. Senate website containing financial disclosures from Senate members.


Feinstein, who serves as ranking member of the Senate Judiciary Committee, and her husband sold between $1.5 million and $6 million in stock in California biotech company Allogene Therapeutics, between Jan. 31 and Feb. 18.

Feinstein defended herself in a series of tweets on Friday, saying she has "no control" over her assets and the stocks in question were her husband's transactions.

"During my Senate career I’ve held all assets in a blind trust of which I have no control. Reports that I sold any assets are incorrect, as are reports that I was at a January 24 briefing on coronavirus, which I was unable to attend," she tweeted.

"Under Senate rules I report my husband's financial transactions. I have no input into his decisions. My husband in January and February sold shares of a cancer therapy company. This company is unrelated to any work on the coronavirus and the sale was unrelated to the situation."

When questioned by the newspaper, a spokesman for the Democrat from San Francisco also said Feinstein wasn’t directly involved in the sale.

“All of Senator Feinstein’s assets are in a blind trust,” the spokesman, Tom Mentzer, told the Times. “She has no involvement in her husband’s financial decisions.”

Reports identified the three other senators as Richard Burr of North Carolina, Kelly Loeffler of Georgia and James Inhofe of Oklahoma, all Republicans.

Burr, chairman of the Senate Intelligence Committee, used more than 30 transactions to dump between $628,000 and $1.72 million on Feb. 13, according to ProPublica.

The report said the transactions involved a significant percentage of the senator’s holdings and took place about a week before the impact of the virus outbreak sent stock prices plunging to the point where gains made during President Trump’s term in office were largely erased.

“Senator Burr filed a financial disclosure form for personal transactions made several weeks before the U.S. and financial markets showed signs of volatility due to the growing coronavirus outbreak,” a Burr spokesperson said. “As the situation continues to evolve daily, he has been deeply concerned by the steep and sudden toll this pandemic is taking on our economy.”

On Friday, the senator tweeted an updated statement saying he relied only on "public news reports" to guide his decision on the sale. Still, he said he's asked for a Senate Ethics Committee review of his actions.

Burr was an author of the Pandemic and All-Hazards Preparedness Act, a law that helps determine the federal response to situations such as the coronavirus outbreak, ProPublica reported. Burr’s office would not comment on what kind of information Burr might have received about coronavirus prior to his stock sales, the outlet reported.

“ There’s one thing that I can tell you about this: It is much more aggressive in its transmission than anything that we have seen in recent history,” Burr said at a Feb. 27 meeting of business leaders in Washington. “It is probably more akin to the 1918 pandemic.”

Loeffler was appointed to the Senate in December by Georgia Gov. Brian Kemp after incumbent Sen. Johnny Isakson resigned because of health issues – despite allies of President Trump having urged Kemp to select Rep. Doug Collins instead.

Loeffler and her husband, Jeffrey Sprecher, chairman of the New York Stock Exchange, sold stock Jan. 24, the same day she sat in on a briefing from two members of Trump’s Coronavirus Task Force, The Daily Beast reported.

Between that day and Feb. 14, the couple sold stock worth a total between $1.2 million and $3.1 million, the report said. In addition to the sales, they also purchased stock in a maker of software that helps people work at home – just before millions of Americans were forced to leave their offices because of the outbreak, the report said.

Loeffler slammed the Daily Beast report as a "ridiculous and baseless attack" in a pair of late-night tweets.

“ This is a ridiculous and baseless attack. I do not make investment decisions for my portfolio. Investment decisions are made by multiple third-party advisors without my or my husband's knowledge or involvement," Loeffler wrote. "As confirmed in the periodic transaction report to Senate Ethics, I was informed of these purchases and sales on February 16, 2020 — three weeks after they were made."

In an interview Friday with Fox News’ Ed Henry, Loeffler again said any claim of insider trading is “absolutely false.”

She added, “I’m not involved in the decisions” of buying and selling, while saying she’d cooperate if any investigation is launched.

Inhofe sold as much as $400,000 in stock all on Jan. 27, in companies such as PayPal, Apple and real estate company Brookfield Asset Management, The New York Times reported.

But in a written statement, Inhofe pushed back by saying he was not at a late January briefing and, further, does not have involvement in investment choices.

The statement said: “The New York Times allegations are completely baseless and 100 percent false. I was not at the briefing on January 24. I was meeting with pro-life kids from Oklahoma here for the March for Life and the new nominee to be U.S. Ambassador to Tanzania. I do not have any involvement in my investment decisions. In December 2018, shortly after becoming chairman of the Senate Armed Services Committee, I instructed my financial advisor to move me out of all stocks and into mutual funds to avoid any appearance of controversy. My advisor has been doing so faithfully since that time and I am not aware of or consulted about any transactions.”
Add Comment