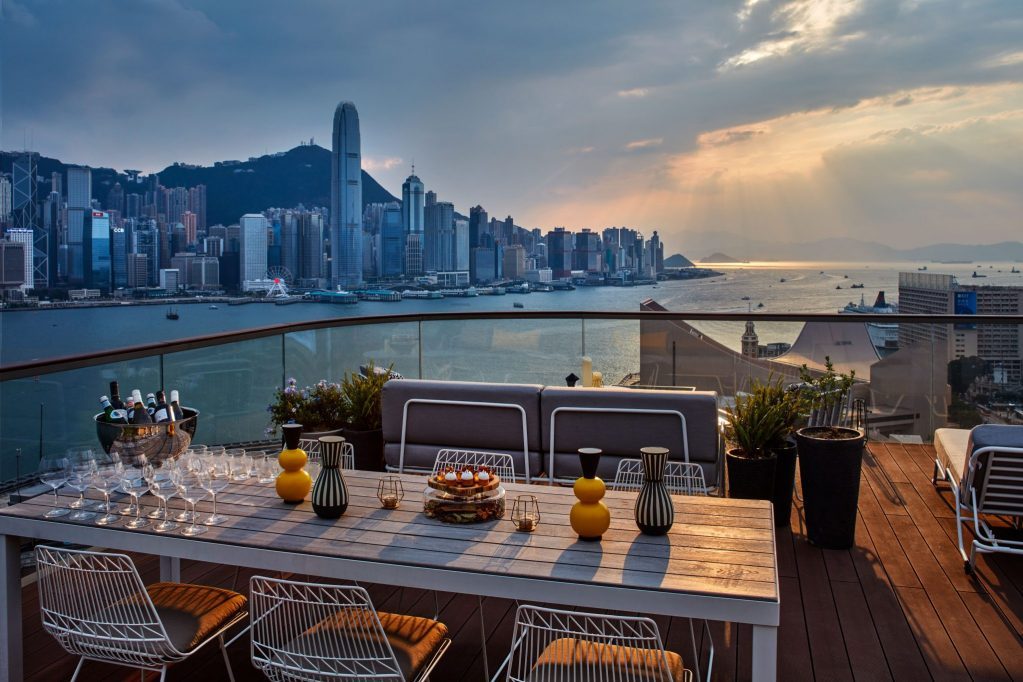 Two of Hong Kong’s biggest real estate developers with deep hospitality interests have each gone ahead and opened a hotel in the city despite pro-democracy protests that have been raging on for more than six months.

Sun Hung Kai Properties, which owns a slew of hotels such as the Ritz-Carlton, Four Seasons, W in Hong Kong, and others under its own brand Royal Hotels, opened Alva Hotel by Royal this week, offering a whopping 618 rooms in Shatin’s River East neighborhood. Alva signifies a new expansion of Sun Hung Kai Hotels, the hotels arm of the company, into modern design and technology hotels, its website says.

New World Development Company last week officially announced the opening of K11 Artus to the media following its soft launch in July. The ultra-luxury property offers 287 studio to three-bedroom serviced residences, many with views of Victoria Harbor, and is part of the group’s Victoria Dockside development that is overseen by its executive vice chairman and general manager, Adrian Cheng, brother of Rosewood Hotel Group CEO Sonia Cheng.

Both projects have been in the pipeline for some time. When asked at the media launch of Alva why Sun Hung Kai Properties was going ahead with the opening, its executive director Adam Kwok was reported as saying, “We are in a difficult time, but we give our full heart to operate. With this hotel, we are offering good quality at a very affordable price. People will come.”

Kwok said in a Bloomberg report that the group’s hotel revenue had fallen by as much as 40 percent in November and December due to the unrest. He forecasted a 30 percent decline in hotel revenue for the second half of 2019.

Victoria Dockside sits on the site formerly known as Holt’s Wharf, the first generation of the area, which was an important godown (wharf) in Tsim Sha Tsui that dates back to 1910. The historic logistics hub eventually made Hong Kong one of the busiest ports in the world.

The second generation of the area started when New World acquired the plot of land by the harbor in 1971 and built New World Centre, which opened in 1978. Cheng’s K11 ecosystem at Victoria Dockside, a $2.6 billion development, is the third generation project of the site. Aside from K11 Artus, it comprises a cultural/retail landmark called K11 Musea, a network of office buildings for the next-generation workforce called K11 Atelier, and the Rosewood Hotel Hong Kong, which opened in March.

“After years of planning, Adrian Cheng’s vision has reinvigorated the waterfront through a number of cultural projects which have opened in the area. K11 Artus reinvents luxury living through its unique concept of the artisanal home and remains committed to bringing something completely new to Hong Kong and Asia,” said Cunningham.

The worst crisis since SARS has kept the industry’s eyes watchful on whether hotel chains will relocate their headquarters from Hong Kong. The two hotel openings this year may be seen as a show of confidence and may quell speculation that chains might leave the troubled city. Thus far, however, none has been known to move or contemplate a relocation.

The only exception is Caesars Entertainment in Asia, although this has nothing to do with a relocation but its decision not to pursue international development, including the casino license in Japan, according to an internal source. Caesars has let go a lot of people in both its Hong Kong and Tokyo offices as a result, retaining only a skeletal staff in Hong Kong as it has an integrated resort under construction in Incheon, South Korea, said the source. Skift wasn’t able to reach Caesars Entertainment in Asia for a comment at press time.

Global hotel chains such as Marriott International maintains its Asia-Pacific headquarters in Hong Kong but has main offices in Singapore and Shanghai (read our report on How Global Chains Differ in Approach to Asia-Pacific’s Huge Opportunity for other international chains’ Asia-Pacific coverage).

A relocation expert Skift spoke to finds it inconceivable that the homegrown names would move. One argument is many of them receive a notable chunk of their revenue in China and are expanding in the mainland. Relocating from Hong Kong to, say, Singapore, might incur China’s wrath.

Sun Hung Kai, for instance, also owns the Ritz-Carlton in Shanghai, St. Regis Beijing, Park Hyatt Hotel Hangzhou, and Conrad Guangzhou in China, and it’s opening a Four Seasons in Suzhou and an Andaz in Nanjing, both in 2020. Another five-star hotel is being developed in Chengdu, with no decision yet on a third-party management company.

“[To-date] there haven’t been any announcements on potential thoughts on moving their head offices away from Hong Kong,” said the source, on the condition of anonymity.

“Most companies still cling onto one of Hong Kong’s major advantages over Singapore — its proximity to the PRC (People’s Republic of China). Therefore, we may have to look at how China-dependent each of these hotel groups is, looking at their share of PRC revenue and where their upcoming new hotel projects will be. As a rising number of multinational firms is backing down from opposing Beijing in order to remain strong in the China market, moving the headquarters away might be a harmful strategy.”

Other advantages that point to companies sticking with Hong Kong are “a lack of bureaucracy, easier capital outflow, Internet freedom, good infrastructure, international living standards, particularly for families and education (although China is not far behind), and then, of course, lower corporate income tax, no turnover tax as opposed to the PRC, and mostly lower-taxed salaries,” said the source.

But with no certainty as to how the Hong Kong situation will end, it remains a question mark how long chains can keep faith.

Hotels are suffering. A search on Wednesday on Agoda for a stay at K11 Artus from December 21 to 25 shows room availability and a rate of $350 — unbelievable for an ultra-luxurious harbor view room at Christmas time.

At the launch of Alva, Kwok urged the government to help the hotel industry, saying it should refer to the stimulus policies employed during the 2003 SARS crisis.
Add Comment