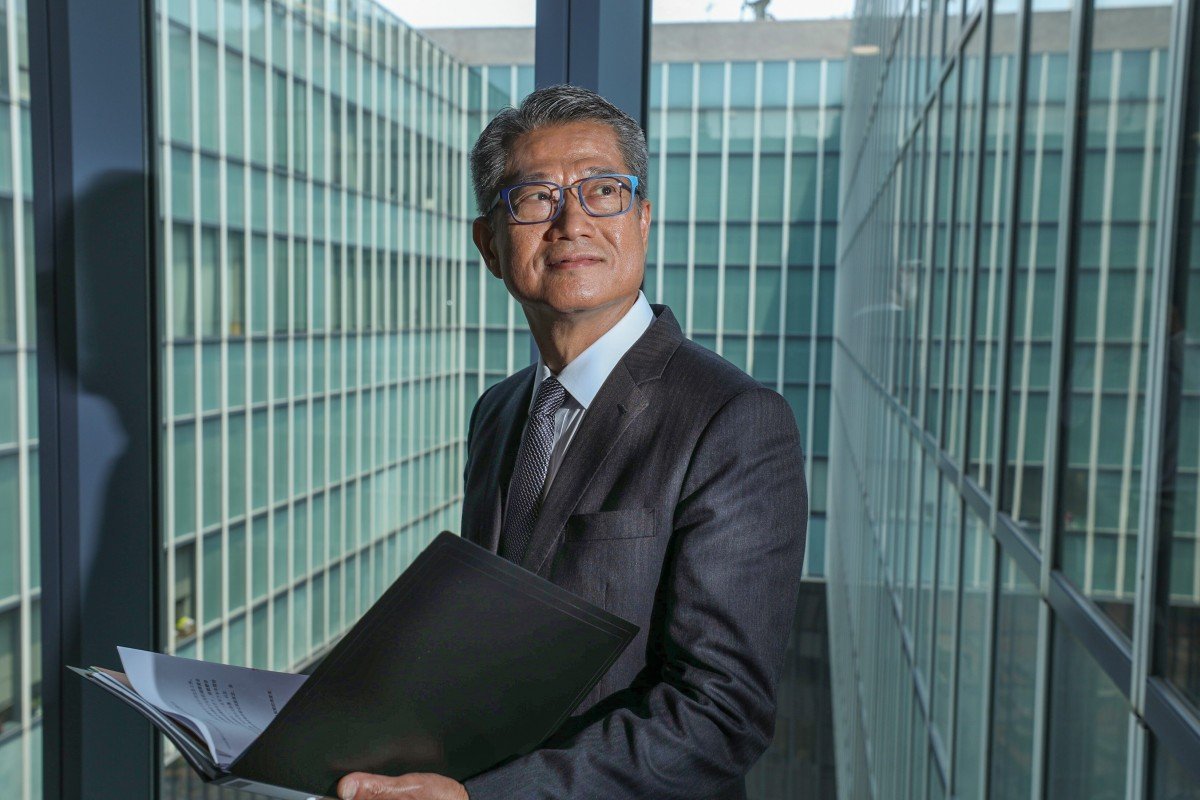 A currency-swap mechanism with the People’s Bank of China and a new US Federal Reserve deal are available to thwart speculators targeting the city. Even with a deficit that could hit HK$300 billion, the financial secretary does not anticipate issuing bonds, which could be interpreted as a lack of financial discipline

Hong Kong is capable of withstanding any currency attack, even as it digs deeper than ever before into its fiscal reserves to survive the coronavirus crisis, and the budget deficit may hit HK$300 billion (US$38.7 billion), according to Financial Secretary Paul Chan Mo-po.

Chan struck a reassuring tone in an exclusive interview with the Post, a week after he warned the city’s reserves would plunge from HK$1.1 trillion to about HK$800 billion, equivalent to about 15 months of public expenditure.

With the government spending more than HK$137 billion on a massive relief package for ailing businesses in an economy ravaged by the Covid-19 pandemic, the budget deficit is expected to balloon beyond HK$276.6 billion, accounting for 9.5 per cent of GDP.

Chan warned the deficit might surge to HK$300 billion by the end of the financial year, given the worsening business environment and possible reduction in land revenue, but he remained confident the city would still be able to fend off any currency attack.

“We have been very careful as the risk is very genuine since the [anti-government] protests last year,” Chan said when asked if smaller reserves could withstand attacks.

He revealed that the GDP forecast for this year – a contraction of 1.5 per cent – was likely to be adjusted further downwards, while the unemployment rate would continue to rise despite relief measures to retain employment.

But Chan was against the idea of raising more funds by issuing bonds, cautioning that it might be misinterpreted as a sign the city was loosening its financial discipline – which would go against a Basic Law provision that Hong Kong should strive to achieve a fiscal balance.

“The government does not only rely on fiscal reserves to fend off attack; we have made available some other monetary resources by making new arrangements [with various monetary authorities],” Chan said.

Hong Kong’s currency has been pegged to the US dollar since 1983, and the Hong Kong Monetary Authority (HKMA) is currently required to keep it trading within 7.75 and 7.85 to the US dollar. If it hits either end of the scale, the city’s de facto central banker is obliged to step in to buy or sell the currency to ensure it stays within its target band.

The city has been targeted in the past by speculators betting on the Hong Kong dollar and pushing down the stock market.

A new arrangement to fend off such attacks is a currency-swap mechanism set up with the People’s Bank of China, which Chan said had offered “unreserved support” for Hong Kong.

Chan said the government was well prepared to increase US dollar liquidity, especially at a time when American stock markets were being ravaged by the pandemic.

He said under a recent agreement with the US Federal Reserve, the HKMA could use debt securities issued by the US Treasury in exchange for American currency to provide liquidity to banks in Hong Kong.

The government was watching out on a daily basis for any unusual, concerted transaction efforts in both currency and futures markets, he said.

In terms of financial security, Chan cited the rich liquidity of HK$4.4 trillion in the local banking sector and foreign currency reserve assets of more than US$440 billion under the Hong Kong Exchange Fund.

The government was also keeping an eye on whether rounds of quantitative easing by the US central bank would create an economic bubble, he added.

“The government has to be prepared for the worst, yet hope for the best,” Chan said. “While both the International Monetary Fund and the World Trade Organisation have predicted a global recession, the mainland’s economic growth is still a positive figure, despite slower growth.”

The economic outlook was shrouded in uncertainty, he noted, and it would hinge on the pandemic as well as the strained Sino-US relationship.

“But with the new drive from the Greater Bay Area development, and if we can further develop on our strengths, I still remain hopeful,” he said, referring to Beijing’s plan to transform Hong Kong and 10 cities around the Pearl River Delta into a thriving global centre of technology, innovation and economic vibrancy.

Chan said it was encouraging that Prudential plc, one of the top global life insurers, had decided to base its operation in Hong Kong after its demerger from M&G plc in October 2019. He cited it as a fine example of how the city could lure major international corporations by leveraging its core strengths and competitive advantages.

But Chan lamented the stalling of the relevant Insurance (Amendment) Bill at the Legislative Council, due to filibustering by opposition lawmakers, warning it might affect Prudential’s move. The bill is aimed at improving the city’s regulatory regime to reinforce its status as a preferred base for major insurance companies.

While pan-democrat politicians are complaining of “interference” in Hong Kong’s internal affairs after Beijing accused them of abusing their power to block bills related to economic and livelihood issues, Chan defended the central government’s authority to speak out.

He urged lawmakers to approve the coronavirus relief package on Friday.

“The city can’t afford an impasse for this package. The unemployment rate will rise, liquidation cases will shoot up and it will affect confidence in the business environment. The economy is spiralling down fast,” he said.

A key part of the package is a government scheme to subsidise staff wages for half a year for businesses hit hard by the pandemic so workers can remain in their jobs.

“There’s a family behind each job; I hope [lawmakers] will look at the bigger picture,” he said.