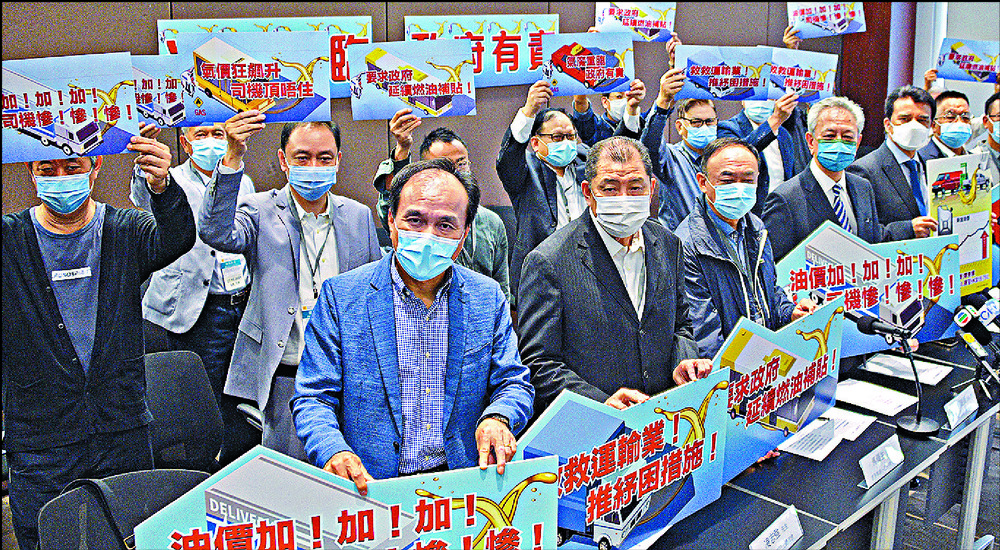 The transportation sector urged the government to resume fuel subsidies for minibuses, taxis and trucks as prices increased by as much as two times in the past year, causing over 1,000 drivers to quit.
Transport sector lawmaker Frankie Yick Chi-ming yesterday said the government once provided a fuel subsidy for buses, minibuses and taxis using the anti-epidemic fund last year.

"The subsidy gave the transport sector breathing room and improved the income of taxi and bus drivers, bringing back many drivers who have left the industry," Yick said.

However, since the government's fuel subsidies ended in June, transport costs have skyrocketed, he said.

"Fuel is a necessity ... the surge in fuel price will eventually pass on to citizens. Therefore, it will not only affect the transport industry, but all Hongkongers," Yick said, urging the government to extend the subsidy for another year.

Stanley Chiang Chi-wai, chairman of the Hong Kong Land Transport Council, said fuel costs account for 30 percent of the operating expenses of commercial vehicles and the price of diesel has risen by 40 to 50 percent since the pandemic began.

The volume of local passengers has not returned to pre-pandemic levels and there are also no visitors from the mainland or overseas, he said.

Ng Kwan-sing, vice chairman of the Hong Kong Taxi Council, said over 1,000 taxis were left idle of the 18,000 total taxis in Hong Kong, with no drivers willing to drive at night.

"There are no visitors now, and people are not as active at night. The fuel cost has also almost doubled in the past year," Ng said.

"When the fuel is so costly, taking up some HK$100, but we can only get HK$200 to HK$300 in revenue, we really hope the government will help us out with fuel subsidies even if it is a few hundred dollars," he added.

"The surging fuel prices have added to our burden, with morning shift drivers using HK$60 to HK$80 more for fuel, while night shift drivers have had their costs pumped up by HK$80 to HK$160," Ling said.

"The fuel price is now even pricier than the rent for the minibus," he added.

Robert Ma Kiu-sang, director of Koon Wing Motors - the biggest operator of green minibuses routes, said there is actually no competition between gas companies. While they were quick to increase prices together, they are now reluctant to reduce them.
Add Comment