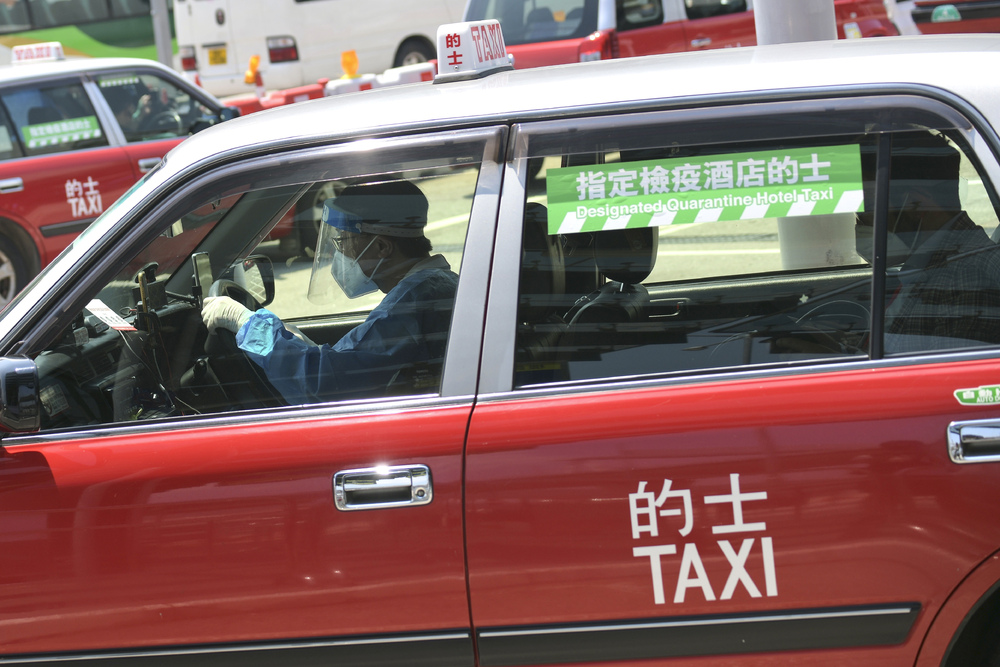 Designated Covid taxi caught picking up passengers off the street

A taxi that should only send inbound travelers to designated quarantine hotels was caught taking street passengers onboard, raising concerns that the breach may lead to the collapse of authorities’ closed-loop Covid management.
The issue came under the spotlight as broadcaster Cable News reported about 10 percent of the Covid taxis offered only one to two rides a day at most, after spending hours observing the fleet at the airport on a Sunday, with about 60 flights arriving that day.

Over 70 taxis offered four or more rides that day, and 13 even traveled six to seven times within their 12-hour shift. However, over 20 taxis traveled up to three times only, including eight offering one to two rides a day.

Each of these taxis – offering rides 7am to 2am – can be compensated HK$1,500 a day by the government regardless of the number of rides they offer, and they can still charge passengers according to the taxi meter on the way to the quarantine hotels.

Cable News also followed a taxi that day, which left the airport and arrived at a quarantine hotel in Sha Tin about half an hour later. The driver then headed to a gas station and pulled over for about two minutes before traveling to Chung On Shopping Centre in Ma On Shan and picking up two street passengers – by then the designated Covid taxi label on the window had been removed.

The label reappeared on the taxi’s window about two hours after the taxi dropped the two passengers in a Tsuen Wan housing estate and returned to the airport.

When approached by Cable News, the driver denied having picked up street passengers, adding they had the wrong driver. Yet, the driver admitted he also worried about the risk of spreading the coronavirus.

The taxi fleet that employed the driver later confirmed that the driver was fired and added they have been asking drivers to report their whereabouts starting this week.

Chow Kwok-keung, the chairperson of the Hong Kong Taxi and Public Light Bus Association Ltd, said, “Driving the taxis for other businesses during work could never be tolerated.”

“It is your social responsibility to provide agreed services after getting paid. We are not going to work with people who break the rules for their own interests,” Chow added.

Chow’s company and three other taxi companies have together launched a new platform worth over HK$100,000 to monitor the whereabouts of the Covid taxi starting this week, as Chow called on drivers to discipline themselves.

The Transport and Logistics Bureau said the driver has been banned from driving the Covid taxi, and authorities will enlarge the label of the Covid taxi for better identification. Yet, the bureau noted that it seems inappropriate to regulate the number of rides because it may be affected by other factors like traffics and drivers’ physical condition.
#Coronavirus  #Covid
Add Comment