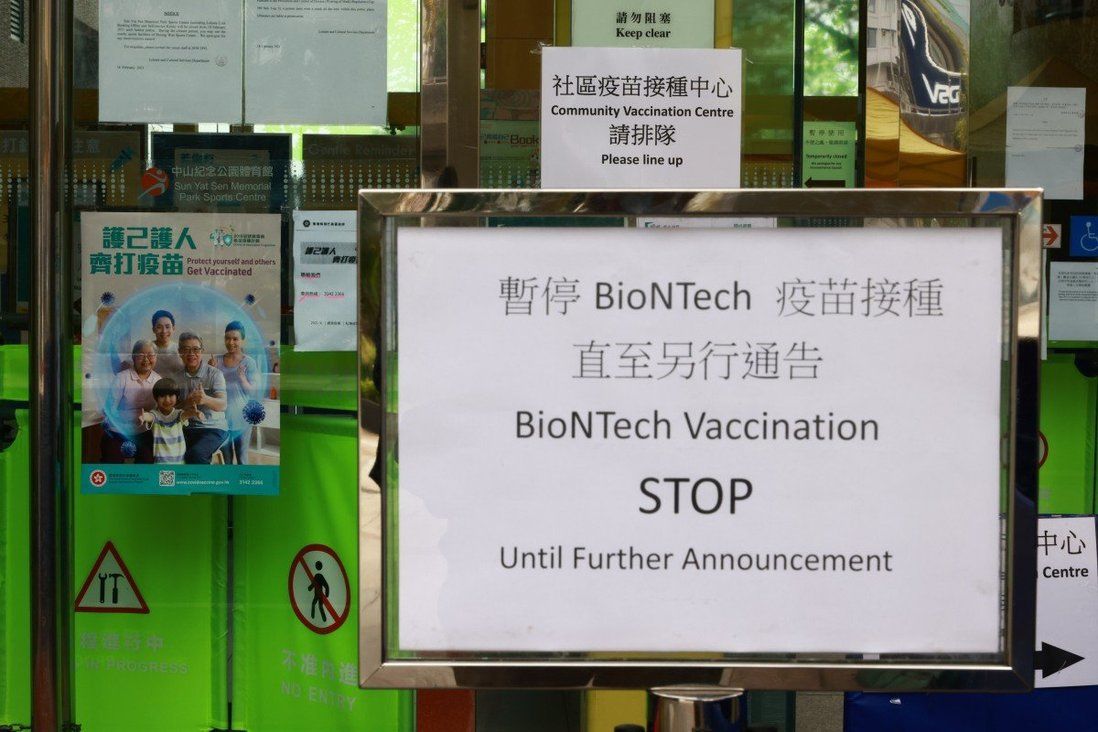 Problems in the sealing process of the Pfizer-BioNTech vaccine vial caps may have caused the defects in existing batches of the German-made jabs delivered to Hong Kong, the city’s health director has revealed.

The remaining vials would be kept in ultra-cold storage until the manufacturer completed its full investigation, Director of Health Dr Constance Chan Hon-yee said at a press conference on Thursday, and assured the public no safety risks had been uncovered.

Chan said the cause of the defects was because of the crimping of the vials, a process by which pressure is applied to the aluminium ring that fixes a plastic stopper, while ultra-cold storage conditions also played a role.

The investigation conducted by BioNTech found that there were problems in the crimping process at the German site that provided batch 210102 and 210104, Chan added.

Distribution of the vaccine was abruptly paused last Wednesday on the advice of its supplier after the scheme’s frontline staff reported more than 50 instances of defective vials, including cracks, leaks and stains on their exterior. Hong Kong has so far received 1.343 million doses of the BioNTech vaccine for its inoculation programme.

In Hong Kong, mainland Chinese company Fosun Pharma is in charge of delivering the vaccine jointly developed by German-based BioNTech and US-based Pfizer.

On Thursday, senior officials announced that Covid-19 vaccinations for BioNTech in Hong Kong will resume next Monday after a 12-day suspension, while those whose bookings were scheduled during the temporary halt will be allocated new time slots that can be changed when the booking system reopens at 9am on Saturday.

The government will also assign new time slots for those who had booked their first shots to take place during the suspended period.

About 183,000 people had booked to receive either their first or second dose of BioNTech during the suspended period. Among them, about 30,000 people were expected to get their second jab and would need to be vaccinated as soon as possible to develop immunity.

Those scheduled to take their second shot on April 4 or earlier will now be allocated a time slot between April 5 and 10. Those whose bookings were already scheduled for April 5 or beyond can show up for vaccination according to their original schedule and with no rebooking needed.

The vials have a plastic plug with a metal ring on the outside to secure the vaccine content, and Chan said the flexibility of the plastic stopper would be affected under the ultra-low temperature of minus 70 degrees Celsius required to store the vaccine.

Under the sub-zero temperature, air could seep into the vial if the metal ring was not tightly sealed. When the vials are thawed at 2 to 8 degrees Celsius, the plastic stopper regains its elasticity, restoring the tightness of the cap seal.

While an initial investigation showed the defective vials did not pose any safety risks, Chan said health authorities would keep the current stockpile of unused BioNTech shots on hold in storage facilities until the manufacturer completed its full report.

“I think it would not be correct to overrule the manufacturer’s recommendation,” she said, in response to questions on why health authorities decided not to use the existing batches when no safety and efficiency issues had been detected.

“I think it’s important [to have] a prudent approach, to follow the manufacturer’s recommendation to suspend the use of the concerned batch.” 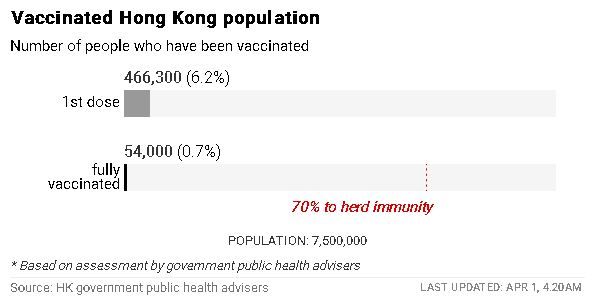 The new doses will arrive from a facility in Germany under American firm Baxter, which partnered with BioNTech in manufacturing the jabs. No problems were found after repeated checks were conducted on some 15,000 vials of the newly packaged vaccines before they were scheduled to be shipped, Chan said.

Secretary for the Civil Service Patrick Nip Tak-kuen, who oversees the inoculation programme, said the city would get new supplies of the vaccine shots from its manufacturer and distributor if necessary.

“For the [arrangements of the] present two batches, we will have to look at the pharmaceutical company’s decision,” Nip said. “They would have to complete the investigation and they will explain to us clearly and then we will work accordingly.”

However, Nip was unable to say exactly when the final results of the investigation would be released and whether the city would use the remainder of the suspended batches.

William Chui Chun-ming, president of the Society of Hospital Pharmacists, said he believed there were no safety issues with the current stock of vaccines in Hong Kong.

“It is difficult for bacteria to grow in the environment of minus 70 degrees Celsius, as well as under the temperature of 2 to 8 degrees,” he said. 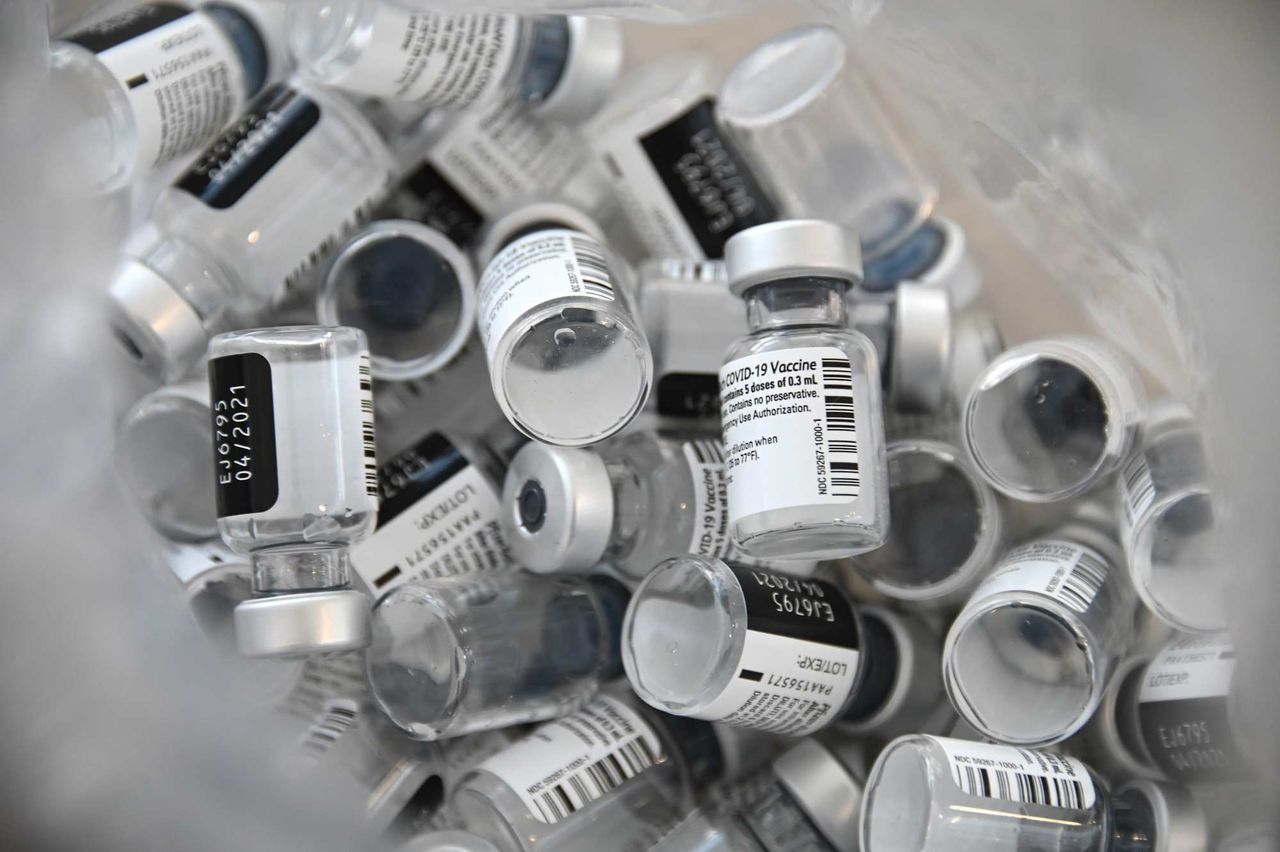 William Chui, president of the Society of Hospital Pharmacists, believed there were no safety issues with the current stock of BioNTech vaccines in Hong Kong.

While air could get into the vial under the ultra-low temperature, Chui said it could be just carbon dioxide, which was solidified into dry ice to keep the vaccines during transportation, and such gas would not affect the quality of the product.

While the packaging defect was not seen in another manufacturing facility managed by Baxter, Chui said the issue of varying quality among manufacturing plants for the same product was quite common.

“The production line usually won’t involve one place only,” he said. “If there were issues with a manufacturing plant, it could be suspended immediately and be placed with another production line.”

Compared to BioNTech, Baxter had a much longer history and experience in producing pharmaceutical products involving vials packaging, Chui said.

Chui also raised concerns that the German manufacturing facility in question could have supplied vaccine batches to other places too, and urged health care professionals overseas to take note of any packaging defects.

Secretary for Food and Health Professor Sophia Chan Siu-chee emphasised that the two approved vaccines available in Hong Kong, namely the Sinovac and BioNTech versions, were safe and efficient to use.

Chan also stressed that the city’s health authorities had implemented a robust mechanism to identify and respond to issues regarding the vaccines, including investigations on adverse effects to the jabs and liaising with manufacturers on packaging problems.

Just 6.2 per cent of Hong Kong’s 7.5 million population, or 466,300 people, have received their first dose of vaccine. Around 315,000 took the mainland China-produced Sinovac version, while about 151,300 chose the BioNTech jab.

About 0.7 per cent of the population, or 54,000 people, have already received their second dose of the Sinovac vaccine and are now fully vaccinated.