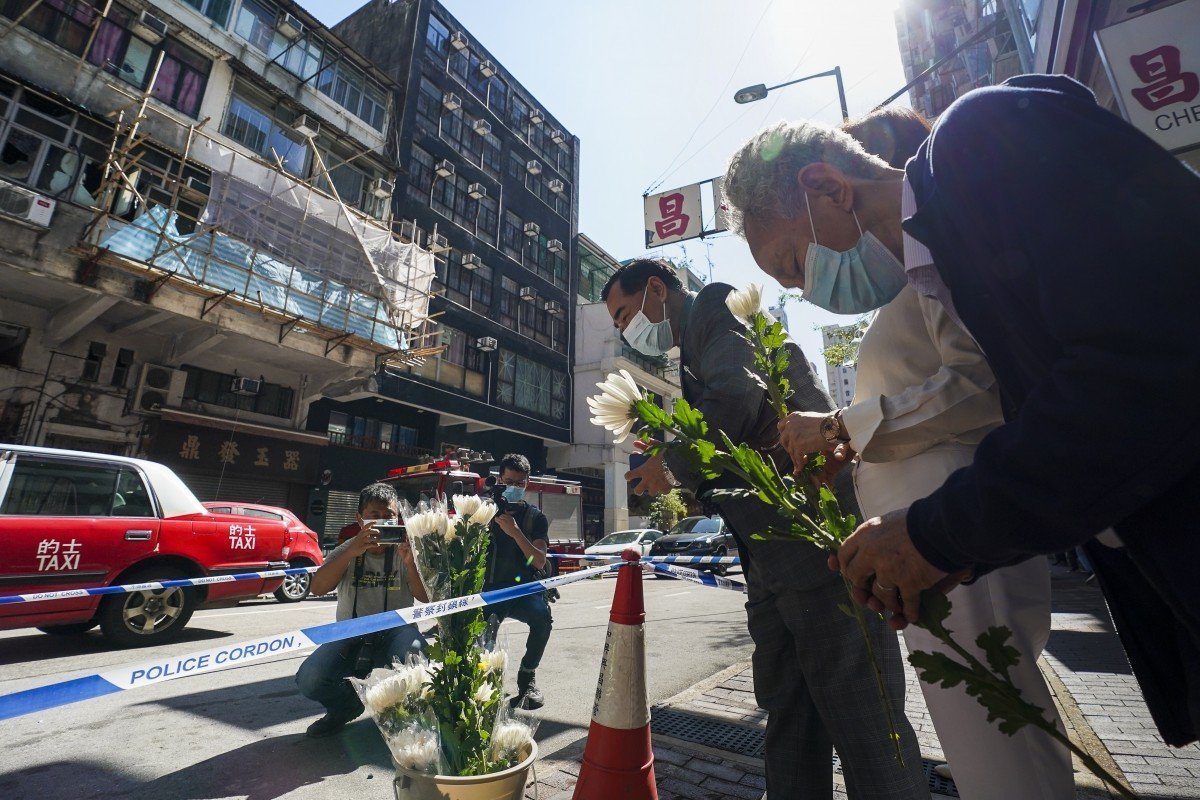 The unlicensed restaurant at the centre of Hong Kong’s worst fire tragedy in nearly a decade is likely to be just one of many similar city establishments frequented by members of ethnic minorities due to a lack of proper facilities where they can gather, concerned residents have said.

Observers said Sunday’s deadly inferno at the Nepalese diner in Yau Ma Tei – which killed seven people and injured 11 others – exposed how these groups had been marginalised in society.

The fatal blaze at the private venue known as “Jeere Khursani” on Canton Road has also shone a light on the lack of proper fire suppression systems in old buildings across Hong Kong, prompting calls for authorities to scale up inspections.

Of those killed or injured, 17 were Nepali while one person’s nationality was not known. Seven of those in hospital had life-threatening injuries, as of Monday night.

“Hong Kong is an international city, but with festivities and gatherings, whereas the rich elite book hotels and fancy restaurants, low-income families have to do it in parks and places like that,” said Andrews, who is helping families affected by the blaze.

He said some of the flats in the city’s tenement buildings were subdivided into 16 units, adding: “Of course they are fire hazards … there’s no monitoring.”

Dambar Krishna Shrestha, who is from Nepal and knew of many compatriots visiting the premises over the weekend before disaster struck, said: “There are at least five to 10 clubhouses in the area. Unlike a restaurant, there was no emergency exit. Many people escaped from a window.”

Shrestha, who has lived in Hong Kong for four years and is now editor of the Everest Khabar magazine, said some low-income Nepalis went to unlicensed restaurants because mainstream ones were too expensive. 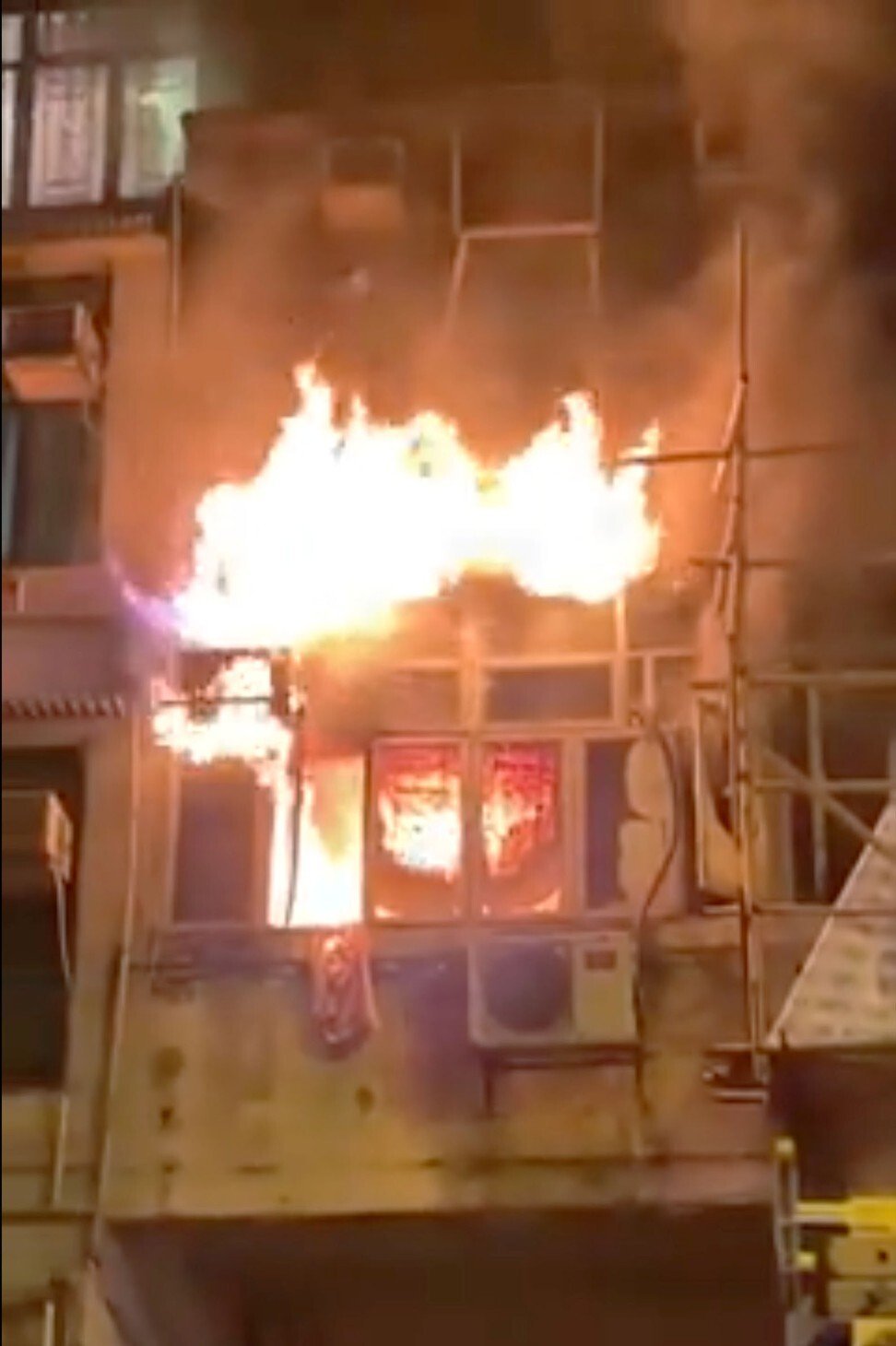 The fire ripped through the residential building on Canton Road soon after 8.30pm on Sunday

The fire broke out at 8.35pm on Sunday in the 800 sq ft flat, which sits on the first floor of a 69-year-old building and had been converted into a Nepalese kitchen-style diner.

Firefighters had the blaze under control within about half an hour, but it was not fully extinguished until 10.41pm. A man was seen climbing out of one of the flats.

Those at the venue were celebrating a birthday and Diwali, the Hindu festival of lights, a police source said. The Fire Services Department added the building was not equipped with any fire suppression systems, such as sprinklers.

The Food and Environmental Hygiene Department confirmed on Monday that the operator of the affected premises did not have a restaurant licence.

The department received a complaint in April last year alleging that an illegal restaurant operation was being run on the premises. But at that time the accusations were not substantiated by officers visiting the site.

The Home Affairs Department also confirmed it had never received an application from the operator for a club licence.

A shopkeeper working nearby said he knew of at least one more unlicensed clubhouse that ethnic minority members often visited, as he urged the government to step up inspections of such sites.

The ethnic minority population in Hong Kong has increased by about 70 per cent over the past decade to about 263,000 today, not including foreign domestic workers. About 80,000 of them are South Asians, including Indians, Pakistanis and Nepalis. 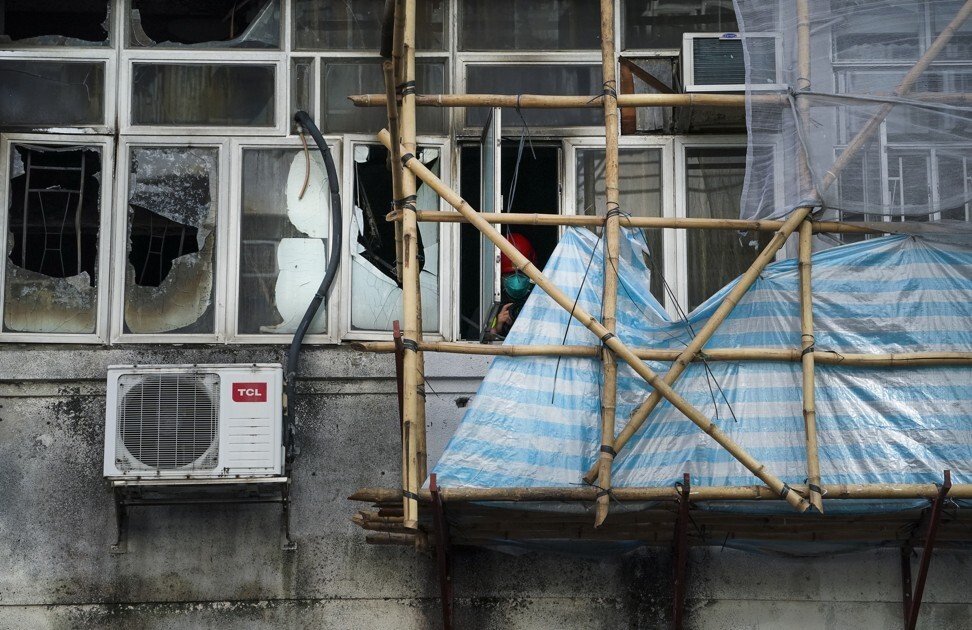 The scene of Sunday’s devastation.

Puja Kapai, a University of Hong Kong associate law professor who has carried out studies on ethnic minorities, said the Nepali and Pakistani groups tended to live in poverty, facing various forms of marginalisation and exclusion from society.

“Generally that means their access to a range of venues or opportunities is limited, and to some extent, maybe that plays some part in how the families [involved in the fire] found themselves in such circumstances,” said Kapai, who lives in a Jordan tenement.

Chief Executive Carrie Lam Cheng Yuet-ngor’s office on Monday said that the Fire Services Department and the Buildings Department would carry out inspections of 2,500 residential buildings, as well as those with mixed residential and commercial functions. The structures to be inspected are all at least 60 years old.

All of the inspections are expected to be completed by the end of this year. Firefighters will also contact ethnic minority groups to educate them on fire safety.

In Hong Kong, about 13,500 buildings were built before March 1987. Under the Fire Safety Ordinance, which came into force in 2007, heightened fire safety measures were required at those blocks.

Up to last November, authorities had inspected 93,000 such buildings, issuing 7,800 orders for premises to upgrade their fire safety equipment. However, compliance was only at about 7 per cent.

On Monday night, the Buildings Department said inspections carried out after Sunday’s blaze showed the fire doors on the first three floors of the building had been removed, with statutory orders issued to the property owners concerned.

The department also said property owners in the building were ordered in September 2018 to address issues relating to the building and windows, but those instructions had not been followed.

Hong Kong has seen a number of deadly blazes over the years. In 2016, the Fire Services Department stepped up inspections of mini-storage outlets after an inferno at Ngau Tau Kok facility killed two firefighters.

Sunday’s fire was the deadliest since 2011, when nine people were killed and 34 injured in a fire that ripped through Fa Yuen Street in Mong Kok.

Many old buildings in Yau Tsim Mong did not have proper fire suppression systems because of landlord neglect, he added.

Seventeen opposition district councillors there will hold an emergency meeting next week to discuss how to step up fire prevention. 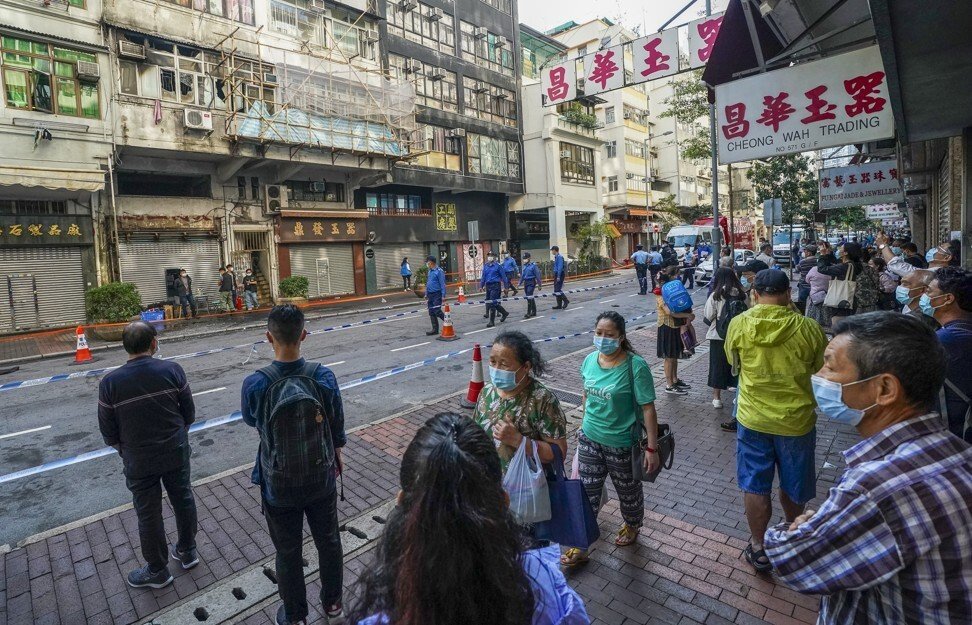 Police and the fire department are investigating Sunday’s fire, which has killed seven and left the same number in a life-threatening condition in hospital.

Miki Chan, a 40-year-old housewife who lives nearby, said many of the buildings in the area lacked proper fire suppression systems and that the stairs were often blocked.

“Many people would put their shoe racks outside their flats because the homes are just so small,” she said. “I have never seen fire extinguishers in the buildings in the area.”

Judy Gurung, who is Nepali and a community coordinator of ethnic affairs for the Democratic Party, offered her flat to residents from the affected building.

Among those waiting for news of their loved ones was a woman who lost her husband, brother, and son in the blaze, according to Gurung, who was at Queen Elizabeth Hospital in Yau Ma Tei on Sunday night.

“She kept asking: ‘Where is my husband?’ We helped counsel her, and a social worker was at the scene as well,” Gurung said.