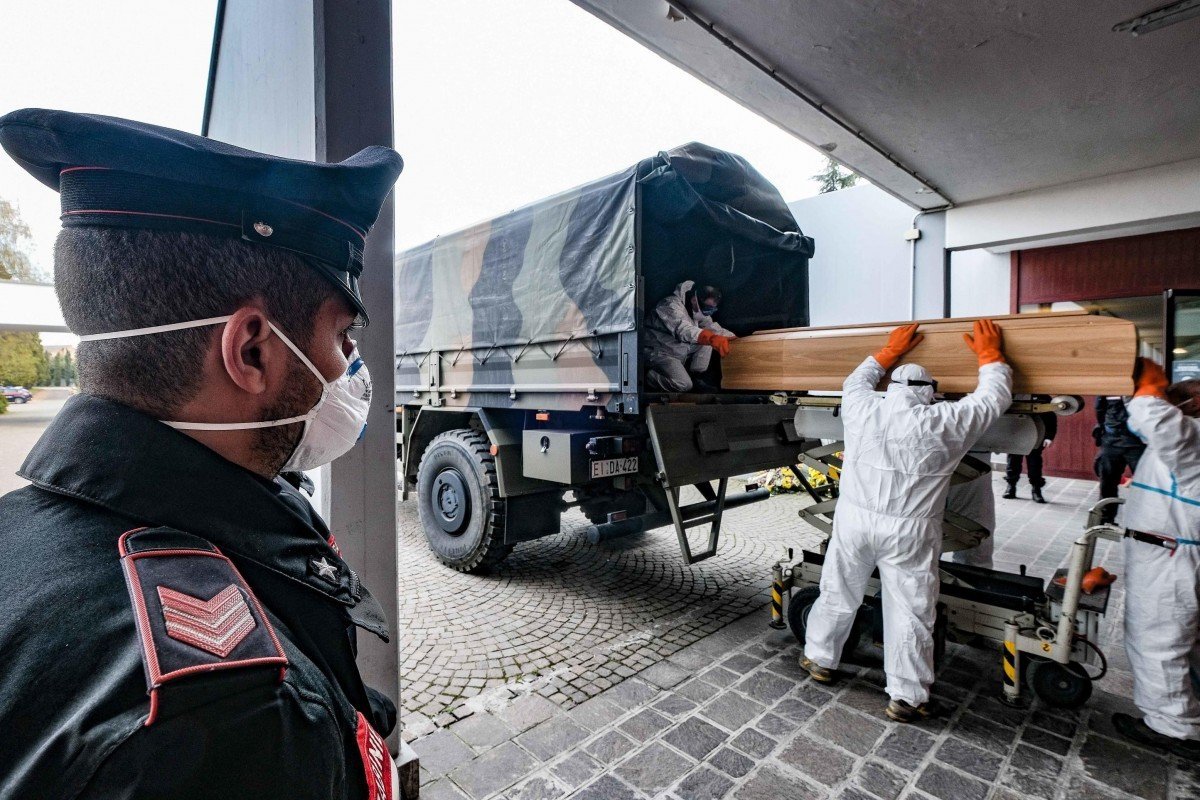 Coronavirus: deadliest day in Italy and Spain shows worst not over yet

Italy and Spain suffered their deadliest days from the coronavirus outbreak on Friday, with the government in Madrid warning citizens that the situation will get worse.

Italy reported 969 deaths in 24 hours while Spain reported 769, bringing total fatalities to 9,134 and 4,858, respectively.
Italy now has 86,498 total cases, trailing the US, but overtaking China, where the disease’s first outbreak occurred. New infections in Italy slowed to 5,959, compared with 6,153 the previous day, civil protection authorities said at their daily news conference in Rome.

Spanish Prime Minister Pedro Sanchez convened an emergency cabinet meeting to try to chart a way out of the crisis rapidly engulfing the nation. Both countries are in almost complete lockdown, with their governments counting on limited social interactions to help contain the spread of the disease.

“We may be entering a phase of stabilisation, but we haven’t reached the peak yet,” Health Minister Salvador Illa said at a news conference in Madrid.

With Italy and Spain now reporting the most deaths worldwide, Europe’s outbreak is stretching health care systems and in some cases forcing doctors to choose who should live or die.

The head of the World Health Organisation tried to rally support for the battle against the disease on Friday, even as some world leaders like US President Donald Trump question the need for extreme measures.

British Prime Minister Boris Johnson, who was criticised for being slow to react to the epidemic, became the first world leader to say he has tested positive and is self-isolating in his Downing Street offices with “mild symptoms”. Prince Charles, the heir to the British throne, also has the virus.

European Union leaders have largely recognised the danger but struggled to agree at a virtual summit Thursday on a joint strategy to limit the economic impact. They left key details to be hammered out in the weeks ahead as thousands fall ill and hundreds die each day across the continent.

In the absence of a shared EU response, national governments have been going it alone. In Germany, the upper house of parliament gave the final green light on Friday to a package totalling more than €750 billion (US$826 billion).

The measures include a supplemental budget with new borrowing of €156 billion, as well as loans, guarantees and aid for companies. The government may also buy stakes in and even nationalise certain stricken businesses.

The Spanish government last week announced a stimulus package worth as much as €100 billion (US$110 billion). It includes assistance for small and medium-sized enterprises – which account for the bulk of the nation’s economic activity and have been hammered by a collapse in demand – as well as tax deferments and loan guarantees.

Spain’s economy could shrink as much as 4.5 per cent in 2020 due to the impact of the virus, according to a report published Friday by Banco Bilbao Vizcaya Argentaria.

“An extraordinary crisis like Covid-19 requires the use of all economic policy tools,” the bank said. “In this situation, fiscal-policy makers should do all they can to mitigate the possible permanent consequences.”

In a sign that containment measures may be working, the curve of the contagion’s spread started flattening slightly on March 20, according to Silvio Brusaferro, the head of the country’s public health institute.

Lombardy Governor Attilio Fontana, who heads the region with the worst outbreak, said before Friday’s death toll was released that a decline in cases may come in days.

Even as the spread seems to be slowing, evidence of its impact on the economy is starting to emerge. Confidence among Italian businesses crashed this month across all sectors. Consumer sentiment also deteriorated.

Italy’s gross domestic product may shrink by 6.5 per cent in 2020, according to research group Prometeia. The government has pledged to launch a second stimulus package worth at least €25 billion in April, after approving a similar amount this month.