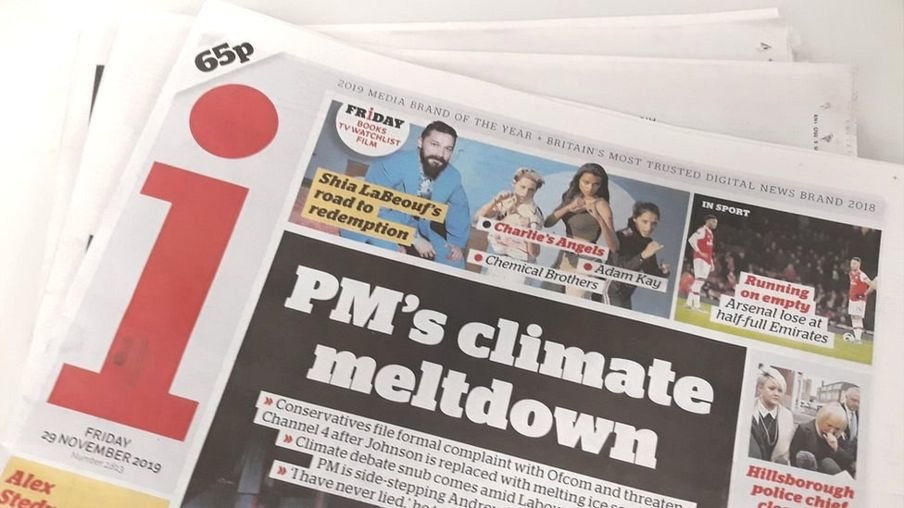 The owner of the Daily Mail, DMGT, has bought the i newspaper and website for £49.6m from JPI Media.

DMGT chairman Lord Rothermere said the paper was "a highly respected publication with a loyal and engaged readership".

"We are committed to preserving its distinctive, high-quality and politically independent editorial style."

The Competition and Markets Authority will have to approve the deal.

The deal means that the paper will have its fourth owner in as many years.

The sale was attacked by Labour leader Jeremy Corbyn, who said in a tweet that two billionaires now owned half the UK's top 10 daily newspapers.

The billionaire owner of the Daily Mail, the Viscount Rothermere, has bought @theipaper.

Two billionaire press barons now own half of the top 10 daily newspapers.

Remember this when they attack Labour's plan to make the super-rich pay their fair share.

The i was launched in 2010 as a sister paper to the Independent. It sells for 65p on weekdays and £1.20 on Saturdays.

When it first hit the newsstands, executives at the company said it was aimed at "time-poor newspaper readers", especially commuters, who lacked the time to read a quality newspaper on a regular basis.

At its launch, it shared the same editorial staff as its sister paper and was seen as a way of extending the Independent's brand to a new market.

But in 2016, the Independent closed its print edition and the i was sold for £24m to Johnston Press.

Despite this, links to the paper's former parent remained, with the i continuing to provide a print home for some of the Independent's now otherwise digital-only content.

In November 2018, the i changed hands again after Johnston Press was bought out of administration by JPI Media.

DMGT had been mulling the purchase for at least a year, but was beaten by JPI Media's deal with administrators.

Johnston Press was one of the largest local and regional newspaper organisations in the UK with a history dating back more than 250 years, but it had debts of £220m.

The deal leaves JPI with The Scotsman and Yorkshire Post among its biggest titles. In total, it owns about 200 newspaper brands.

And the Financial Times is owned by Japanese media firm Nikkei, after being sold by UK publishing group Pearson in 2015.
Add Comment