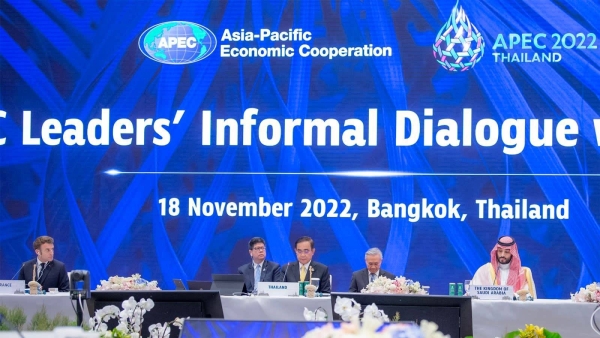 Crown Prince and Prime Minister Mohammed bin Salman has attended the Asia-Pacific Economic Cooperation (APEC) summit in Bangkok, leading Saudi Arabia's delegation at the annual gathering of the 21-member bloc.
The Crown Prince arrived on Thursday in Thailand on an official visit upon invitation of Thai Prime Minister Prayut Chan-o-cha.

Upon his arrival at the venue of the summit, Prince Mohammed was welcomed by Thai Prime Minister Prayut Chan-o-cha.

Later, the Crown Prince held talks with several world leaders attending the summit, on the sidelines of the APEC summit.