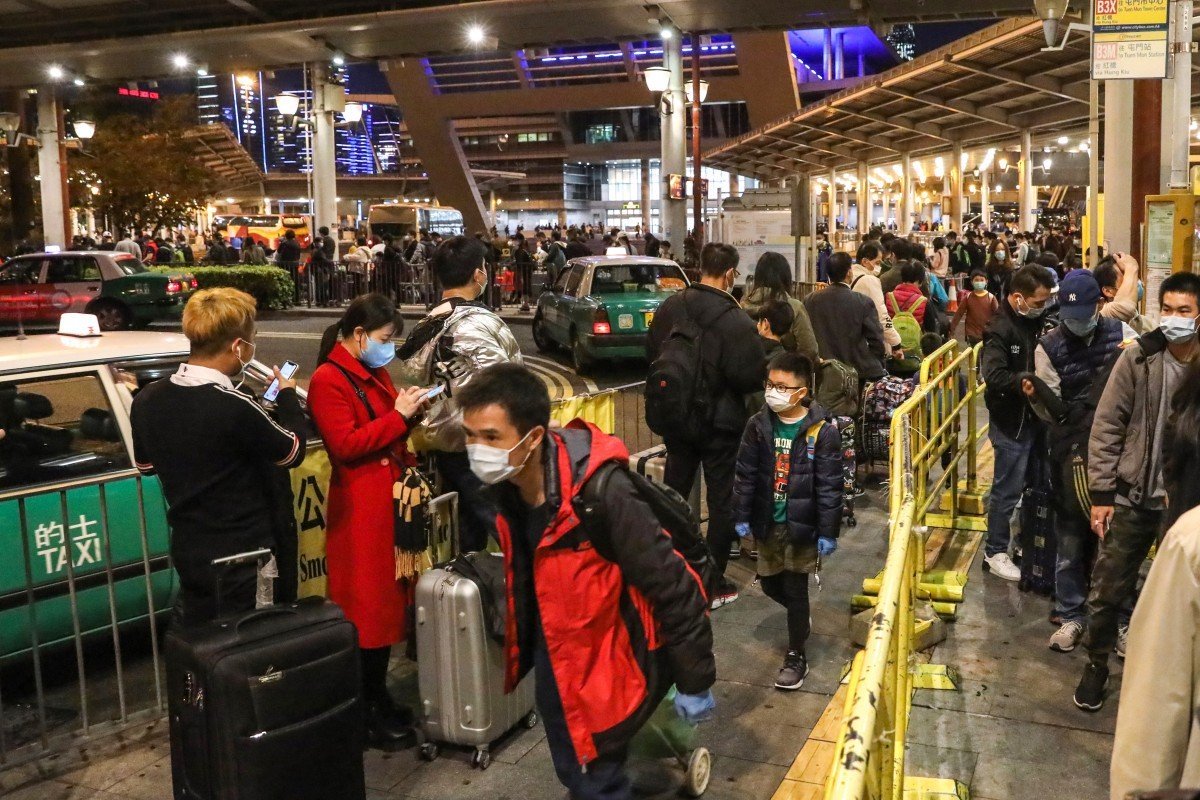 Long lines at transport interchange of port in neighbouring Shenzhen. From Saturday, anyone entering Hong Kong from the mainland will be quarantined for 14 days

Tens of thousands of cross-border travellers packed one of two land ports still in use on Friday before a mandatory 14-day quarantine requirement for all mainland visitors to Hong Kong came in at midnight, aimed at curbing the spread of the deadly coronavirus.

At 7pm, long queues snaked back from the transport interchange of Shenzhen Bay Port as mainlanders and city residents waited to enter Hong Kong before the weekend.


Hundreds of mainlanders who had made it into the city were seen queuing for tour coaches at the port, the line stretching back more than 100 metres. Police had stepped up security, with more officers on patrol.

Individual visitors were still seen entering Hong Kong via the crossing before the clock struck twelve. The last visitor, a mainlander, walked out of the border control point at 12.07am on Saturday. She said she was not asked to go into a two-week quarantine.

The new rule, announced by Chief Executive Carrie Lam Cheng Yuet-ngor on Wednesday, was part of the government’s stepped-up tactics to contain the coronavirus, which has infected more than 31,000 and killed more than 630 on the mainland. By Friday night, 26 people had been infected in Hong Kong, one of them fatally.

Under the new measure, anyone entering Hong Kong from mainland China will go into mandatory quarantine for 14 days, either at their residence or booked accommodation. Anyone who violates the rule could face a HK$25,000 (US$3,220) fine and six months in jail.

Hongkonger Lam Ho, 29, was going in the other direction. The office clerk was taking the bus to the Shenzhen Bay crossing from the northwestern town of Yuen Long before starting unpaid leave at his Shenzhen home because crossing the border regularly was about to become impractical.

Working at a warehouse company in Yuen Long, Lam generally commutes via the Lok Ma Chau border point from his home in Shenzhen’s Huanggang district, where he lives with his mainlander girlfriend. After the government announced the new quarantine measures, his supervisor told him to take the time off unpaid.

“I’m just a nobody. My supervisor informed me about his decision and there’s nothing I could have done otherwise,” he said.

He described the mandatory quarantine move as “an understandable decision, but an overreaction”, adding that Hong Kong would still risk importing the virus from the mainland via cargo entering the city.

“Hong Kong’s situation is not so serious. Closing the border at this stage is too early, but it’ll have a huge impact on many people,” he said. “The government should either implement the measure at a later time or grant exemptions.”

Alex Wu, a 28-year-old Hongkonger who commutes between the two cities weekly to meet clients of his computer company in Shenzhen, agreed that commuters should be exempt from the requirements.

He planned to avoid crossing the border while the rules are in place, and said the measures would affect his company’s sales.
He said the government “may provide exceptions for cross-border travellers if they could prove they need [to commute between the cities]”.

He added that officials should tighten surveillance on travellers’ health conditions at the border.

Hong Kong housewife Wendy Chan, 27, had her trip to Fujian province during the Lunar New Year holiday cut short because of the quarantine arrangement.

She said the new rule was “very troublesome” and would disrupt her weekend plans in Shenzhen, where she generally goes to shop and see films.

Property businessman Wu Dong, 57, used to commute from his home in Shenzhen to work in Hong Kong. He was forced to move back to the city with his family, realising the new measures might prevent his three sons from attending school in Hong Kong.

Wu said the quarantine rule was inconvenient but necessary to protect the interests of the larger community.

“You need to be responsible,” he said. “The government did this for the greater good.”

Shenzhen Bay Port was one of the two functioning land crossings left after Lam announced on Monday that four more would shut, adding to a list of six crossings closed earlier. The other checkpoint still in operation was the Hong Kong-Zhuhai-Macau Bridge.

The Immigration Department reported that some 11,000 mainland visitors entered Hong Kong on Thursday, up from 8,760 the day before.

At Shenzhen Bay Port, overall usage increased 93 per cent from Wednesday to Thursday.

The number of Hong Kong residents arriving at the crossing more than doubled from 16,387 on Wednesday to 38,920 on Thursday, while the number of mainland visitors entering the city via the port also increased, from 2,378 to 4,813.