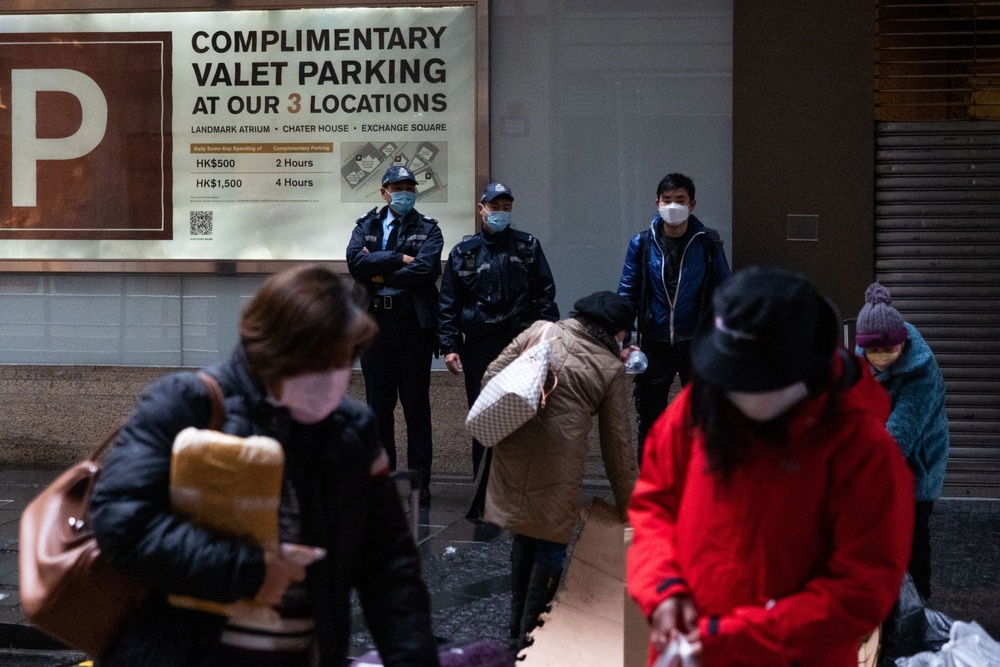 Hong Kong’s latest Covid containment campaign is taking its greatest toll on the hundreds of thousands of migrant women who work as live-in domestic workers in the city.
Scores have been evicted or sacked after testing positive for Covid, by employers who don’t want the virus in their households, according to local rights groups. And some are facing steep fines for violating the two-person limit ongatherings -- a rule that’s upended the longstanding tradition of domestic workers meeting up with friends on their single day off.

Last weekend, foreign domestic workers, known locally as “helpers,” accounted for more than one of every four people fined for breaching the city’s Covid protocols, even though they account for less than 5 percent of the population. The fines can be as much as HK$10,000 (US$1,281) -- twice the minimum monthly wage for live-in domestic workers.

One 57-year-old Filipina woman said she was fined HK$5,000 after lowering her mask for “five seconds” to take a phone call.

“My friend’s employer got out a taxi and the police saw her mask on her chin, but no penalty,” the worker said. She asked to remain anonymous because she was afraid to get in trouble with the police. “For me, it is discrimination because we are domestic helpers.”

A police spokesperson said: “Police will act on the basis of any actual circumstances in accordance with the law.”

Helpers work in roughly 10 percent of Hong Kong households. Mostly Filipino and Indonesian, this 340,000-member workforce is an often-overlooked but critical part of Hong Kong’s US$345 billion economy, providing live-in childcare, cooking, and cleaning services for as little as HK$4,630 a month.

But they never enjoy the rights or privileges of other long-time foreign workers in the city. Unlike professional expats, helpers are never eligible for “permanent resident” status. They’re dependent on their employers not only for shelter and wages but for their visa; if they lose their job, they have two weeks to find another before they must leave.

“It’s very unfortunate that the government hasn’t really commented or given guidelines on how migrant workers should be treated during this Covid crisis,” said Tong. “That’s left to the employers to decide.”

Reports of families being separated by Hong Kong’s strict policies on Covid isolation and hospitalization have made households especially cautious, and at the same time, facilities are overrun, so authorities are telling people with mild infections to quarantine at home.

One 31-year-old helper said her employer refused to let her quarantine at home, saying she could only return after posting three negative tests. Without food or warm clothes, she spent a 10-degree night camped outside a hospital before being moved to a shelter.

According to Hong Kong law, firing a helper for being sick could lead to prosecution and a fine up to HK$100,000.

Manisha Wijesinghe, the executive director of HELP for Domestic Workers, said her organization raised more than HK$1.2 million in a week to support Covid-positive helpers who had been evicted by employers, as well as to fly workers to their home countries and help others access mental-health counseling.

“There is definitely an element of human rights issues, but this is not isolated to Covid-19,” Wijesinghe said. “Covid-19 has really thrust these issues into the spotlight.”

But the government has expressed alarm over helpers’ regular Sunday gatherings, when they hang out in parks and on sidewalks to spend their days off with friends. “Ask your helpers to stay home,” Hong Kong Chief Executive Carrie Lam said in a Feb. 18 news conference. “We will not show mercy anymore.”

That extended to a crowd-funding effort that sprung up to assist helpers facing steep fines. A campaign had raised US$107,000 before government officials suggested the effort broke the law.

“You may have good intentions, but we can’t rule out that you are maliciously obstructing our whole anti-epidemic effort,” Secretary for Labor and Welfare Law Chi-kwong told Commercial Radio on Saturday. “You are helping a big group of foreign domestic workers to congregate.”

For the 57-year-old woman who was fined for lowering her mask, it’s the legal requirement to live with employers that made her vulnerable to the harsh anti-pandemic penalties.

“We are in our employer’s house for six days a week,” she said. “Then, as soon as the police can see us chatting with each other, they hand out a fine.”
#COVID-19  #Covid
Add Comment