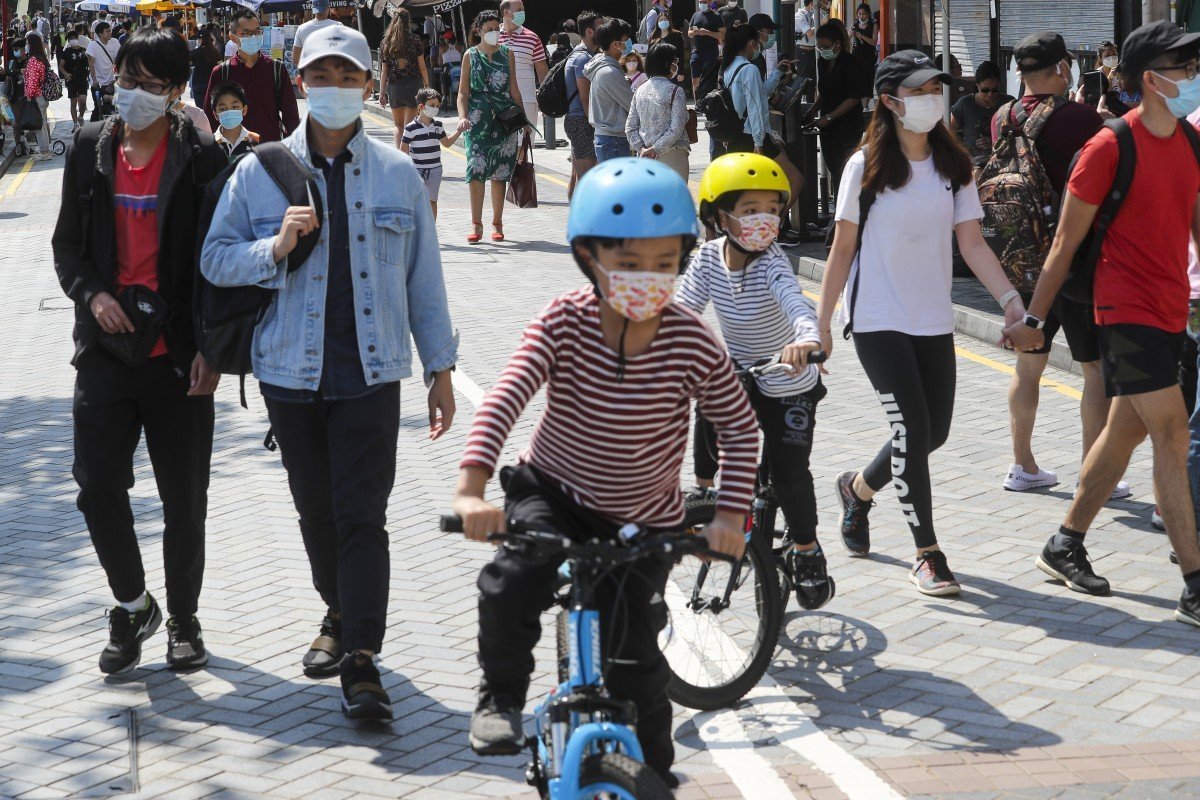 Work-from-home arrangements for civil servants expected to remain in place for another week, as will ban on entertainment and social venues opening. Latest case involves a 19-year-old female student who studies in Britain and returned to Hong Kong on April 1

Hong Kong reported one new coronavirus case on Thursday, the fifth straight day with a single-digit increase in Covid-19 infections and the lowest figure in more than five weeks, bringing the city’s tally to 1,017.

But according to government sources, officials planned to keep prevention measures as they were for now, with work-from-home arrangements for civil servants expected to remain in place for another week, as would the ban on entertainment and social venues opening.

At Thursday’s regular press conference on the Covid-19 situation in Hong Kong, Dr Chuang Shuk-kwan, head of the communicable disease branch of the Centre for Health Protection, attributed the single-digit increase in cases in recent days partly to the success of recent social restrictions imposed by the government and on immigration measures and quarantine requirements for arrivals.

But she also urged people not to let their guard down, stressing the need to watch for a possible resurgence of infections as many people had been out over the Easter holiday.

Chuang would not be drawn into whether the recent figures signalled it was time to ease some social restrictions.

Since all travellers were now tested for the virus and arrivals from the US, Britain and Europe, the worst-hit regions, were asked to remain at the test centre until they were cleared, Chuang said the move would help eliminate those who fell through the cracks, like the latest confirmed patient.

The new case involved a 19-year-old female student who attends school in Britain. She returned to Hong Kong on April 1, when mandatory testing had not yet been implemented. She had not been tested until her diagnosis.

Chuang said the student stayed at the Metropark Hotel in Mong Kok during her two-week quarantine period, feeling largely fine except for an itchy throat. But she developed a fever on Wednesday, after she had returned home. She was admitted to Caritas Medical Centre.

“I think from the public health point of view, because this disease has asymptomatic transmission and also mild cases can transmit the disease, we have to maintain social distance. Otherwise it’s very easy to get clusters or outbreaks if anyone is asymptomatic,” she said.

“As for the relaxation [of social measures] … I think this consideration is not only based on the public health point of view. There are other factors the government needs to consider.”

She said Covid-19 was unlike contagions such as dengue fever and measles, which could be eradicated almost completely. And although the number of cases in Hong Kong had dwindled, the pandemic continued to rage overseas, she added.

“What we can do is hold our door and control cases entering through it, so as to avoid an outbreak in the community,” said Chuang, urging the public to remain vigilant and consult a doctor when they felt unwell.

Thursday saw the smallest rise in cases since March 9 when there was also only one confirmed case reported. On Wednesday, four cases, all imported, were confirmed.

Meanwhile, a government steering committee on Covid-19 said all current work arrangements should continue at least for the next week, according to a source, who added, however, that all bureaus had been asked to consider an exit plan, including on work arrangements.

“The government sees no need at this stage to make a high-profile announcement that civil servants’ work-from-home arrangement will be scrapped as the coronavirus outbreak has not yet been fully contained,” another government source said.

“This would also be inconsistent with the government’s measures to promote social distancing.

“The government’s current position is that civil servants are providing essential services. The fact is the number of civil servants currently working in offices is much higher than when the special arrangement was first introduced in late January.”

Government employees were originally advised to stay away from the office between January 29 and February 2, but the date was later pushed back to March 2.

The government announced on March 21 that civil servants’ work-from-home arrangement would be restored and no deadline to end it was set.

Similar measures have been adopted in the private sector, where many workers have been told to stay home.

A third source said the government was in no hurry to decide whether the ban on public gatherings of more than four people would be further extended when it expired on April 23.

Meanwhile, Chuang said that for a previous case in which a patient tested positive after suffering blood in her stool upon returning from Morocco last week via Guangzhou, subsequent investigations found the symptom was unrelated to Covid-19.

A total of 528 patients were still receiving treatment in 14 public hospitals. Nine were in critical condition, nine were listed as serious, while the rest were stable, according to the Hospital Authority. Twenty-six have been discharged since Wednesday.

First detected in Wuhan city in central China, Covid-19 has infected more than 2.08 million people worldwide, killing over 138,000, according to the latest data compiled by Johns Hopkins University.

Hong Kong reported its first case on January 22 and has so far recorded four deaths from the dreaded disease.