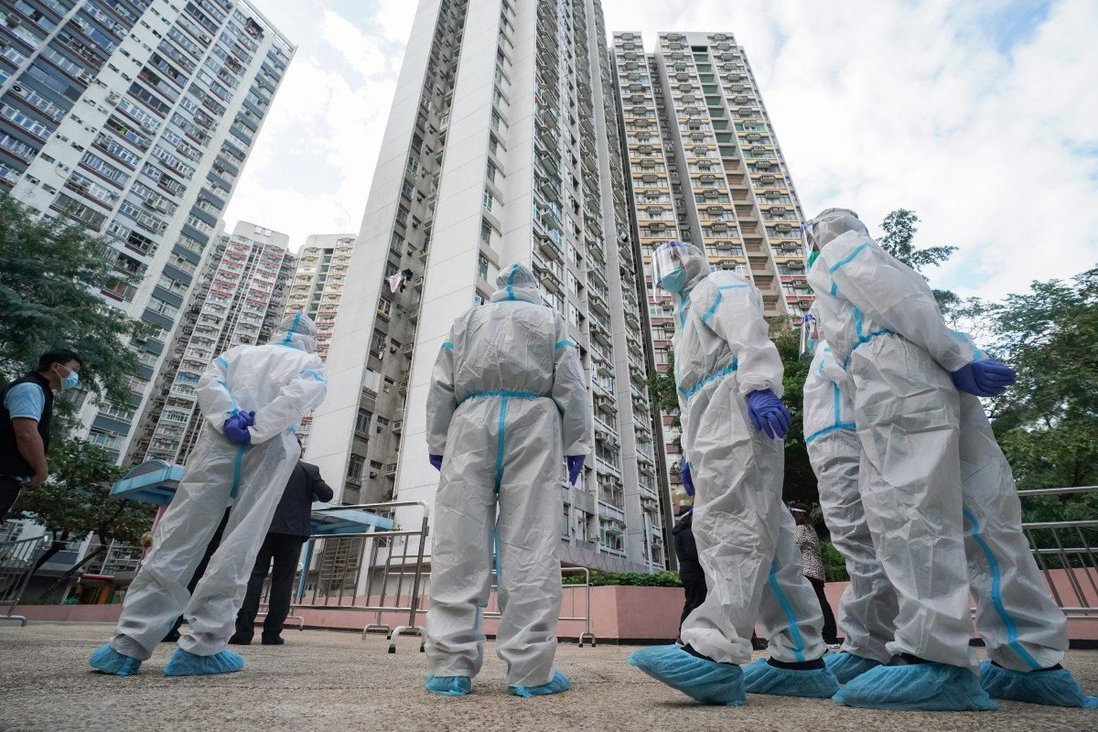 The latest fatalities followed the three deaths reported on Monday, taking the toll this week to six and 123 in total.

Fears that clusters of Covid-19 could be spreading across Hong Kong are mounting after an outbreak at a domestic helpers’ boarding house, while mandatory testing was ordered at two housing blocks as 98 new infections and three more deaths were reported on Tuesday.

The latest fatalities came after three deaths were also reported on Monday, taking the toll this week to six, and to 123 in total since the pandemic began. The highest number of deaths in a single day was five, recorded on August 1.

Among the latest infections, 30 were untraceable and nine imported. The city’s overall tally now stands at 7,721. The number of untraceable infections dipped from Sunday, when 41 such cases were reported, the most in a single day since the fourth wave began.

A cluster involving a Tai Po boarding house, where a number of domestic helpers lived and visited, grew from two to 12 patients, including employers, bringing worrying comparisons with the city’s third wave, when some dormitories or temporary accommodation for job-seeking maids became virus hotspots.

Six of the new patients in the cluster were helpers, while the others were members of a family that employed a maid confirmed as infected on Monday. The youngest family member is just six months old.

“We are worried the outbreak of … the boarding house in Tai Po may affect more families throughout the city. That’s why we are issuing [a] compulsory testing notice,” said Dr Chuang Shuk-kwan, head of the Centre for Health Protection’s communicable disease branch.

“Each domestic helper may be linked to a family with elderly people and babies … if people don’t observe the order, we will take legal action.”

The mandatory screening applies to anyone who had been to flat 1C of Fung Lin House in Tai Po for two hours or more, on or after November 15.

Thirty-three people, including helpers and their employers, were identified as close contacts and would be sent to quarantine, but Chuang admitted it was difficult to trace everyone, as some only visited the boarding house for a short while during weekends, and others brought friends there.

Some helpers stayed in separate rooms in the flat and did not know each other, but a possible route of transmission was thought to be common facilities such as the toilet.

Chuang urged employers to remind their helpers to get tested if they had been to the location, adding that authorities had asked the relevant consulates for help in getting the message out.

Two more mandatory testing orders were also issued for anyone who had been to Po Tat Estate’s Tat Yi House in Kwun Tong or Choi Wan Estate’s Ming Lai House in Wong Tai Sin on or after November 20, following the expansion of the clusters.

One preliminary-positive case was detected in the Kwun Tong block, which now has seven infections in four flats. That patient is a family member of a newly confirmed case in the Wong Tai Sin building, which now has six patients across four flats.

The two buildings became the fourth and fifth virus-hit residential blocks in a public estate to be issued with such an order, after Kwai Shing West Estate, Richland Gardens and Tung Tau Estate.

Meanwhile, a cluster of seven infections at the airport police station has resulted in around 100 officers being quarantined. A police dog from the station also tested positive on Tuesday and was quarantined by the Agriculture, Fisheries and Conservation Department.

Covid-19 surfaced in packed helper dormitories at the peak of the third wave in August, when more than a dozen maids were infected. Cramped and overcrowded conditions and poor hygiene in such facilities, usually run by helper employment agencies, were blamed for the virus spreading.

The government responded by offering free testing for maids whose contracts had ended and were looking for new jobs, a group with greater need for such accommodation, but the latest infections renewed concerns.

Professor Gabriel Leung, dean of the University of Hong Kong’s faculty of medicine who advises the government on pandemic strategies, said the rise in maid infections was a “very big alarm bell”.

“Many domestic helpers have to take care of the elderly and kids in their employer’s home, and Covid-19 poses a high risk to the elderly, so something needs to be done urgently.”

“These agencies that run the boarding houses really need to realise that if there’s one case, then it can spread to many, and long term it can hurt the industry,” said Mike Cheung, head of Overseas Employment Center Limited.

“There are more masks and surface-level measures being implemented, but as far as any fundamental changes, I think there aren’t any.”