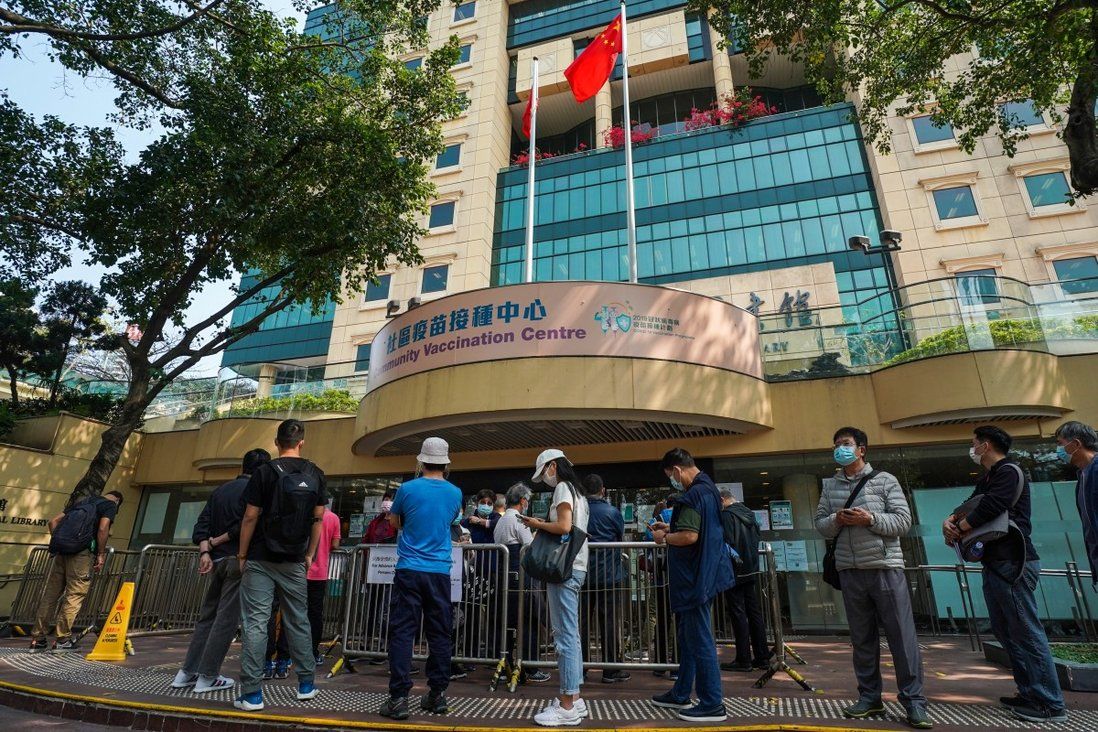 With public concerns over safety of Sinovac jabs mounting, experts say questions remain over whether enough Hong Kong residents will get inoculated.

Hong Kong medical experts have said they believe incentivising people to be vaccinated against Covid-19 could boost the city’s faltering inoculation rate, but questions remain as to whether enough people will be convinced to get the jab.

Chief Executive Carrie Lam Cheng Yuet-ngor on Wednesday said the government was considering moves to increase vaccinations, such as exempting those who take the jab from certain travel restrictions and social-distancing rules.

The deaths of seven people in the city soon after receiving the Chinese-made Sinovac vaccine have led to mounting public concern over its potential side effects, despite no link being established between the fatalities and the jabs.

So far, the take-up rate of the two coronavirus vaccines presently available in the city, Sinovac’s version and one made in Germany by BioNTech, show the public heavily in favour of the latter.

About 276,600 people have so far received their first dose since the start of the vaccination programme late last month. The take-up rate of people turning up to their appointments at community vaccination centres for the Sinovac vaccine was about 80 per cent, while BioNTech shots were around 90 per cent.

Late on Wednesday, three of the 19 community vaccination centres offering the German vaccine, and half of the 18 general outpatient clinics providing the Chinese jab were fully booked for the next three weeks.

“I didn’t book Sinovac because it seems that people who have received the shots have run into some health problems,” Chiu, a housewife in her 30s, said. “I booked the BioNTech vaccine. This is to protect myself and my family.”

Daniel Latham, a 28-year-old teacher who had his first BioNTech shot on Tuesday, said he chose the vaccine because people he knew had taken the same jab and he was aware of any potential side effects.

“If getting vaccinated is a condition to relax social-distancing measures and get life back to normal, I’m more than happy to do my part and hope others will as well,” he said. “I think reducing the quarantine period for travellers will get the vaccine enrolment rates increasing rapidly.”

Without naming the alliance, a spokesman from the authority hit back on Wednesday night at “unfounded allegations by some health care workers on the vaccination scheme” and urged the alliance to avoid “misleading the public”.

The alliance, one of the many activist groups formed during the city’s anti-government protests, launched a strike during the early days of the health crisis to press the government to close all borders with mainland China amid the coronavirus pandemic and called for a boycott of the mass testing scheme over concerns about its effectiveness.

On Wednesday, health authorities dismissed concerns over the efficacy of the Sinovac vaccine, following the infection of a 38-year-old police inspector who tested positive for Covid-19 two days after he received the jab.

The officer received his first dose of the shot last Friday, and was confirmed as being infected on Tuesday. His wife and daughters also contracted the disease.

Dr Chuang Shuk-kwan, of the Centre for Health Protection, said officials did not consider it to be a case of infection after vaccination, noting the family had been in contact with someone who already had the virus on March 7.

“We believe they had already been infected when tested on March 14, only two days after the first dose of the vaccine,” she said. “Usually it takes some more time, at least maybe two weeks or so after completion of the vaccine before you can count whether it is ineffective or not.”

“There’s a confidence problem that must be addressed, otherwise there will be loopholes in our safeguard measures if there isn’t broad protection for the whole population against Covid-19 through vaccination,” he said.

The respiratory medicine specialist believed it would be too risky to relax social-distancing restrictions if most elderly and chronically ill people were not inoculated.

“It will still be a problem even if most of the younger population are vaccinated because they can still bring the virus into their care facilities or to their own homes,” he said. “This will result in serious consequences and we could see a repeat of the third wave, when elderly homes were hard-hit and many seniors died.”

Government pandemic adviser Professor David Hui Shu-cheong hoped the potential to travel over the summer would encourage more people to get vaccinated.

“If you don’t get vaccinated, the chance of travelling would be even slimmer,” he said, adding vaccination could be part of any travel bubble plans the city had.

Hong Kong’s vaccination drive was expanded this week to include all residents over 30, along with other priority groups, covering 5.5 million people.

For Professor Benjamin Cowling, head of the University of Hong Kong’s division of epidemiology and biostatistics, a high vaccination rate was the pathway back to a normal life.

“The higher immunity we can get, the safer it’s going to be to open up fully and relax all those public health measures that we’re frustrated with – the social distancing, the contact tracing and the travel quarantine,” he said.

Cowling feared that people not getting vaccinated, despite the government ordering 22.5 million vaccine doses for the city, would mean the social-distancing rules and 21-day quarantine for arrivals from overseas stayed in place for longer.

“By expanding the programme, I guess the government’s hoping that we’ll have a lot more demand, or maybe actually having a lot of demand would also create more demand,” he said.

Responding to claims there was insufficient data for the Sinovac vaccine, a government spokesman said all Covid-19 jabs used in Hong Kong had been authorised for emergency use. More than 40 million doses of the Sinovac vaccine have been administered worldwide.

According to the information Sinovac provided to the city’s Advisory Panel on Covid-19 Vaccines, phase-three clinical trials showed efficacy at 50.65 per cent after 14 days for the 10,000 participants who each received two doses.

The trials were conducted in Brazil, involving some 12,000 health care workers aged over 18, and about 600 people above 60 who were exposed to Covid-19 patients.

The benefits of using Sinovac generally exceeded the risk of not using any vaccines at all for the elderly population, the city’s Department of Health and the chief executive’s expert advisory panel concluded after examining data from the manufacturer.

“Medical professionals should, following the spirit of protecting public health and the principle of adhering to medical evidence, explain to the public the benefits and risks of getting vaccinated. No political considerations should be involved,” the spokesman said.

The spokesman also stressed there had been no evidence indicating a direct causal relationship between receiving the jab and severe adverse events such as death, based on current statistics from clinical trials.