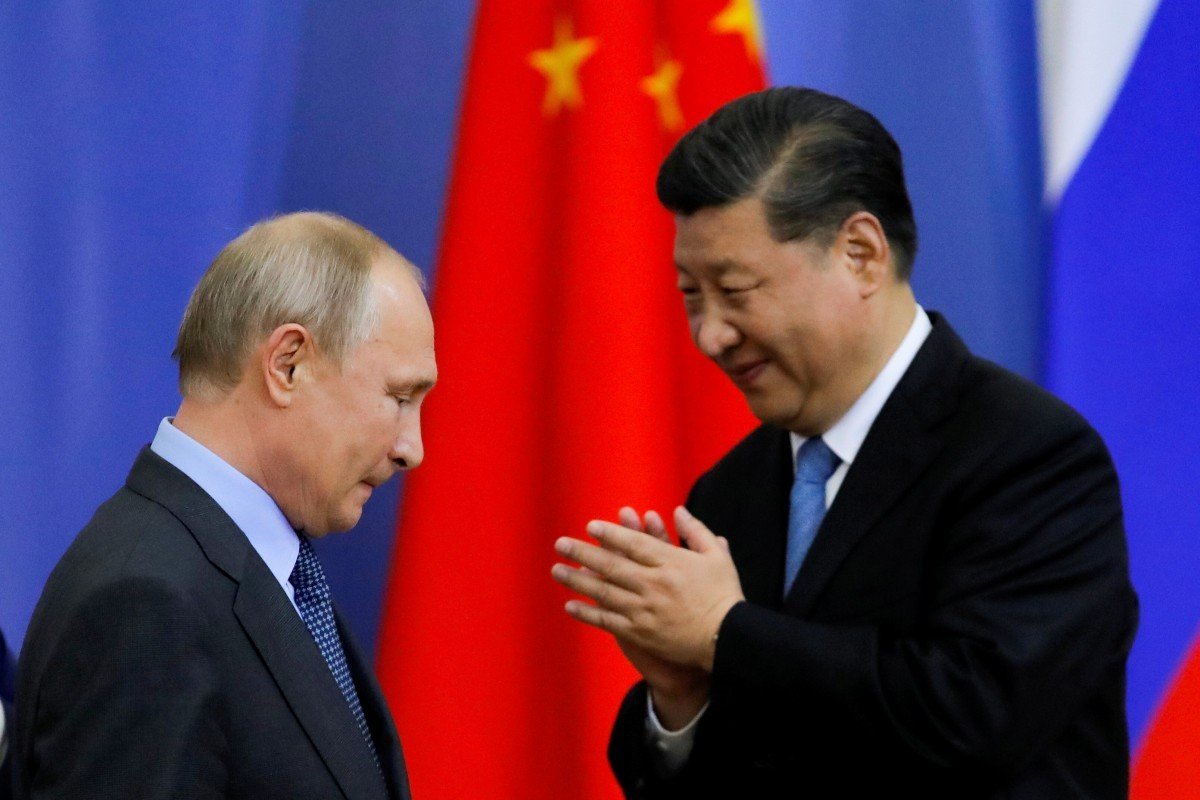 Moscow and Beijing have become increasingly close in recent years, but border closures and imported cases have ‘cast a shadow’ over their relationship. One observer said the two countries have ‘passed this test so far’ but a thaw between the US and Russia may pose a challenge for the future

The relationship between Russia and China has come under scrutiny as the Covid-19 pandemic threatens to put their increasingly close ties under strain.

The two countries have promised to work together to fight the disease and have both denounced American attempts to blame Beijing for the outbreak, but the rise in Russian cases threatens to undermine China’s own efforts to stop it spreading – particularly in the border province of Heilongjiang.

Russia’s economy is also suffering both from the lockdown needed to fight the disease and the global slump in oil prices.
Chinese President Xi Jinping and his Russian counterpart Vladimir Putin have pledged to maintain a united front in fighting the disease, holding three phone conversations since March.

But some observers believe Russia is moving closer to the United States, and note Putin has spoken to Donald Trump six times in the same period.

The two leaders issued a statement on April 26 to commemorate the 75th anniversary of the first meeting between US and Soviet troops during the second world war on the banks of the Elbe.

The statement said that the “Spirit of the Elbe” is an “example of how our countries can put aside differences, build trust, and cooperate in pursuit of a greater cause”.

“As we work today to confront the most important challenges of the 21st century, we pay tribute to the valour and courage of all those who fought together to defeat fascism. Their heroic feat will never be forgotten,” it said.

The Wall Street Journal reported that the statement had raised eyebrows among US officials and politicians because of the political differences between the two nations and in China, some observers took it as a sign of improving relations between US and Russia.

“The statement on April 26 means that Russia and the US can work together,” said Shi Yinhong, an international relations professor at Renmin University. “While the relationship between China and the US is worsening, the personal ties between Putin and Trump endure.”

Covid-19 has infected more than 260,000 people and killed over 2,000 in Russia, but Heilongjiang has reported more than 380 imported cases so far, most of them coming from Russia.

Shi said the pandemic had cast a shadow over relations between China and Russia, partly because of Moscow’s early move to shut border crossings in late January despite Beijing’s opposition.

He also said Russia had mishandled the outbreak inside its own borders. “At the beginning of the outbreak, Russian policy to contain the pandemic was too loose, and now the situation has become very severe. Under such circumstances, Putin seems to have hidden himself. This kind of handling won’t satisfy China … and now their infections soared and this poses a huge risk to China”.

Dmitri Trenin, director of the Carnegie Moscow Centre, a foreign policy think tank, said while the outbreak had put relations between the two countries under strain “so far, both countries have passed this test”.

In a phone call with Xi on April 16, Putin said that Russia opposed any smears against China over its handling of the pandemic, according to the Chinese foreign ministry.

Both nations did not name any third nation in their statement, but it was widely seen as referring to the US which has frequently blamed China for failing to control the disease.

In another telephone conversation on May 8, Xi compared efforts to defeat the coronavirus that causes Covid-19 to the struggle against fascism in the second world war.

China has also sent medical teams and materials to Russia.

Shutdowns imposed to stop the spread of the virus have harmed both countries’ economies, but Russia has been particularly hard hit by the recent slump in oil prices.

Some observers have warned that Russia’s oil exports to China may be affected after a contractor company working for Gazprom, Russia’s major natural gas producer, said it would stop operations at a Siberian gas field that supplies China after a number of workers became infected.

But Alexander Gabuev, senior fellow at the Carnegie Moscow Centre, said the crisis could allow China to expand its influence and its efforts to revive the economy could boost demand for Russian energy.

China's March crude oil imports from top supplier Saudi Arabia reportedly fell 1.6 per cent from a year earlier, while purchases from supplier Russia rose 31 per cent, according to calculations by Reuters.

Earlier this month, Gazprom said it was supplying natural gas to China as planned.

“When it comes to oil and gas, which might perhaps be the most significant items for Russia, China is in an advantageous position to choose whether to reduce the volume it purchases from the Gulf or Latin America,” he said.

“Other countries in the Gulf are the treaty allies of the US, or they have very deep US influence, such as Saudi Arabia.

“If China wants to turn the crisis into an opportunity and cement its grip over some key assets, Russia and central Asia is definitely a natural way to go. And I expect that will be one of the major trends in 2020.”

Gabuev also argued that if Russia wanted to sell more oil to China, Beijing may demand its businesses are given better access to key Russian oilfields.

Li Lifan, a researcher at Shanghai Academy of Social Sciences, said Chinese demand for energy remains high and Russia is still the most stable energy provider.

“Bilateral trade may be affected in the first few quarters because of the pandemic, and allegations [from March] that police in Moscow were violent and detained Chinese nationals for no reason could trigger a backlash on social media, but I think these are small factors that could hamper but hardly derail bilateral relations.”

Li said Russia had been building up its gold and foreign currency reserves to counteract the impact of Western sanctions following the invasion of Crimea and this had left it in a better position to cope with the economic impact of the pandemic.

According to data from its central bank, gold and foreign currency reserves reached US$566 billion as of May 1.

“Russia’s economy is more resilient than many other countries in the world because of its experiences in fighting the sanctions from the West since 2014, and Russia has learnt how to deal with such a crisis,” Li said.