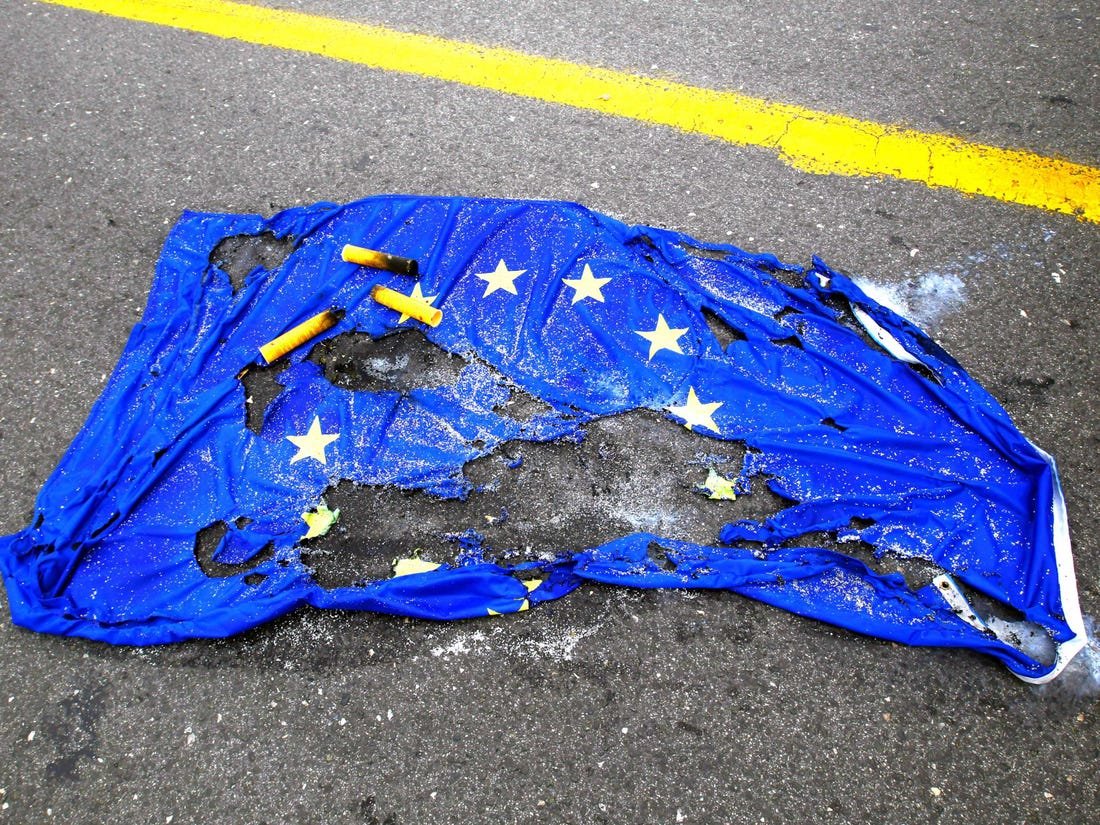 The coronavirus crisis really brings into question what the EU is all about.
Clearly not a United States of Europe, as eurosceptics have often claimed.
Far from it.

Right now, every European government is struggling to protect their populations - their jobs, their health and their economy.

But rich, europhile countries like Germany are not yet digging deeper in to their pockets to help out poorer Italy and Spain.

There's little sense of the responsibility West Germany felt towards the East after the fall of the Berlin Wall.

Why would there be, you might ask. Germany is a sovereign nation, facing its own pretty big problems.

But therein lies the question: What does European Union really mean?

Germany has sent medical masks to Italy. It has taken coronavirus patients from France and Italy into its hospitals for treatment.

But it has also rejected a plea by Italy, Spain, France and others to share out coronavirus-incurred debt in the form of coronabonds (or Eurobonds).

Many Italians feel abandoned, just as they did at the time of the euro and migrant crises.

This week, a group of Italian mayors and other politicians bought a page in Germany's Frankfurter Allgemeine Zeitung newspaper to remind Germany that it was never made to pay back its debts after WW2.

They criticised the public lack of support in the wealthy Netherlands too.

An 81-year-old close family friend in Italy called me this week to say: "Katya, you understand about Europe, don't you? Why don't they want to help us?"

Footage of EU flag-burning is doing the rounds on Italian social media.

On Thursday, he tweeted: "We have to re-examine Europe (the EU) and Italy's role in it. It has not come to our aid at all."
This is not actually the case.

The European Commission has proposed a programme to protect jobs and workers affected by Covid-19 to the tune of €100bn (£85bn; $107bn).

It also announced a €50m aid scheme for Italy to provide medical equipment. The European Central Bank has promised a €750bn stimulus package to help keep the eurozone afloat.

But what of individual EU governments - will they club together to help?

France preaches solidarity. On Thursday, French Economy Minister Bruno Le Maire declared that all of the EU looked to Germany for a solution.

Well, I've spoken to Germans, inside politics and out. To them, that sounds a lot like France telling Germany to pick up the Covid-19 tab for Europe.

Instead, Berlin favours dipping into the European Stability Mechanism - a bailout fund created after the 2008 financial crisis.
But Austria and the Netherlands insist there should be tough conditions attached.

Italy complains that means it would be punished for suffering economically - not as a result of reckless government spending, but because of a deadly virus.

A compromise solution is supposed to be found in time for the meeting of the Eurogroup next Tuesday but right now an acrid whiff of bitterness is in the air between EU brethren.

So, what of the European Commission? Can't it bang heads together; force EU governments to co-operate?
In a word: no.

Commission Chief Ursula von der Leyen keeps repeating that "the only effective solution to the crisis in Europe is one based on co-operation, flexibility and, above all, solidarity".

But EU countries take their own decisions.

The EU's open-border Schengen agreement is temporarily in tatters, with travel restrictions in place between Germany and Austria, Belgium and France, France and Italy and so on.

Finland - which has enforced strict social-distancing regulations - is mulling over whether to fully close its border with Sweden for the first time ever because its border areas have a high incidence of Covid-19.

This would damage Sweden's healthcare system which depends heavily on Finnish medical staff.

And then there's Hungary.

Prime Minister Viktor Orban is famed for favouring what he's described as an illiberal democracy.

This week he got close to getting rid of the "democracy" part altogether after parliament passed a law allowing him to rule indefinitely by decree.

The European Commission's response has been tepid at best. Mrs von der Leyen expressed "concern" and said countries had to ensure coronavirus legislation was temporary.

But what just happened in Hungary arguably breaches the EU's founding values enshrined in a treaty - which include democracy and the rule of law.

The Commission could withhold funds from Hungary. That would be a powerful message.

Otherwise, this will add to the sense gathering during this pandemic that the EU is more marriage of convenience than union of countries, bound by values and a sense of solidarity, in bad times as well as good.

The coronavirus crisis really brings into question what the EU is all about.