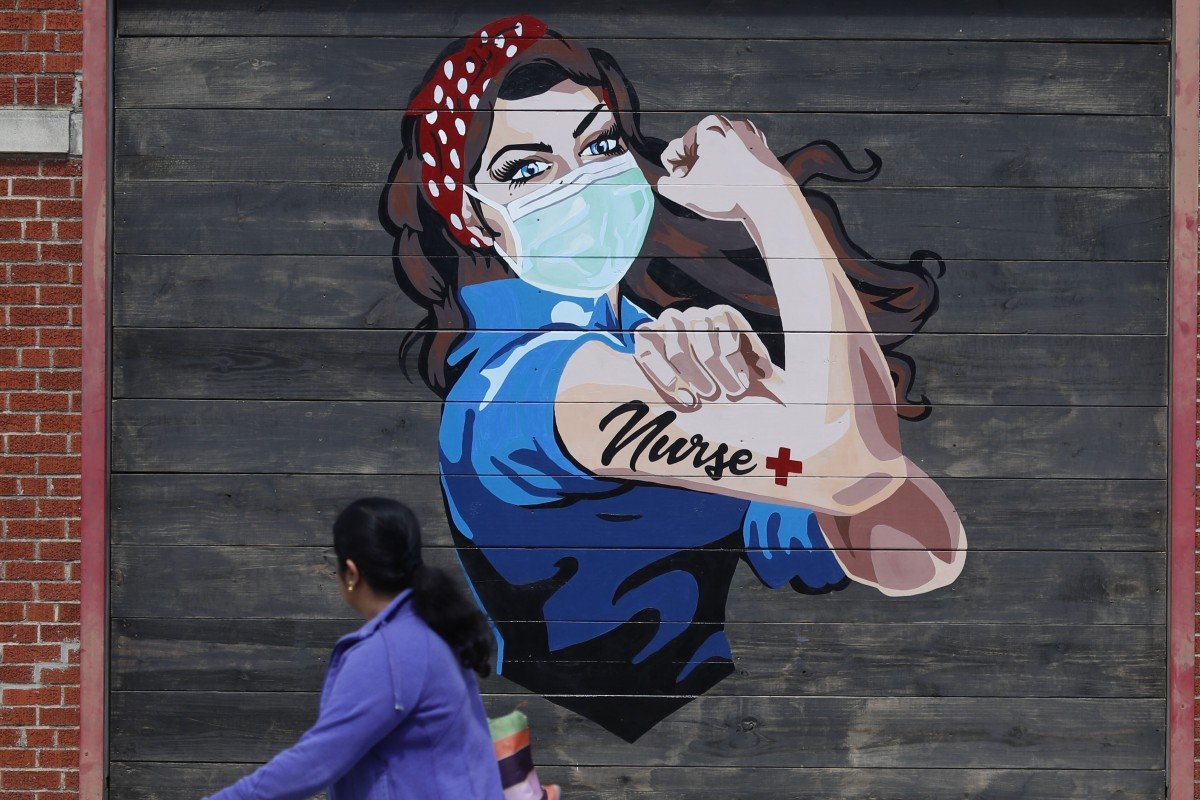 Britain sees deadliest day yet, as PM Boris Johnson’s personal battle with virus continues. Tens of thousands prepare to return to work in other parts of China as Wuhan lockdown ends

Across the Atlantic, British Prime Minister Boris Johnson was set to spend a second night in intensive care on Tuesday as he is treated for a coronavirus infection, with his designated deputy saying he would pull through because “he’s a fighter”.

Johnson’s personal battle with the virus has shaken the government just as Britain, now in its third week of virtual lockdown, enters what scientists say will be the deadliest phase of its coronavirus epidemic, which has already killed at least 6,159 people.

Meanwhile, European countries, including hardest-hit Italy and Spain, have started looking ahead to easing lockdowns after falls in their virus-related fatality rates.

In Wuhan, the Chinese city where the outbreak began in December, tens of thousands of people prepared to return to jobs in other parts of the country after an unprecedented two-month lockdown was lifted on Wednesday.

The pandemic has claimed more than 76,000 lives worldwide, with more than 1.3 million people infected.

Here are the developments:

Trump says WHO ‘blew it’ on virus

US President Donald Trump sharply criticised the World Health Organisation on Tuesday, accusing it of being too focused on China and issuing bad advice during the coronavirus outbreak.

“The W.H.O. really blew it,” Trump said in a Twitter post. “For some reason, funded largely by the United States, yet very China centric. We will be giving that a good look. Fortunately I rejected their advice on keeping our borders open to China early on. Why did they give us such a faulty recommendation?”

US conservatives have increasingly criticised the WHO during the global pandemic, saying it relied on faulty data from China about the outbreak of the novel coronavirus.


New York City’s death toll from the coronavirus officially eclipsed the number of those killed at the World Trade Centre on 9/11, health officials said on Tuesday.

At least 3,202 people have died in New York from Covid-19, according to the count released by the city.

The deadliest terror attack on US soil killed 2,753 people in the city and 2,977 overall, when hijacked planes slammed into the twin towers, the Pentagon and a Pennsylvania field on Sept. 11, 2001.

New York state recorded 731 new coronavirus deaths Tuesday, its biggest one-day jump yet, for a statewide toll of nearly 5,500, Governor Andrew Cuomo said. But in an encouraging sign, he reported that the average number of people newly hospitalised each day dropped over the past three days.


A record number of people in Britain were reported to have died from the coronavirus in 24 hours, denting hopes the spread of the disease is slowing, daily figures from the Department of Health and Social Care show.

A further 786 people died from the virus, the department said. In total, 55,242 people have tested positive for the disease in the UK.

The new figures come as Prime Minister Boris Johnson battles the disease in the intensive care ward of a London hospital. The country’s foreign minister Dominic Raab has been deputised in Johnson’s absence.

Meanwhile, another senior minister, Michael Gove, said he is self-isolating without symptoms, after a member of his household started to develop signs of the disease.


Tens of thousands of people who spent the last two months locked down in Wuhan were preparing to leave the city to return to jobs in other parts of the country after the unprecedented restrictions on movement were lifted on Wednesday.

The ban was lifted two weeks after a similar relaxation in the rest of Hubei province, which has a population of 60 million, roughly the size of Italy’s.

People can now leave the city if they have been given a clean bill of health and much of the city’s transport services, including ferries and taxis, will be allowed to resume operations.

People will still need to carry a QR code or paperwork showing they are in good health before being allowed to leave residential compounds and use public transport or enter shops.

Germany warns of spike in anti-Semitism


Hatred against Jews has spiked in Germany with the spread of the new coronavirus, the government’s anti-Semitism commissioner warned on Tuesday.

“There are direct links between the current spread of the coronavirus and that of anti-Semitism,” Felix Klein said in Berlin at the launch of a new government research project into the issue.

“There is a boom in conspiracy theories in times of crisis,” he said, describing anti-Semitism as a virus of its own that is “contagious on a social level”.

As an example, he cited claims circulating online that the pandemic is the result of a failed bioweapon test by the Israeli secret service.

Anti-Semitic crimes have increased steadily in Germany in recent years. According to government figures, the country recorded 1,799 anti-Semitic offences in 2018, up nearly 20 per cent on the year before. Of those, 69 were classed as violent attacks.


The new coronavirus could eventually infect between 10,000 and 200,000 people in Saudi Arabia, the kingdom’s health minister said on Tuesday, urging the public to adhere more closely to state directives against mixing and movement.

The country of some 30 million has so far reported 2,795 cases and 41 deaths, the highest in the six-nation Gulf Cooperation Council (GCC), despite halting all passenger flights, suspending most commercial activities and imposing a 24-hour curfew in major cities including the capital Riyadh.

“We stand today at a decisive moment as a society in raising our sense of responsibility and contributing together with determination to stop the spread of this pandemic,” Health Minister Tawfiq al-Rabiah said in a rare televised address.

Four studies by infectious disease experts indicated the number of cases was likely to reach between 10,000 and 200,000 in coming weeks, he said. The virus has already infected more than 1.3 million people worldwide.

Rabiah said the 24-hour curfews, imposed on Monday night, were needed because some were not taking the danger of infection seriously but leaving their homes and gathering in groups; passenger road traffic had only fallen by barely 50%.
The interior ministry subsequently brought forward the start of curfew in all areas not already under a 24-hour lockdown to 3pm from 7pm.


Norway, one of the first European countries to curb activities to rein in the coronavirus, will relax restrictions “little by little”, the prime minister said on Tuesday.

“Together we have taken control of the virus, therefore we can open up society little by little,” Erna Solberg told a news conference.

Current restrictions, which are in place until April 13, include the closure of nurseries and schools, refusing entry to foreigners who do not live and work in Norway and forbidding people to go to their mountain cabins if they have one.

Kindergartens will reopen between April 20 and 27; schools from the first grade to the fourth grade will reopen from April 27; and Norwegians can go to their chalets from April 20. At the same time, working from home must continue and Norwegians must get used to measures against contamination “for a long time”, Solberg said.

In addition, major sports and cultural events such as festivals would be banned until June 15.

Some 5,863 people had tested positive for the coronavirus as of Tuesday, up from 5,755 reported on Monday, the Norwegian Institute of Public Health said. Some 69 people have died of the disease so far.


Twitter co-founder and chief executive Jack Dorsey said Tuesday he was committing US$1 billion of his personal fortune to coronavirus relief through his philanthropic fund.

Dorsey said in a series of tweets that he would transfer his equity in his digital payments group Square to his limited liability corporation Start Small, contributing around 28 per cent of his overall wealth.

“Why now? The needs are increasingly urgent, and I want to see the impact in my lifetime,” Dorsey said. “I hope this inspires others to do something similar. Life is too short, so let’s do everything we can today to help people now.”

The move could be the largest from a single individual for coronavirus relief. Other technology entrepreneurs have pledged relief efforts in varying amounts.


The Pulitzer Prizes for 2020 will be announced two weeks later than scheduled as journalists who serve on the board that awards them cover the coronavirus pandemic, a spokeswoman said on Tuesday.

The prizes in categories for journalism, drama, books and music will be handed out on May 4 instead of April 20, said Dana Canedy, a New York Times editor and administrator of the Pulitzer Prizes.

“The Pulitzer board includes many high-level journalists who are on the front lines of informing the public on the quickly evolving coronavirus pandemic. As they focus on this critical mission, this postponement will provide additional time to thoroughly evaluate the 2020 Pulitzer finalists,” Canedy said.

The Pulitzers are the most prestigious awards given in American journalism.


WhatsApp on Tuesday placed new limits on message forwarding as part of an effort to curb the spread of misinformation about the coronavirus pandemic.

The new policy limits users to forwarding certain messages to one “chat” at a time, aiming to limit the rapid propagation of content that is provocative but likely to be false.

The Facebook-owned messaging platform said it took the action to enable people to concentrate on personal and private communications during the health crisis.

In recent weeks, “we’ve seen a significant increase in the amount of forwarding which users have told us can feel overwhelming and can contribute to the spread of misinformation,” WhatsApp said in a blog post.

“We believe it’s important to slow the spread of these messages down to keep WhatsApp a place for personal conversation.”