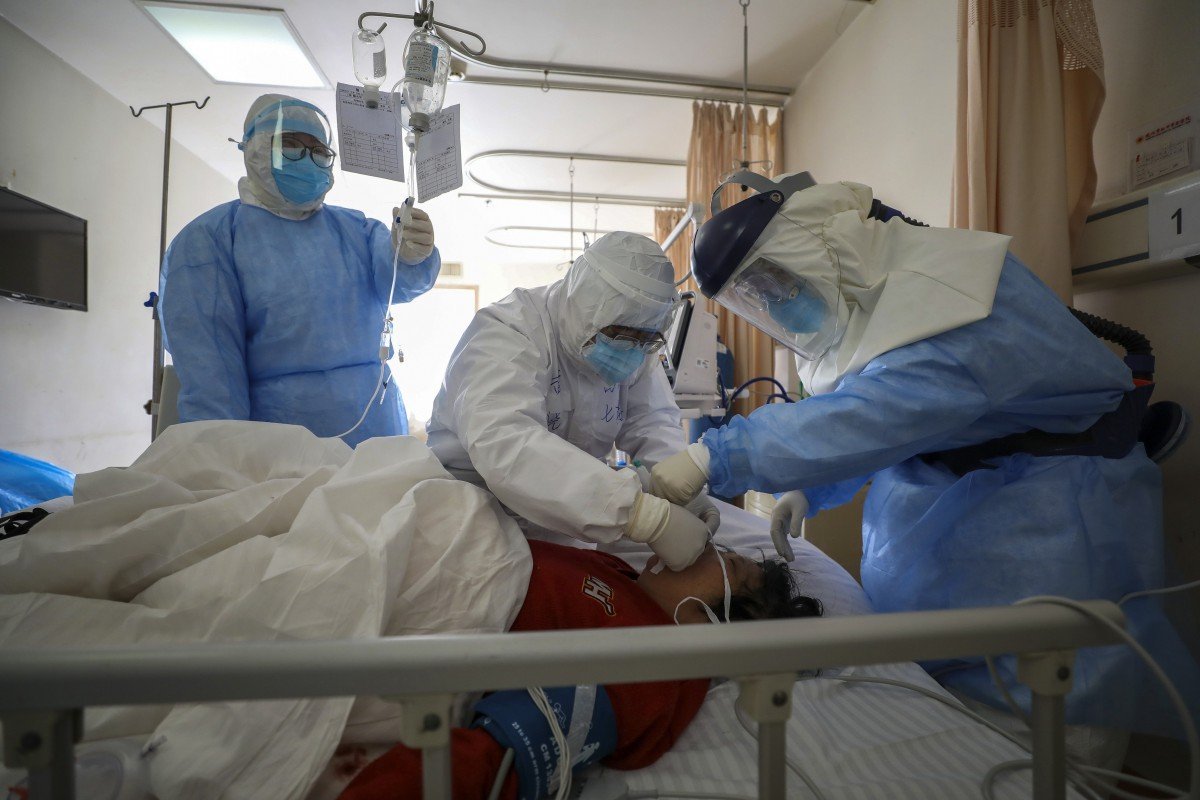 WHO delegation of medical experts heading to other regions after meetings in Beijing – but will not visit the outbreak’s epicentre of Hubei. Tourism and farming sectors assess impact, while 80 per cent of state-owned enterprises resume operations

China’s health authorities on Tuesday reported 1,886 new coronavirus cases and 98 deaths on the mainland, taking the totals to 72,436 and 1,868 respectively, as of midnight on Monday. Hubei province, the epicentre of the outbreak, reported 1,807 new cases – 1,600 of them in the provincial capital Wuhan – and 93 deaths.

China’s daily new confirmed cases of Covid-19 – the official name of the disease caused by the new coronavirus – outside Hubei have now dropped for each of the past 14 consecutive days, according to the National Health Commission, which also reported that 1,701 more patients had recovered on Monday.

The latest figures from Hubei took total cases in the province to 59,989 and deaths to 1,789. Of the Hubei totals for Monday, 1,600 new cases and 72 deaths were in the provincial capital of Wuhan, the Hubei health commission said.

Zhong Nanshan, China’s top respiratory disease expert, said the situation in Wuhan, the epicentre of the outbreak, hinged on whether human-to-human transmission could be contained, which in turn depended on separating Covid-19 patients from those with seasonal influenza.

Zhong said that the southern province of Guangdong was going to treat patients with severe cases using plasma extracted from the blood of recovered patients, which contains antibodies they developed to fight the virus. It would not be used for critically ill patients, because their condition was more complex.

Use of antimalarial drug chloroquine diphosphate as a coronavirus cure merited further investigation after some patients responded to it, Zhong said.

WHO experts to head south from Beijing

The World Health Organisation (WHO) said on Tuesday that its delegation of medical experts had on Monday visited two hospitals in Beijing and held detailed discussions with the municipality’s health authorities and the China Centre for Disease Control.

The team, who arrived in Beijing at the weekend, would visit the provinces of Sichuan, in China’s southwest, and Guangdong “later this week” to gather information on measures taken at local level and their impact in containing the outbreak, the organisation told the South China Morning Post by email.

Neither the Chinese government nor the WHO has explained why Hubei province, where most cases continue to be reported, is not on the itinerary.

The tourism sector continued to feel the effects, with Air China, China Eastern Airlines and China Southern Airlines between them refunding 13 million tickets and cancelling 78,000 flights between January 20 and February 13.

Meanwhile, the poultry industry has suffered severe losses after the suspension of feed factories and interruption to logistics disrupted the entire supply chain, the Ministry of Agriculture said on Tuesday, adding that one poultry farm said it had lost over 100 million yuan.

The government was taking steps to address the feed shortage and resume logistics, with a third of feed manufacturers yet to resume production, ministry official Yang Zhenhai said at a press conference. “Now is a key point in the cycle, when farms replenish chicks. If this situation continues, the poultry and egg markets in the second and third quarters will be impacted,” Yang said.

Most of China’s 20,000 state-owned enterprises and their subsidiaries have restarted production, according to the country’s administrative body overseeing the sector.

The State-owned Assets Supervision and Administration Commission (SASAC), which reports directly to China’s cabinet, the State Council, said 80 per cent had resumed operations, with some of the rest still unable to restart because of the outbreak. In some industries, including petrol, telecommunications and transport, almost all had resumed.

The SASAC has introduced financial relief such as low-interest loans and rent reductions to support businesses hit hard by the outbreak, which it said were available to all corporations with “no special treatment for state-owned enterprises”.

SOEs had provided about 150 million yuan (US$21.4 million) in rent reductions to their tenants, benefiting more than 14,000 businesses across the country, as of Tuesday.

A 50-year-old neurosurgeon and director of a hospital in Wuhan died from Covid-19 on Tuesday morning.

State broadcaster CCTV and Communist Party newspaper ﻿People’s Daily reported that Liu Zhiming, director of the Wuchang Hospital, was the first hospital director to die in the outbreak.

The National Health Commission said on Friday that 1,716 medical workers – 1,502 from Hubei province and 1,102 from Wuhan – had been infected with the virus and that six medical workers had died, as of last Tuesday.

The first batch of Taiwanese evacuees from the mainland returned to their homes on Tuesday after being isolated in quarantine for 14 days at three centres on the island.

Besides a businessman who tested positive for coronavirus and was immediately sent to an isolated hospital ward after arriving in Taiwan on February 3, the rest were confirmed to be not infected after their two-week quarantine, according to health minister Chen Shih-chung.

The group were the first batch of Taiwanese citizens repatriated to the island by mainland Chinese authorities. There are about 700 Taiwanese still stranded in Hubei province, but their evacuation has been stalled by a dispute between Taipei and Beijing over how they should be repatriated.

Taipei has complained about the first repatriations, in which one person sent back by the mainland was found to have been infected. Its request to send a plane and medical personnel to pick up the rest of the stranded citizens 14 days after the previous group was rejected by the mainland, on the grounds that it would take too long and jeopardise patients’ safety.

The local government in Ili, in China’s far-western region of Xinjiang, has told its predominantly Kazakh citizens to stay at home to try to contain the outbreak. In an open letter published online on Monday, the government also promised to take care of citizens’ basic needs.

“For your safety and health, please rest at home and don’t go out,” the letter said. “Health care workers as well as production and operation staff of key enterprises will work in closed operations. Please rest assured the government will increase the procurement and distribution of daily necessities and medical supplies to ensure that normal life is not affected.”


Staff from village neighbourhood committees would buy necessities such as vegetables, grains and coal and deliver them to people’s doorsteps, the letter said, with water, electricity, gas and communication bills also to be paid by the staff.

The staff would also go to hospitals to get diagnoses and treatment on behalf of citizens with common illnesses, and pick up prescribed medicines for chronic conditions, it said.

State firms such as Sinopec are making 1.3 million masks a day, with capacity set to increase.

SOEs have also donated 2.5 billion yuan to fight the outbreak and sent millions of masks, protective suits, goggles and gloves to Hubei.

A China National Pharmaceutical Group subsidiary which researched and developed the test kit for Covid-19 is producing enough kits to test 20,000 people each day. The company has so far provided test kits for 1 million people.