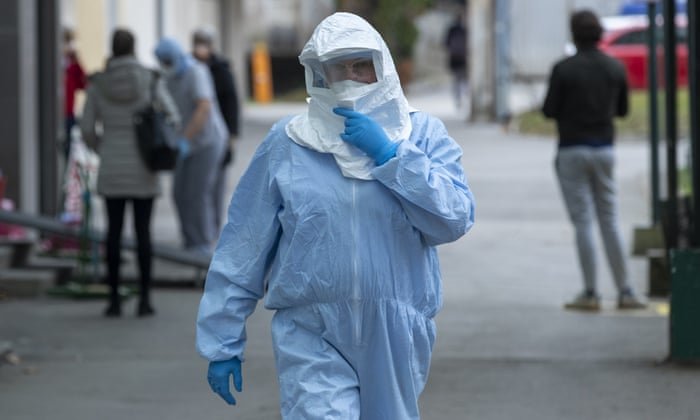 Virus appeared in new cases in Italy, Spain, Austria, Switzerland and Croatia
The spread of the coronavirus has accelerated across Europe with new cases in four countries and a rising death toll in Italy, which is desperately struggling to contain the outbreak.

Concern about the proliferation of cases prompted a dozen UK schools to send home pupils and the teachers who accompanied them on half-term skiing trips in the Italian alps to self-isolate for 14 days after their return. The schools include ones in County Antrim in Northern Ireland, Pembrokeshire in Wales, Guernsey in the Channel Islands and others in Cheshire, Liverpool, Yorkshire, Berkshire, Teesside and Cornwall.

Despite advice from Public Health England and the Department for Education that schools should stay open, two closed completely to all pupils for deep-cleaning.

Trinity Catholic college in Middlesbrough said it would reopen on 3 March, while Cransley school in Northwich, Cheshire is shut until 2 March after the headteacher said a number of pupils were showing “flu-like symptoms”.

The schools’ response came amid growing confusion over the government’s advice on whether it is safe to travel to northern Italy, with the health secretary and UK chief medical officer expressing conflicting views.

Prof Chris Whitty, the chief medical officer, initially said that advising people to avoid travel to the area was “not a reasonable thing to do”.

Matt Hancock, the health secretary, contradicted that, signalling that he thought it best to avoid northern Italy, where the bulk of the country’s 320 positive cases have emerged.

Asked on Sky News if he would fly to Italy, he replied: “Certainly southern Italy is perfectly reasonable to travel to.” But when asked if he would travel to the north, he said: “I’m not planning on [it], put it that way.”

On Tuesday evening, official Foreign Office guidance clarified the situation, advising against all but essential travel to 11 towns in northern Italy.

All 11 deaths in Italy so far have occurred in elderly people who were suffering from underlying health conditions, the youngest of whom was 62. However, the virus is spreading there, with new cases detected in Tuscany, Liguria and Sicily, well south of the centre in Lombardy.

Public Health England said that anyone who has been to a large area of the region above but not including Pisa, Florence and Rimini should self-isolate for a fortnight if they develop flu-like symptoms on returning to the UK. The advice came as:

The virus appeared in more European countries, with confirmed cases reported in Spain, Austria, Switzerland and Croatia.
Nearly £100bn was wiped off the value of Britain’s biggest companies in 48 hours, with the FTSE 100 index closing at its lowest level in a year, reducing the value of Britain’s blue-chip companies by about £35bn.
British tourists were among 1,000 holidaymakers and workers quarantined in a hotel in Tenerife after an Italian doctor and his wife tested positive for coronavirus. Austria also placed an Innsbruck hotel under lockdown when an Italian receptionist was found to have contracted the virus.
Ireland’s Department of Health called for the Six Nations rugby match between Ireland and Italy to be cancelled . The Irish Rugby Football Union has yet to confirm if the match will be cancelled or not.
The government banned the “parallel export” of two drugs – one for treating HIV, the other a malaria medication – that are being tested as potential treatments for the virus. Parallel exporting is when firms buy medicines for the UK and resell them for a higher price abroad.
The number of confirmed cases in Spain rose to seven on Tuesday after an Italian woman living in Barcelona tested positive following a recent trip to northern Italy.

Spanish health authorities had already identified two confirmed cases, one on the remote Canary island of La Gomera and another on the Balearic island of Mallorca. The Catalan case is the first detected in mainland Spain.

About 1,000 holidaymakers at the H10 Costa Adeje Palace hotel in south Tenerife have been told to stay in their rooms and were set to be tested for the virus, according to a guest. Police officers have been stationed around the building, which has been locked down.

Speaking as the 108-room Grand Hotel Europa in Innsbruck was locked down, the Austrian interior minister, Karl Nehammer, urged people not to panic. “No one can get in and out of the hotel to make sure that if other infected people are staying in the hotel, the virus won’t be spread. All these measures have one purpose – to stop the virus and its spread. There is no reason to panic,” he said.

In a further expansion of British efforts to detect and contain the virus, patients who have flu and other breathing conditions will be tested. Health officials plan to start with patients in eight hospitals in England, including some in intensive care, and also at 100 primary care centres, including GP surgeries.

Experts said the move will help show if the virus is spreading. However, officials stressed there is no evidence that it is circulating in the community at the moment. So far, 13 Britons have tested positive for coronavirus but have not suffered any major setback to their health as a result of Covid-19, the illness the virus can trigger.

“We have taken a belt-and-braces approach throughout this outbreak,” said Prof Yvonne Doyle, Public Health England’s medical director. “This new system is another important way we can help limit the impact of Covid-19 in the UK as we continue to ensure we have the best possible intelligence to protect the public’s heath.”

She added that while “there is no change in risk for the public ... taking this preparatory step will enable us to better detect and contain the spread of the virus”.

Nathalie MacDermott, an academic clinical lecturer in paediatric infectious diseases at King’s College London, said older people and children in hospital because they are struggling to breathe normally would be the most likely to be tested.

In updated advice, the Department of Health and Social Care said people who have returned since 19 February from Iran, lockdown areas of northern Italy, special care zones in South Korea and Hubei province in China should call NHS 111 and self-isolate even if they have no symptoms. Anyone who develops symptoms after coming back since that date from the defined area in northern Italy, Vietnam, Cambodia, Laos and Myanmar should do the same, even if their symptoms are mild.
Add Comment