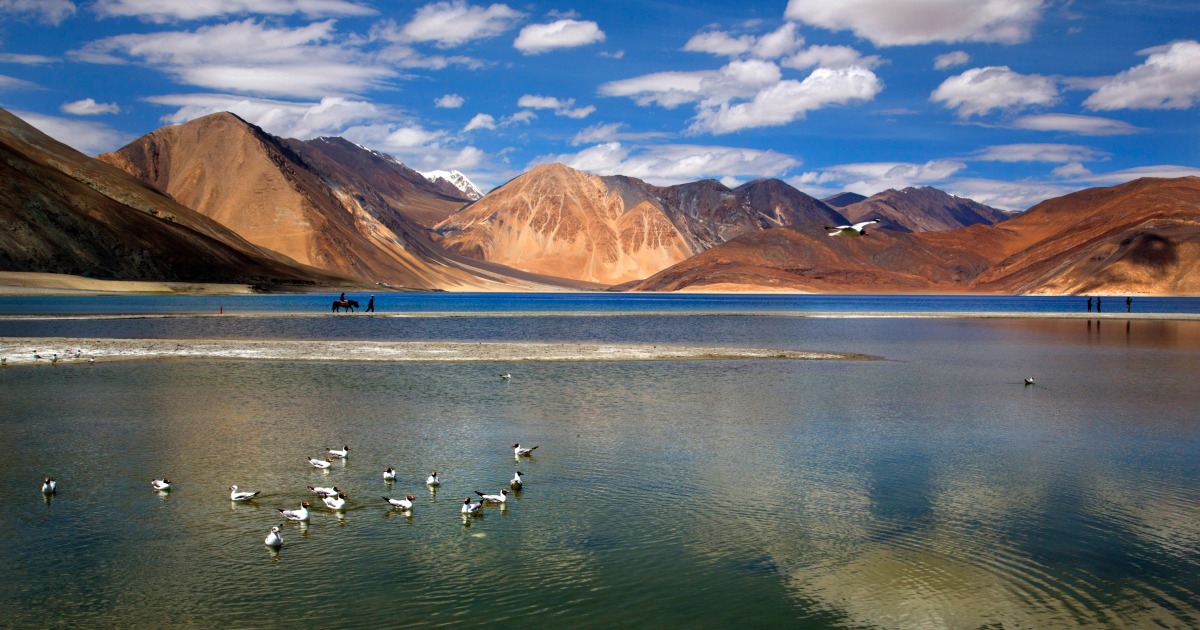 Construction of the bridge across Ladakh’s Pangong Lake comes amid military standoff between the two nuclear powers.

China is building a bridge across the Pangong Lake in the frontier region of Ladakh in Indian-administered Kashmir, raising fresh security concerns in India.

The 400-metre-long and 8-metre-wide bridge being constructed near the Line of Actual Control (LAC), the de facto border between the two nuclear powers, was spotted through high resolution satellite images, Indian media reports said last week.

India’s foreign ministry said the bridge is being constructed in areas that have been “under the illegal occupation by China for around 60 years now”, adding that the Indian government was “monitoring” the construction activity “closely”.

“The government has been taking all necessary steps to ensure that our security interests are fully protected,” ministry spokesman Arindam Bagchi told reporters earlier this month.

India and China are locked in a military standoff along the LAC in Ladakh region since April 2020, when the two sides accused each other of trespassing.

The standoff turned deadly in June that year when 20 Indian and four Chinese soldiers were killed in Ladakh’s Galwan Valley in a rare hand-to-hand combat using clubs and rocks.

The incident was followed by unprecedented mobilisation of troops on both sides of the border and the two armies holding multiple rounds of talks to resolve the standoff.

Meanwhile, the tensions also led to a spike in the construction of military infrastructure on both sides of the disputed border.

According to Indian media reports, more than 100 projects were completed by India’s Border Roads Organisation in 2021, most of which are closer to the border with China. 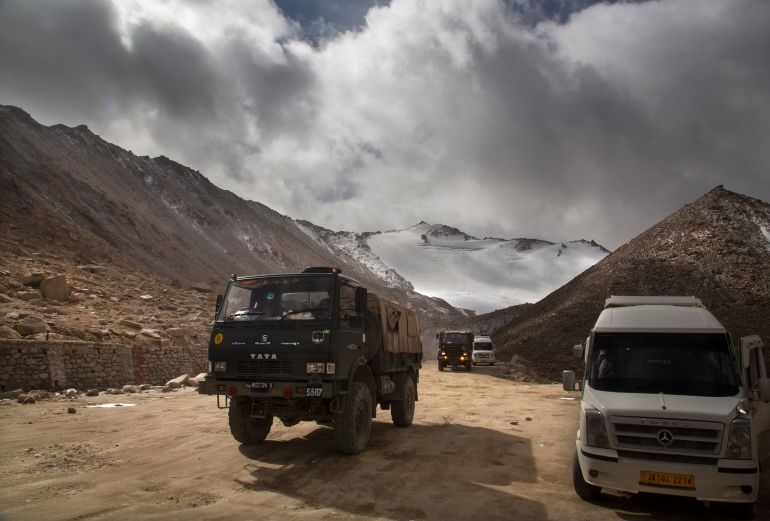 In this September 14, 2018 photo, Indian army trucks are seen near Pangong Lake in Ladakh region

Security experts say the construction of the bridge by China is a matter of “great concern” for India.

“The Chinese are very good at building infrastructure on the border areas and this is just one example of that,” New Delhi-based security expert Ajai Shukla told Al Jazeera.

Shukla said the bridge is a part of Chinese infrastructure along the LAC “so that they can move well, move quickly and deploy their forces quickly”.

“That is the standard Chinese way of border management,” he said.

According to Shukla, the Chinese are “able to deploy quickly” while India “takes too much time to do it”.

“The absence of roads and tracks and motorable sort of infrastructure means India can deploy much more slowly compared with China and because of that China has an advantage.”

However, a former Indian army officer who had served for years in Indian-administered Kashmir, told Al Jazeera the area where the bridge is being constructed has been under Chinese control even before the 1962 war with India.

India and China fought a war over disputed border areas in 1962. Since then, the two nations have not been able to agree on their 3,488-km-long (2,167-mile) border.

“They (Chinese) secured this area in 1959. The LAC is further 25km (15 miles) away from the bridge. It is very much in the vicinity of the old international border,” the retired official, who did not want to reveal his identity, told Al Jazeera.

The former officer said the building of infrastructure by both sides is an ongoing process and that the Chinese have been “far ahead” over the years.

“After the events of April-May 2020, India is also now catching up and constructing infrastructure,” he said, adding that the bridge is not going to “drastically change anything”.

“In modern militaries, such bridges or anything that is fixed can be destroyed by surface-to-surface missiles or air-to-ground missiles. There are counter measures and I don’t think it’s going to make a huge difference but certainly a better connectivity helps everybody.”

The Indian and Chinese militaries have held 14 rounds of talks since the June 2020 clashes. The talks led to some disengagement of troops from several friction points along the LAC, but not all of them. The talks have also failed to reach any agreement over the frontier.

“For there to be an agreement, both sides have to concede something. China is unwilling to concede anything. This is part of their modus operandi on the border,” security expert Shukla told Al Jazeera.

“They create infrastructure and then they sort of ensure that the other side, in this case India, does not get to create the infrastructure. So the advantage mounts in favour of the Chinese.” 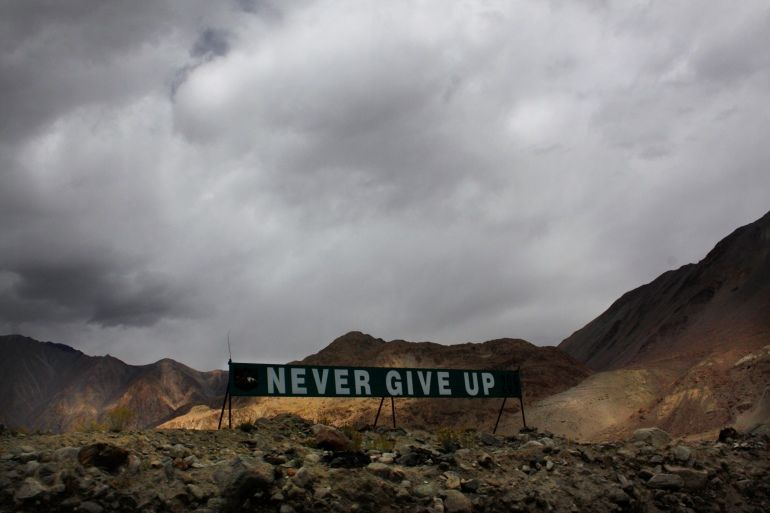 In this September 14, 2017 photo, a banner erected by the Indian Army stands near Pangong Lake in Ladakh area

Beijing, meanwhile, denied the building of the bridge was for military purposes and said India was “misinterpreting” the project.

“Ever since the border tensions between the two countries simmered to the surface, it appears that any progress connect to China’s infrastructure construction in its southwestern territories touches a nerve in New Delhi. And the news of the bridge across the Pangong Lake appears to be no exception,” the Chinese government-run Global Times said last week.

“It would be nothing but regrettable if some in India continue to misinterpret China’s infrastructure buildup along the border as serving military purposes. It is this kind of misunderstanding that has, to a certain extent, contributed to the continuing tensions between the two countries, undermining efforts to ease the tensions.”

‘We should be losing sleep’

However, Pravin Sawhney, a defence expert and editor of Force magazine, disagreed. He said the building of the bridge by China is a “part of their grey-zone operation which is done below the war threshold level”.

“While presenting the threat of a war, they will continue with their grey-zone operations which is what they are doing by building up the bridge. The overall military threat will keep increasing, it will not decrease,” Sawhney told Al Jazeera.

“I think we should be losing sleep. But that doesn’t seem to be the case. The bridge is intimidation and the troops in place are a big concern.”

The PLA on Sunday confirmed to the Indian army that its troops “found a boy”, though the identity of the person is still being ascertained.

In November last year, the Pentagon, in its annual report to the US Congress, said China has built a large village in a disputed area in Arunachal Pradesh and has been taking “incremental action” to press its claims on the LAC.

In such a backdrop, the construction of the bridge near the LAC has led to security concerns among residents in the Ladakh region.

“It is a matter of concern for us. We don’t know what China’s intention is behind its massive infrastructure buildup along the LAC but it doesn’t seem to be a positive intention,” Konchok Stanzin, a politician in Ladakh’s Chushul region, told Al Jazeera.