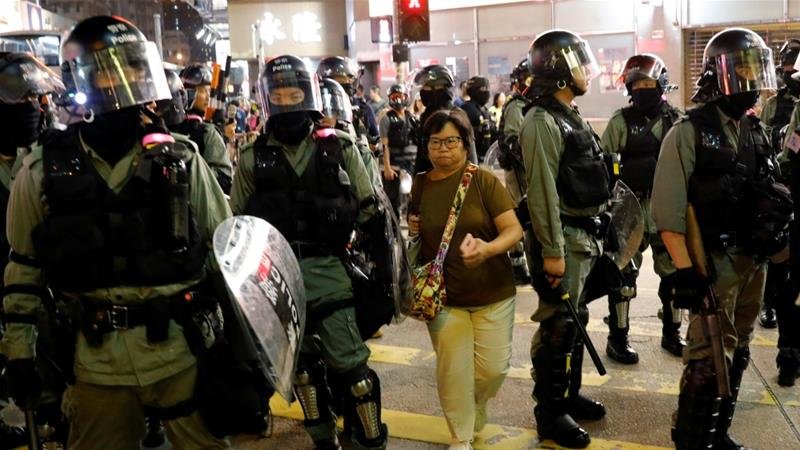 Temporary order forbids publishing of personal information about the police and their families, including their photos.

A court in Hong Kong has banned people from disclosing a wide range of personal information about police officers and their families, including names and photos, prompting concern from journalists and legal experts.

Hong Kong's High Court issued the injunction on Friday, after the police force sought its intervention to halt "doxxing" - the publication of private information online - by pro-democracy protesters.

The semi-autonomous Chinese territory has been gripped by protests for nearly five months, with hundreds of thousands taking to the streets to denounce what they see as Beijing's creeping interference in Hong Kong. China denies the claim.

Some rallies have turned violent, with protesters setting fire to government buildings and vandalising businesses seen as being pro-China. Police have responded with tear gas, water cannon, rubber bullets and occasional live rounds to disperse crowds.

Some activists attacked police with petrol bombs and rocks, furious at social media footage of random beatings, especially one against protesters cowering on the floor of a subway train.

One officer this month was slashed in the neck with a knife.

Amid the unrest, the police and justice secretary applied on Friday for a ban on disclosing names, addresses, email addresses, telephone numbers and other details, including children's school addresses.

They also sought a ban on publishing details about a police officer's Facebook and Instagram IDs, their car number plates and any photograph of an officer or their family without consent.

The court agreed to a temporary order, which will last for 14 days pending a longer legal hearing.

The injunction includes a broad ban on "intimidating, molesting, harassing, threatening, pestering or interfering" with any police officer or family member.

The current wording leaves no exceptions, including for media, making it unclear how it will be applied and whether it will restrict work by reporters.

Police did not respond to requests for clarification.

Antony Dapiran, a lawyer, described the ban as a "very alarming development".

"A serious restriction on freedom of expression and effectively criminalises a whole range of perfectly lawful acts which will now be punishable as contempt of court," he wrote on Twitter.

The Hong Kong Journalists Association said it was "extremely concerned" about the potential limitations to media freedoms and said it was seeking legal advice.

Professor Simon Young, of the University of Hong Kong's law school, told Reuters news agency the move effectively amounted to a law targeting a select group - a serious move which should be dealt with through new legislation, not an injunction.

"It opens a whole new can of worms and questions about enforcement," he said. "It reflects the dysfunction of the legislative process that injunctions are being used in this way."

Sharron Fast, a media law expert at the University of Hong Kong, said the injunction banned activity "far beyond doxxing".

"It would certainly capture the chants and name-calling that the police have long wanted to have legislative protection from," she told AFP news agency.

She added that journalists and opposition figures had also been "doxxed" during the protests but the injunction did not extend extra protections to them.

Police said in August more than 1,600 officers and their family members had been victimised by doxxing.

"Some people misused our officers' personal data to apply for loans."

But the ordinance was widely flouted by protesters incensed that police are still allowed to cover their faces.
Add Comment