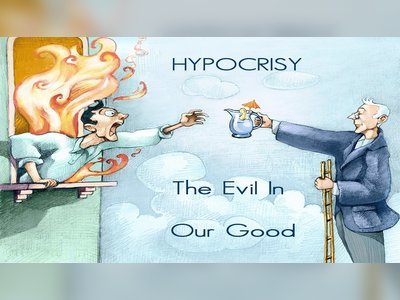 The letter below is push back from Westernized Chinese lawyers in Hong Kong. For those who are still unclear about what has been happening in Hong Kong, it is a must-read.
View full article

August West 88 days ago
It’s easy to find hypocrisy and this letter ultimately proves very little. Indeed, it damns the CCP by arguing that outside critics can be vilified and therefore dismissed. Yet the CCP is a problem. If not Hong Kong, then consider its irrational refusal to recognize the independent sovereignty of the people of Taiwan.

Charlie Bacon 130 days ago
Valid points perhaps but since when do critical comments amount to interference in internal affairs? And, given CCP practises under the cover of "national security", a critical attitude is certainly not a strange position to adopt (remember Uighurs, Falun Gong; or closer to HK: disappearing booksellers and recently Jimmy Lai). Now, that does not excuse at all street violence and senseless property destruction, but to accept Beijing's policies without due scepticism? Give me a break! And the authors forgot to mention one fact in their historical summing-up of injustices visited upon the Chinese people: the many millions of Chinese killed under the auspices of the CCP!

Whilst they are basic truths, these will most probably not be heard or read by the “ correct” people- their aspirations and motives are indeed suspect . A leopard does not change its spots .

We must not rely nor depend on them . We need to help ourselves .

Jason Heng T 137 days ago
There are just too many Chinese traitors around. The are no shortage of Chinese willing to destroy Chinese. China worst enemies are the disloyal chinese as the West cannot demonise and destabilise China without using
Chinese pawns.

William Yipp 138 days ago
Great article that exposes the hypocrisy of the USA and Britain. I agree wholeheartedly with this article.

Dato Yap 140 days ago
Being educated in the West, I strongly believe that the Chinese must always remember their 100-year humiliation which is completely removed from history texts taught in the West and in Japan. All key Western technologies were once reengineered from the Song dynasty period. To maintain global peace, China must immediately stop selling her rare earth to untrustworthy governments of the West and to Japan. China should accelerate development of 6G for space exploration/defence while her 5G takes care of manufacturing needs within the Belt n Road nations. China isn't rising. She's returning once again to the days of the Song/Ming where China was the most developed n prosperous nation on Earth.

TTSY 141 days ago
Yes the Chinese Government have full right to in store the National Security in order , the education system has to be change instantly not only in HongKong . Also for those nations whichever come under the Western Power. The Truth History has to resurface . Very Sad for Majority don’t want to know the Truth and Speak the Truth. I from English School lucky I read Chinese History. In fact Chinese didn’t want to Dominate Other for Personal Gain ,Go back to the Silks Route and Mings Voyage . The Truth is there’s!

Dr Low 141 days ago
Excellent reviews and exposition of hypocrisy of western powers.

Putra 141 days ago
Excellent arguments and indeed we live under a highly hypocritical society in the west !! The one that shouts the loudest is the worst democratic country in the world today facing enourmous challenge from its own people from highly undemocratic leadership.

Denis 142 days ago
Denis
Those who refuse to acknowledge the truth can only defend their close
d biased mind by emphatically saying it's bullshit. But history can attest the above writings as the truth.

Richard 142 days ago
Bullshit from China and not from true blood hongkies.

Sam tan 143 days ago
This Anglo Saxon Grouping is causing all the trouble in this world. It is ruthless in bashing China rightly or wrongly and jump at any excuse however far fetched and dishonest to demonize China. Underneath the white skins, all are so afraid of China and are feeling very very unsecured.

China and the rest of the world have always worshiped the western societies for their rule of law, fairness , freedom and democracy. Reports of outright falsehoods by western media and their government’s outraged double standards and mafia like arm twisting mobster behavior have shattered the image and reputation of the western nations completely. The East no longer behold the West as the land of paradise.

TB Seow 143 days ago
@ Micgael Ng. What U said is good for a perfect situation where ppl can have intelligent discourse without hooliganism.
HK has changed over the years. There' s group of ppl who do not accept freedom of speech from ppl who disagree with them.
They vandalise, threaten and beat up ppl who disagree with them.
To them, freedom of speech is onky for them. Not others. That's what NED , Fox, Apple Daily taught them.

TB Seow 143 days ago
I'm a Singaporean 77 y.o. with HK PR since 1979. Lived in China for 26 years and saw a lot.
These countries r the same ones who colonised China b4 1949.
They have been operating thru HK as a base for nefarous activities against PRC like western propaganda, smuggling of bibles (b4 digital age), encouraging dissent, even provide underground escape for Chinese dissidents.
Their operatives run for safe haven to HK when their cover was blown. Now they risk extradition.
They support the kids not becoz of the kids' cause. Only using them as pawns.

Two ppl chai 143 days ago
Bravo, the hypocrisy of these so-called Western "enlightened
democracies " have sins and evil that goes long and deep as inner Hell

rex 143 days ago
The national security law in hongkong is so blatantly obviously necessary, that any one who disagrees with it surely has a hidden agenda! The silly excuse of these china haters that the law is draconian and is going to be misused... is equivalent to telling an american he cannot carry a gun to defend himself (5th Amendment) becoz he may misuse it or somebody get killed accidentally. The right to defend oneself is sacred in the USA, exceptions like misuse are not valid. So too, any country has a right to enact national security laws. The double standards of the western politicians and their complicit mainstream (and sidestream media) is appalling and the hatred against China is as unwarranted as Hitler's hatred for jews. Maybe worse..
from Singapore .

Alice Chan 158 days ago
The author(s) of this letter should send the letter to newspapers in various countries. If any publish it, more people of the countries in question will understand the HK situation better.
I support the enactment of the NSL. I consider it is totally in compliance with the Basic Law and its enactment has in fact shown China's firm commitment to uphold the "One Country Two Systems" principle it introduced for the governance of HK and Macau.

Thomas W. 161 days ago
Malaysia too have our own NSL and I support China's sovereign right to legislate its own NSL for HK. The unholy Union of the 5 eyes nation's are nothing but hippocrates, liars, thugs and war hungry mass murderers. Leave HK and China alone and take care of your own citizens instead.

Beatrice Lee 161 days ago
A sound summary. I agree that western media & politicians have a biased & one sided distorted view of the NSL & situation in HK. It is unfortunately being exploited for political & power politics by several nations.
The authors of this article ought to put their names to it, giving their views more weight & credibility.

W Kwan 166 days ago
Feeling safe while living an ordinary life in the city are basic human rights for Hong Kong people. Hong Kongers have the freedom to have the NSL enacted for civil protection. Isn't it paradoxical when so called democractic countries oppose the enactment of NSL in Hong Kong, claiming that it violates the rights of Hong Kong people?

Stephen Lau 166 days ago
I’m also born and bred in Hk, was educated in Liverpool, England. I also did research in Canada for 3 years. Hk is indeed a very free society, very sad for the past year unrest, they were instigated by the western media and foreign governments. I fully support the new national security law by China. China has the full right to put in such law to stamp out foreign influence and punish people disrupting peace in Hk. I’m asking foreign governments not to interfere China internal policy

MK Poon 166 days ago
I was also born, bred and now retired in HK. I fully support the implementation of NSL. I must say that the western media was always giving false information to their readers !

Shao Jiaqing 166 days ago
Self-defence and security are natural and self-evident rights of every nation and every individual in the world: China is no exception. Any country or government, therefore, that takes exception to that universal principle, with respect to China or not, must be either so damned intellectually twisted, or so profoundly dishonest and hypocritical that Shame no longer knows its name!

In history, as the majority of nations know it, it was the Anglo-Saxons who first established the principle of the Rule of Law by example, something that has lasted let's say until Great Britannia's addiction to colonial expansions. Today, the countries which debunk that very same principle are the Five Eyes Alliance. Is it a coincidence that the alliance are all Anglo-Saxon countries by lineage, ideology or language? Their collective poo-pooing of the Rule of Law, or China's Hong Kong Quo-on-fa, can tell you one thing: The end of the Anglo-Saxon dominance and destiny have arrived, like all good things that come from an evil mind!

Lucy Wong 166 days ago
The truth about HK's suffering because of the local terrorists made me cry when thinking back on what happened since the second half of the year 2019. With the passing of the ESL I pray that our life could return to a harmonious and peaceful living.

Beverly Tong 167 days ago
Hong Kong should be very proud!! Hong Kong is just a small city among the 687 cities in China, and is a mere 0.5% by population, 0.012% by territory. An internal legislative drew such an international attention, as if a city Council like Phoenix in Arizona or San Diego in California, making changes to the local city ordinances, Boris Johnson In UK or Russia is voicing their objections, and China’s President Xi is raising his concerns. Made no sense at all.

Michael Ng 167 days ago
* "The views expressed in this article are the author's own and do not necessarily reflect our editorial stance."

Why the weasel words above? Have the courage to publish and the accompanying intrepidity to stand by it. Stand up for your beliefs, or not at all.
Hong Kong News
Hong Kong
Business
Tourism
Technology
Real Estate
GBA
Life Style
Health
World
Education
Add Your News
×