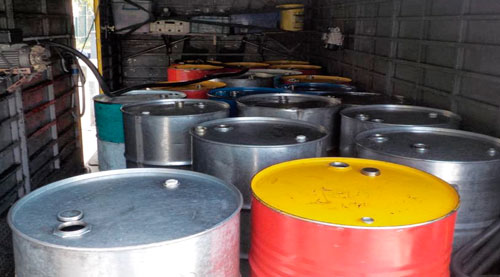 The Ombudsman called on the government to combat illegal fueling activities at the source, but the Security Bureau said it is impracticable.
The watchdog made the call on Thursday after it found that under the existing regulation, the Fire Services Department is unable to trace transactions of Euro V diesel -- light diesel oil -- between oil companies and its customers if diesel is obtained for operating illegal filling stations.

The Ombudsman provided four recommendations to the FSD and one to the Security Bureau after an investigation examining the government’s measures to combat the prevalent illicit fueling activities.

The watchdog said therefore the Security Bureau should explore the feasibility of introducing control-at-source improvement measures to combat illicit fueling activities, as FSD’s “hands are tied” due to existing law.

“The existing law does not regulate the sale of diesel oil and does not empower the Fire Services Department to mandate oil companies or distributors to provide sales transaction records, which makes it difficult for the department to tackle the root of the problem,” said Ombudsman Winnie Chiu Wai-yin.

The investigation revealed that some oil companies in Hong Kong sell Euro V diesel at wholesale prices to customers for their own use and distributors for resale, without knowing their identities.

“As such, even if the diesel is obtained for operating illegal filling stations, FSD would be unable to trace those cases,” the report said.

In response, the Security Bureau said it cannot accept the recommendation to introduce control-at-source improvement measures as it is “impracticable” and its effect of curbing illicit fueling activities is “limited.”

A Security Bureau spokesman said: “The scale, operation and mode of operation of diesel distributors and retailers are complex, involving multi-layeredness, diversity and variability.”

“The recommendation to restrict the supply and sale of dangerous goods may cause inconvenience to the public's daily lives, business operations, and more,” he added.

Another reason for the bureau to reject the suggestion is because imposing restrictions on the supply and sale of dangerous goods is not in line with the legislative intent of the Dangerous Goods Ordinance -- which controls the manufacture, storage, conveyance, and use of diesel oil.

The watchdog said the existing fines imposed by the court on illegal filling stations -- ranging from HK$5,000 to HK$50,000 -- are insufficient to create an adequate deterrent effect.

Between 2016 and 2021, no offenders were sentenced to imprisonment for participating in illicit fueling activities.

The Ombudsman applauded FSD for “conscientiously endeavoring” to combat illicit fueling activities through enforcement action ,and suggested the department continue to review the penalties and explore the need to adjust its manpower to cope with the heavy workload.
Add Comment