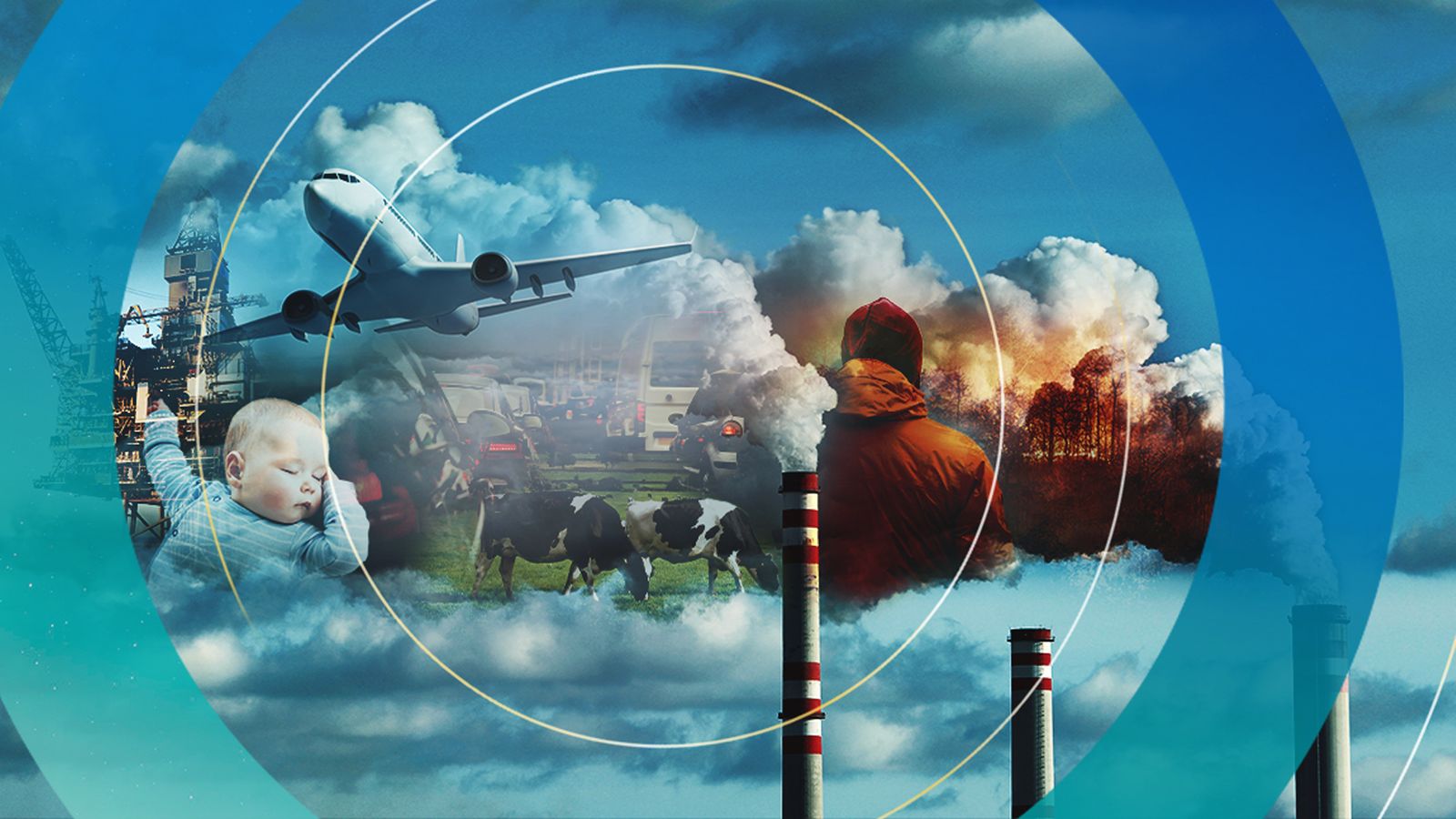 The summary, referred to as a 'litany of broken promises' by the UN, warns current fossil fuel plans put the world on course for 2C warming, but carbon capture and lifestyle changes can help.

It is "moral and economic madness" to fund new fossil fuel projects, the United Nations (UN) chief said today, as a pioneering report warned simply cutting emissions was no longer enough to curb the climate crisis.

The need to scale up the measures to remove carbon dioxide from the air are now "unavoidable" in order to meet net zero goals, the UN's Intergovernmental Panel on Climate Change (IPCC) said in a landmark document.

The UN secretary-general Antonio Guterres called the climate report a "litany of broken climate promises... cataloguing the empty pledges that put us firmly on track towards an unliveable world".

Campaigners may be regarded as radicals, the "truly dangerous radicals" are those countries increasing fossil fuel production, he said, calling for a trebled pace in the shift to renewables.

His comments land as the British government considers increased oil and gas production from the North Sea, with many states seeking to wean themselves off fossil fuels from Russia in response to its invasion of Ukraine.

While the Ukraine war "may reduce the media coverage" of the report in some countries, many are now more aware of the "multiple risks associated with dependence on fossil fuels, including energy insecurity and unaffordability as well as climate change," Bob Ward, policy director at the Grantham Research Institute on Climate Change at the London School of Economics, told Sky News.

The report, commissioned and endorsed by 195 governments, warns current fossil fuel plans put the world on course for 2C warming. It also urges an end to all fossil fuel subsidies and new coal plants and warns oil and gas will become stranded assets in the next few decades.

Eleventh hour wrangling between nations delayed its publication. Sky News understands oil-rich Saudi Arabia queried some fossil fuel language and India pushed for a distinction in responsibilities for developing and developed countries - though the United States pushed back.

The need for carbon dioxide removals

The report is the strongest yet on the need for carbon dioxide removals: ways to suck carbon out of the air including technologies that store it underground or harnessing natural methods like oceans, soils and trees to soak it up.

It says we have enough space underground to store permanently all the CO2 emissions we need to limit warming to 1.5C, but globally carbon capture and storage deployment is "far below" the level needed. In 2015 the UK government cancelled £1bn of promised funding for the technology.

Campaigners fear that carbon dioxide removals distract from the need to cut emissions, but scientists have been at pains to stress that the world desperately needs both.

Prof Michael Grubb, a lead author, said these methods would not "ride to the rescue" of fossil fuel industries. They should only be available to offset areas where emissions reductions are likely impossible, such as like aviation and cement, he said.

But he said we are beginning to see a "very significant beginning of a change of tactic within the IPCC," with more emphasis on greenhouse removals at scale.

*  Both "rapid and deep and in most cases immediate" emissions cuts and greenhouse gas removals are essential to reach 1.5C


*  For the first time a whole chapter highlights how changes diets, lifestyles, shopping habits and travel can reduce emissions. But structural and cultural change are essential too


*  Emissions in the last decade were highest in history, though rate of growth has slowed


*  We have enough space underground to lock away all the CO2 emissions we need to from now until 2100 to keep us at 1.5C, but we aren't deploying that technology fast enough


*  Many types of renewable energy have become increasingly cheap, viable and used


*  Countries are not matching promises with policies 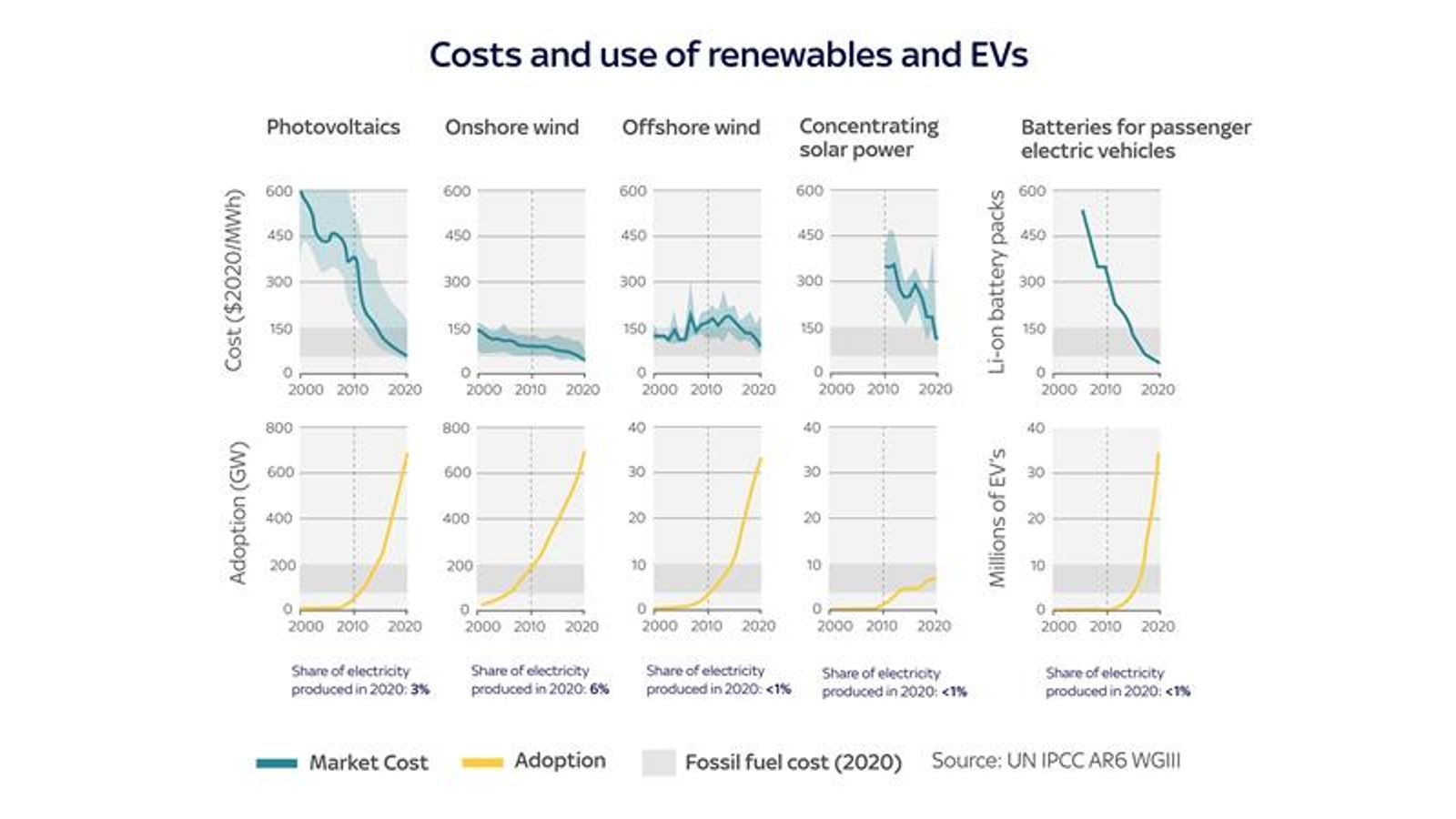 The cost of some forms of renewables and electric vehicles have fallen, and their use continues to rise, IPCC finds

Amid the bleak warnings came some reasons for hope, including the dramatic fall in the cost of renewables.

"The report very much paints a picture of glass half empty, half full - but rising," Prof Grubb told Sky News.

It says the world already has the technologies, expertise, and financial potential across all sectors to halve global greenhouse gas emissions by 2030.

And for the first time it dedicates a whole chapter to changes many consumers can make to reduce demand for fossil fuels.

What are the IPCC reports?

Today's landmark report is the final of three issued over the past eight months, with February's report focusing on impacts and last summer's on the science. They are seen as the most authoritative reports in the world and inform discussions at the annual COP climate summit.

The reports are issued every six to seven years, and the one focusing on mitigation, like today's, is often the most contentious because it concerns what leaders, businesses and citizens must do to cut climate heating pollution.

Hundreds of scientists compiled the report from thousands of studies over seven years, before the summary was scrutinised by 195 governments and finally signed off today. While the language of such reports has become more emphatic as evidence mounts, the consensual nature of the process means the strongest warnings could have been tempered.