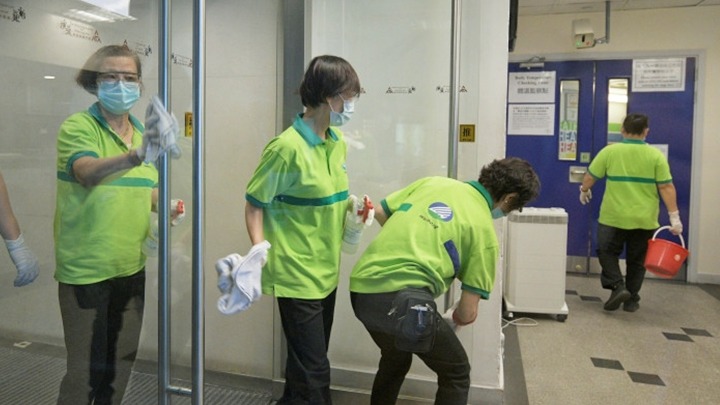 Cleaner wages docked by HK$5,000 for absence from work after Covid infection

After being infected with Covid-19, an outsourced cleaning worker was told she would get HK$5,000 deducted from her salary as the company refused to recognize her isolation order.
Starting earlier in March, citizens who tested positive via rapid antigen tests could register their information on an online declaration system and download their isolation or quarantine order as proof.

The worker was infected in March and stayed in quarantine at home for ten days. However, the company said they would not accept the isolation order, so she was deemed absent and got a HK$5,000 salary deduction.

Another outsourced cleaner was infected on March 4 but was on unpaid leave from February 28, when she developed symptoms, until March 15.

She was required to present medical proof to apply for sick leave, however she had tried to call the registration hotline and failed as she did not know how to enter the information.

She then sought help from a trade union and was finally granted a record confirming her Covid infection on April 14. But the supervisor refused to accept the record, claiming she needed a doctor's certificate to be eligible for sick leave.

Organizations that help grassroots workers said the existing online declaration system for positive results was way too complicated, and some may miss the chance to apply for sick leave.

In response to this situation, Oxfam, Cleaning Workers Union and the Hong Kong Catholic Commission for Labour Affairs wrote to the government on Thursday, requesting the establishment of a dedicated hotline to help grassroots citizens report Covid-positive results.
#COVID-19  #Covid
Add Comment