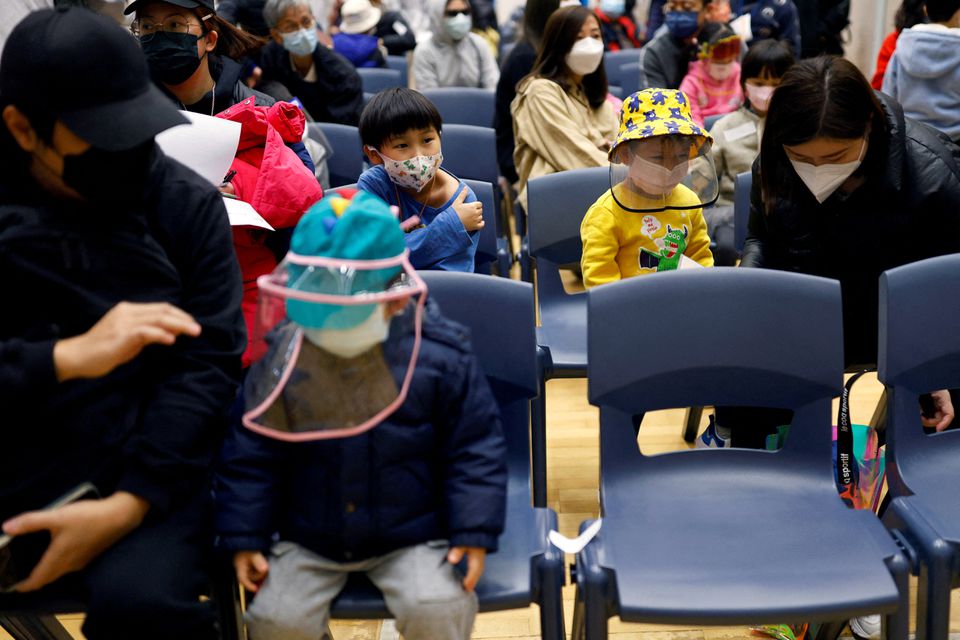 Hong Kong authorities said they would allow some children testing positive for Covid-19 to remain at home, rather than being separated from their parents and hospitalized, after a public outcry from families across the city.
Some Hong Kong families had despaired over strict Covid rules that saw even toddlers in some cases taken away from their parents and isolated, prompting some families to leave the city.

Hong Kong long had an enviable record in suppressing the coronavirus with a "dynamic zero" Covid policy, in line with that on mainland China, but as an Omicron wave now overwhelms the city, the steps that saved lives are making life unbearable for many of its 7.4 million people.

Hong Kong's Hospital Authority told Reuters late on Friday that not all Covid-positive children would be required to go to hospital.

"In general, confirmed children in stable condition can rest at home. If there is medical need for hospitalization, they will be arranged to receive treatment and care in the pediatric isolation facilities in public hospitals," the authority said in a statement.

It said it would seek to allow parents or caregivers who also test positive to enter the same wards, but that this might not always be possible given "seriously overloaded" pediatric isolation facilities in public hospitals.

The clarification comes as the city announced a record 10,000 daily cases on Friday, with some experts predicting 180,000 cases per day in March.

As it battles the surge in cases, Hong Kong has scrambled to further ramp up its construction of isolation and treatment facilities.

Local hospitals have been inundated with new cases. Universal testing is to be rolled out later with support from China.

The logistical challenges have prompted authorities to announce plans for simplified procedures that will allow those testing positive with rapid tests to report their results without undergoing more stringent nucleic acid testing.

Hong Kong officially does not allow people to self-isolate, although thousands have been doing so as infections rise faster than new rooms become available.

Meanwhile, concerns have grown for a spread of the virus in Hong Kong's nursing homes for the elderly, with 420 or over half of the city's such facilities now battling outbreaks. The rate of vaccinations among Hong Kong's elderly has been relatively low, and many suffer from chronic illnesses.

Hong Kong's outbreak presents potential political risks in a sensitive year for Chinese President Xi Jinping, who recently commented publicly on the need for the Hong Kong government to bring the outbreak under control.

Chinese health officials on Friday reported the highest daily count of Covid cases arriving from outside the mainland in nearly two years, with dozens of the more than 250 or more new infections coming from Hong Kong.
#Coronavirus  #COVID-19  #Covid
Add Comment