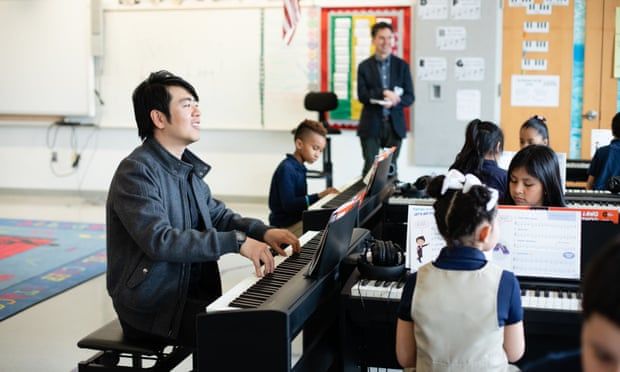 Exclusive: Plan follows schemes in US and China that have given 180,000 disadvantaged children access to keyboards
He is a Chinese superstar, a piano virtuoso who has sold millions of albums worldwide and regularly topped the classical charts. Lang Lang has also used his fame and fortune to help state schools that lack music, sounding warnings at a 2019 awards ceremony in London that such lessons had become “a real challenge” for children in the most disadvantaged communities.

Now he is bringing music to British state schools in an ambitious project that will set up state-of-the-art “piano labs” across the nation. Each lab will have 20 to 30 keyboards.

The scheme is inspired by his programmes in the US and China, in which he has invested tens of millions of pounds.

The first UK school to benefit is the Winns primary school in Waltham Forest, London’s 12th most-deprived borough, where 53% of residents are from a minority ethnic background.

It will receive 30 keyboards within the next few weeks. Every lab is accompanied by a curriculum created by the Royal Conservatory of Music of Toronto and Lang Lang, with ongoing teacher-training, grants and headphones, allowing group piano classes.

Lang Lang, who is on a world tour, is a virtuoso who performs with the world’s top orchestras. He has more than 20 million followers across social media and his album Piano Book became 2019’s biggest-selling classical album worldwide, attracting more than 170m streams.

Believing that music “heals, unites and inspires, and it makes us better people”, he has dedicated himself to education through the Lang Lang International Music Foundation and his Keys of Inspiration curriculum programme.

Asked what inspired him to support UK schools, he told the Guardian: “We were able to identify many similarities between state schools in the UK and public schools in the US in terms of the way access to music and arts can be extremely limited when budgets are cut … I was so surprised by how music classes are never a guarantee. The schools and teachers are incredible, and are so dedicated to providing their students with everything they can. But it shocked me how access to music education can be so limited.”

His foundation quotes the Greek philosopher Aristotle: “Music has the power of producing a certain effect on the moral character of the soul, and if it has the power to do this, it is clear that the young must be directed to music and must be educated in it.”

In an online video, George Young, the principal of the Arthur Tappan school in New York, says Lang Lang’s programme has had an “enormous, positive effect”, with one 10-year-old boy describing the piano lab as “like a gift from God”, adding: “It keeps me out of trouble.”

Rose said they were officially registering as a charity in the UK before “going full steam ahead”.“We’ve got very high ambitions,” he added.

While the Department for Education has argued that it invested more than £620m on diverse music and arts education programmes between 2016 and 2021, Mary Mycroft, the head of Waltham Forest music services, spoke of her hope that lives would be enhanced through Lang Lang’s support

She said: “Current funding challenges have meant that more and more schools and families are struggling to support young people to fully experience a meaningful musical education.”

Lang Lang said: “When I visit our partner schools and see the joy on the students’ faces or hear from our teachers about the progress students are making, I’m reminded of why we created this programme – to give children an opportunity to discover what they’re capable of achieving and to lift up their voices through music.”
Add Comment