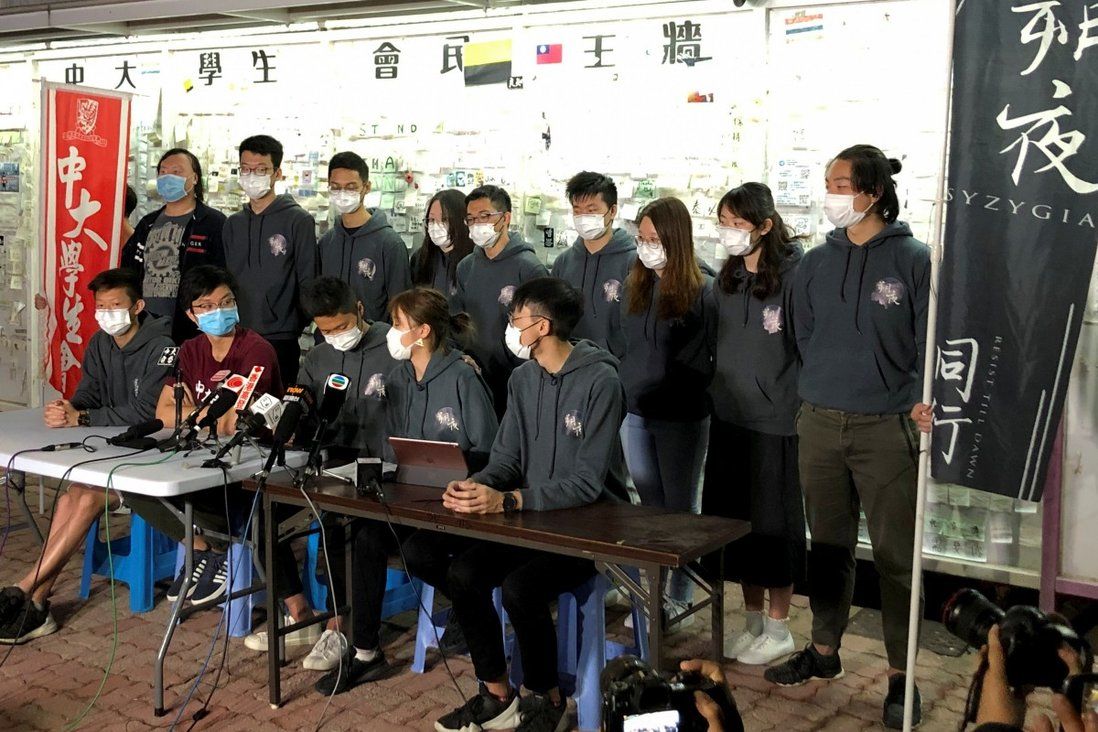 A Chinese University of Hong Kong (CUHK) decision to sever all ties with its student union on national security grounds and impose a host of tough measures on the body has provoked outrage among alumni and undergraduates, with thousands signing petitions against the action and some questioning the legal basis of the penalty.

The university dropped its bombshell on Thursday evening, announcing the unprecedented move against the newly elected union and criticising members of the body’s executive committee for failing to clarify what it said were false claims they had made about CUHK that could be in breach of the national security law.

It also demanded the body assume its own legal responsibilities by setting up an independent society or company, which the university argued was the practice of student unions of other local institutions.

University employee unions, students and alumni associations all slammed the call, a first in the student body’s 50-year history.

The controversy erupted earlier this month when Syzygia – a 12-member cabinet elected on Wednesday to run the union – accused the university of working with police to have students arrested following an attack on campus security guards.

In its 80-page election platform, the members also said the national security law infringed upon basic rights and freedoms and was a disgrace to the dignity of Hongkongers. CUHK management had strongly objected to the election manifesto.

The university also said it would stop collecting fees on the union’s behalf, suspend executive members from ex officio positions on all CUHK committees, withhold administrative support and no longer provide venues for its activities.

Within hours, petitions sprang up blasting the university’s “absurd” actions.

More than 5,700 students, graduates and staff signed a petition set up by the incoming student union, slamming CUHK for depriving the body – which was elected with 3,983 votes out of 4,099 cast – of its rights for political reasons.

Another 3,600 former student union representatives also condemned the management and urged CUHK’s convocation – a statutory body representing all graduates – to hold a special meeting to discuss the issue.

Activist Johnson Yeung Ching-yin said although student unions of other universities had for historical reasons independently registered under the Societies Ordinance, the one at CUHK was set up under the Chinese University of Hong Kong Ordinance, which also spelled out its president would always have a place in the senate.

Lawyer Chong Yiu-kwong warned that CUHK could be violating the ordinance if the union president was removed from the senate without proper legal procedures. 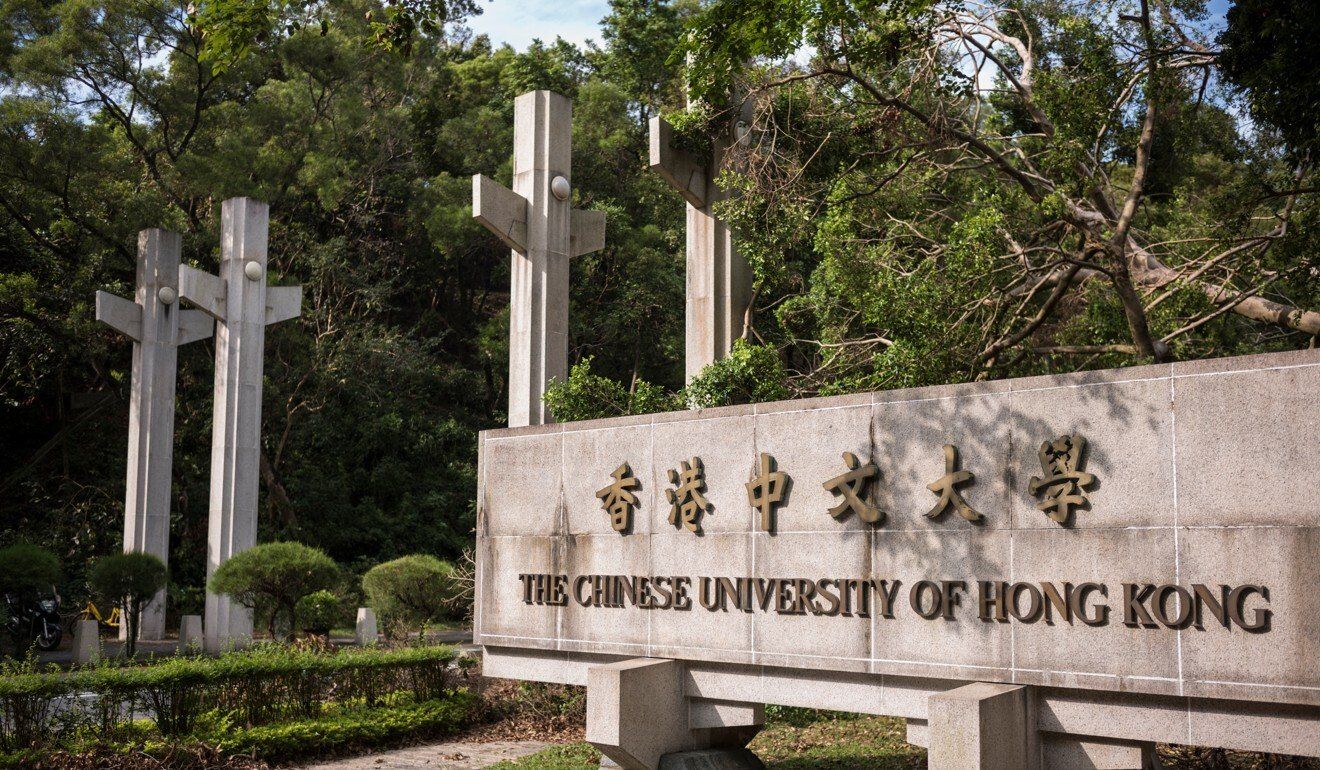 The Chinese University of Hong Kong in Sha Tin.

“The ordinance grants legal status to the union president to be a part of the senate, and the university is now terminating his rights without giving time for the president to defend himself,” Chong said.

Yeung said the executive committee – the group at the centre of the storm – could only be supervised by the student union council, which represented the interests of more than 16,000 undergraduates.

“It’s true that under the ordinance, the university might have to bear responsibility for negligence if the student union infringes any law,” he said. “But I doubt whether the university has any legal power to disqualify or disapprove any student unions. That may be the reason they only took administrative actions.”

Former president Tommy Cheung Sau-yin said many groups including sports, art and religious clubs were formed under the student union, so their daily operations could also be affected if the university indeed stopped providing administrative support.

At a press conference in the small hours of Friday, the student union said it was facing “unprecedented suppression” from the university. Incoming president Isaac Lam Yui-hei said the cabinet would decide whether to collect fees itself and had yet to consider whether to register as an independent society due to the likelihood police would object.

Owen Au Cheuk-hei, president of CUHK’s provisional student union, said the group would hand over power to the new cabinet on March 1 as scheduled, adding he would support Syzygia unconditionally.

Tensions have been escalating in recent months, after police made several arrests in response to on-campus protests in which students displayed slogans banned under the national security law.

The university – scene of some of the most violent confrontations at the height of the anti-government protests in 2019 – repeatedly said it would cooperate with police and warned of “strict penalties” against students and groups endangering national security.

Aside from CUHK, Polytechnic University and Baptist University, five of the eight public universities were left without a popularly elected student union as arrests of leaders over the past year in connection with politically sensitive events had deterred some from joining such bodies.

Political scientist Ivan Choy Chi-keung of Chinese University acknowledged the increased pressure students faced in carrying the torch of rebellion because of the enactment of the national security law last year, as well as the coronavirus pandemic, but focused on wider issues.

“All of these have made people refrain from taking part in civil movements and it will be difficult for any movement to gain traction,” he said.

“It is not just a worry for the students but for the whole of society.”

University council member and pro-establishment lawmaker Edward Lau Kwok-fan said CUHK’s actions were appropriate but revealed the council had not been consulted over the matter yet.

“Precisely because the student union is part of the university, the management had to take action when they saw moves that were advocating ideas that could be against the law. That’s the proper way to protect the interests of the university,” he said.

Separately, a CUHK spokesman confirmed it had withdrawn funding proposals for an experimental facility for biotechnology and biomedicine.

“As some lawmakers expressed concern over how CUHK handled the social incidents in 2019 and our subsequent enhancement of security measures, the university decided to temporarily withdraw the funding application to give more time for explanation,” the spokesman said, adding the university hoped to submit a new application to the Legislative Council’s Finance Committee later this term.

Pro-establishment lawmakers had earlier threatened to vote down the application, with some expressing concerns the building would be turned into “a riot base”, “a weapon factory” or “an arsenal”, references to the 2019 protests.