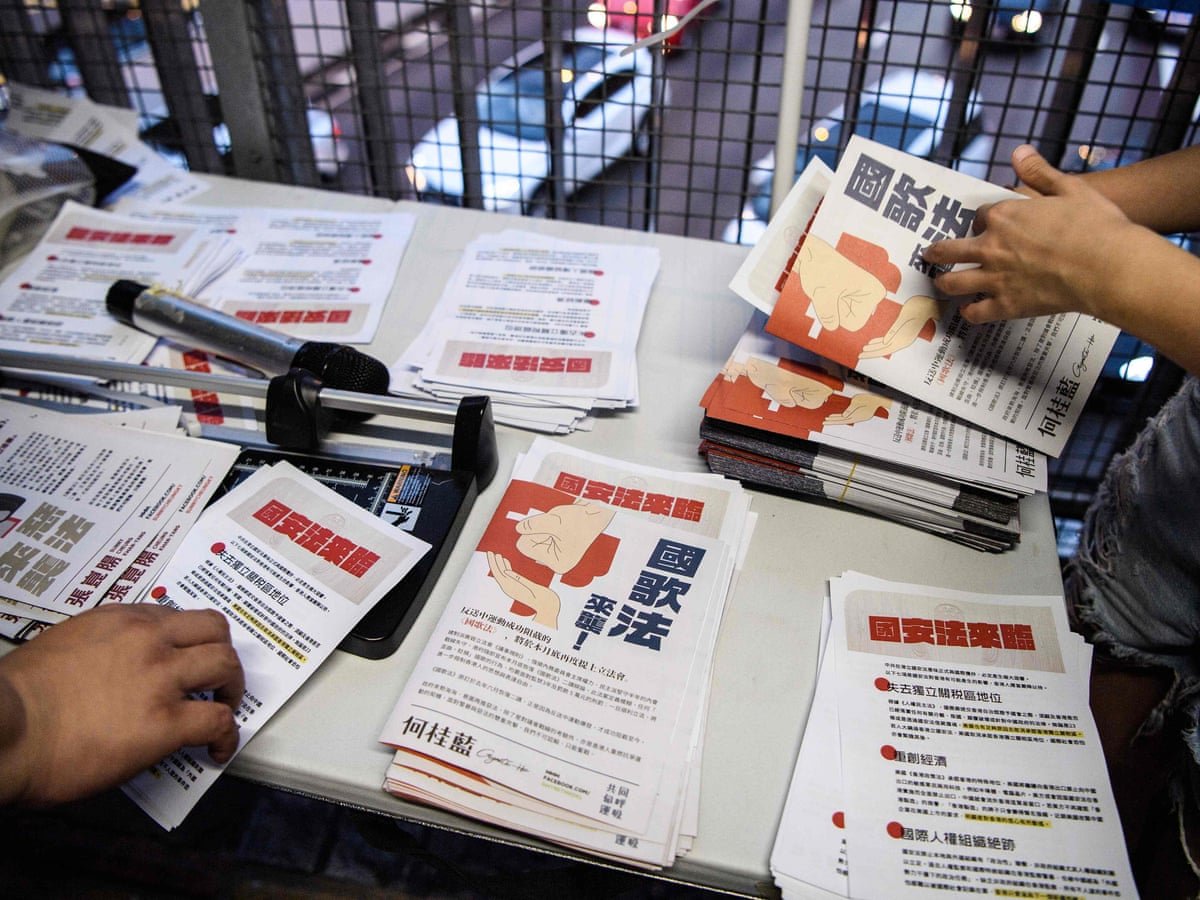 The US secretary of state, Mike Pompeo, said on Friday that the legislation was effectively a “death knell” for Hong Kong’s status as an autonomous city. He urged China to “reconsider its disastrous proposal [and] abide by its international obligations”.

The law bars subversion, separatism, “acts of foreign interference” and terrorism, all charges that have been used in mainland China to mute political opponents. The draft comes before China’s rubber-stamp parliament next week and is certain to be passed without change or real opposition.

A draft version circulating on Friday would allow the “national security organs of the central people’s government” to set up outposts in Hong Kong, which has its own police force. These security bodies would “safeguard national security,” the document states.

The spectre of the Tiananmen Square crackdown in 1989 has hung over the last year of unrest in Hong Kong. Particularly as violence escalated, there were mounting concerns among demonstrators that police or military personnel might be sent over from the mainland to clear the streets – fears that are now likely to deepen, analysts said.

“[The draft] includes specifically a provision for mainland security forces to be deployed to Hong Kong if necessary, which suggests that they have already thought about this and are prepared to put it into the law,” said Prof Steve Tsang, the director of the SOAS China Institute in London.

“So they are expecting the protests to come, and they are prepared to go and crush them. And I regrettably think they will crush them.”

Hong Kong’s chief executive, Carrie Lam, explicitly linked provisions of the new law to the “disturbances” of the protest movement.

She said in a statement that offences covered in the legislation were “exactly the situations which the political and business sectors in Hong Kong and members of the public have been worrying about over the past year”.

“The emergence of various incidents involving explosives and firearms has posed the risk of terrorism, seriously jeopardising public safety,” the statement said, adding a frequently stated and unsubstantiated charge that the protesters were manipulated by foreigners.

For years Beijing had been chipping away at the autonomy that Hong Kong was guaranteed for 50 years when the British colonial administration handed the city back to Chinese rule in 1997. But it has also had setbacks, with mass protests forcing authorities to drop a national security law in 2003 and more recently the extradition law that sparked last year’s demonstrations.

By passing laws for the city in Beijing, and allowing Chinese security forces to be stationed there, China’s Communist party leadership is sweeping away even a pretence of autonomy. Helena Wong. a pro-democracy legislator, said: “Even the [Hong Kong] government will not be able to regulate what the [Chinese security] agents do in Hong Kong.”

News of the law stunned Hong Kong’s pro-democracy activists and lawmakers, and there was an outpouring of fear, grief and anger in the city. On Friday afternoon legislators protested against the decision in the legislature and were forcibly removed. Street demonstrations will follow, with the first mass gathering expected on Sunday.

Downloads of VPN software that allows users to circumvent Chinese censorship and browse anonymously rose overnight after the law was announced.

There is no hope that the legislation can be altered or delayed by people turning out on the streets in Hong Kong, but over the past year many protesters said they had come out on to the streets out of desperation rather than in real hope of change.

Even if authorities have more tools to stop demonstrations, and an even clearer message of intent to break the movement, intimidation alone is unlikely to keep Hong Kong’s people off the streets. Some will be hoping to garner international support, which they see as the only slim hope of pushing back against Beijing.

Pompeo’s statement attacking China’s “disastrous” move was part of a strong chorus of international condemnation. In a joint statement with the Australian and Canadian foreign ministers, the UK’s foreign secretary, Dominic Raab, said he was “deeply concerned” about the proposed new law, and he emphasised that the “legally binding” 1984 agreement – which promised Hong Kong 50 years of autonomy – remained in force.

“Making such a law on Hong Kong’s behalf without the direct participation of its people, legislature or judiciary would clearly undermine the principle of ‘one country, two systems’, under which Hong Kong is guaranteed a high degree of autonomy,” the statement said.

A bipartisan bill being introduced by the US senators Chris Van Hollen and Pat Toomey would impose sanctions on officials and entities that enforce any new national security laws, the Washington Post reported.

China’s foreign ministry said it would fight back against any US attempt to influence the law.

It is unclear how many western countries will have the appetite to enforce costly sanctions or other penalties at a time when the coronavirus pandemic is causing massive economic strain.

Lam insisted that Hong Kong was and “will remain a very free society”. She brushed off concerns about the economic impact of China’s move.

Hong Kong has functioned as a regional hub for many international companies who want to do business in China but also seek the protection of an independent judicial system. It has also provided Chinese firms with access to international investment and the global financial system.

With the legal firewalls that insulated the city effectively torn down, its economic future is in question. The stock market plunged on Friday and there were already reports of people seeking to sell their assets or move them overseas.

But Beijing has apparently decided it can bear the economic hit of bringing Hong Kong back under closer control. “From Xi Jinping’s perspective, apparently the worst-case scenario is not that bad,” said Tsang, the SOAS professor. “Hong Kong is around 3% of China’s economy. Covid-19 cost more than 3% of growth and didn’t bring down the economy.”