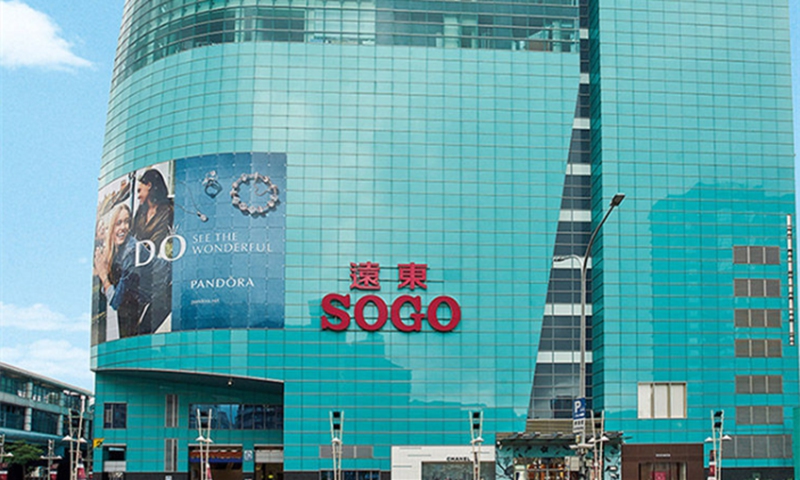 The Chinese mainland has fined the Far Eastern Group (FEG), a Taiwan-based company operating in several mainland provinces, for violations of business regulations, after the mainland declared that business founders and sponsors who support secessionist Taiwan politicians in the island will be punished.

Experts from both the mainland and Taiwan said on Tuesday that law enforcement actions need to be accurate and thorough, so the mainland can effectively sanction the real sponsors of Taiwan secessionist politicians and avoid harming the majority of Taiwan companies which are doing business in the mainland.

Analysts said Taiwan firms will not be scared away from conducting businesses in the mainland because of the huge market and the profitable policies. The actions will only improve economic ties across the Taiwan Straits, to provide a healthier business environment for Taiwan companies operating in the mainland.

Taiwan business circles in the mainland expressed their support for the anti-secessionist policy and the mainland's law enforcement actions, stressing that companies which have supported the Taiwan secessionists - like the Democratic Progressive Party (DPP) which rules the island - are not the majority of Taiwan firms in the mainland, and they will keep and develop their business and investment to support cross-Straits joint development and the reunification process.

The Global Times found that media and observers in the island have associated the names of some infamous secessionists in Taiwan with some Taiwan-based companies like FEG after the mainland launched the law enforcement process.

"Su Tseng-chang," head of Taiwan's executive body who is a key member of the secessionist DPP authority and a die-hard Taiwan secessionist who has been blacklisted and sanctioned by the mainland, and his daughter "Su Chiao-hui," a DPP "lawmaker" on the island with an extreme secessionist stance, as well as "Far Eastern Group" and "DPP" ranked top of the search list on Tuesday on the website of the accountability authorities on the Taiwan island for public inspection of political campaign contributions.

FEG donated NT$58 million ($2.09 million) to the DPP in the 2020 regional legislative elections, making it the DPP's biggest donor, according to statistics posted online by authorities on the island. Other DPP donors in 2020 included Highwealth Construction, which donated NT$11.6 million and Hon Hai Technology Group, known as Foxconn, which financed NT$4 million.

Far Eastern New Century, whose holding company is FEG, said on Monday it is taking "a humble approach to fines from mainland regulators and will prevent such things from happening again," after it received fines equaling about 36.5 million yuan ($5.7 million) in the mainland for violations of environmental protection regulations and other matters, media reports noted.

Far Eastern New Century is one of a number of firms funded by FEG that have been fined for a series of violations of laws and regulations in the mainland, after law enforcement agencies in various provinces and regions launched investigations into the companies, the Xinhua News Agency reported on Monday.

Commenting on the regulatory actions against the Taiwan firms on Monday, a spokesperson for the Taiwan Affairs Office of the State Council said that die-hard Taiwan secessionists, affiliated enterprises and financial donors must be punished in accordance with the laws.

To pick FEG as an example to warn Taiwan companies with similar backgrounds and behaviors shows that the mainland wants to minimize the negative impact to cross-Straits economic ties and to accurately punish the companies which not only have funded the secessionist politicians, but also openly supported secessionism and brought duplicity on the matter of the Taiwan question to earn money from the mainland and support secessionism in the island at the same time, experts said.

FEG was founded in the mainland and moved to Taiwan in 1949 with the Kuomintang (KMT) authorities which escaped to the island after having been defeated by the Communist Party of China. After decades of development, the group has deep and extensive political and business ties in the island.

Although the group was privileged and protected by the KMT, which used to rule the island and is now the biggest opposition party, in the past two decades, it started funding the DPP authority after Chen Shui-bian, former Taiwan regional leader who sought secessionism, took office in 2000, according to Taiwan experts. Now, the FEG's financial support for the DPP far exceeds that for the KMT.

Taiwan media said that FEG is the main investor of die-hard Taiwan secessionist Su Tseng-chang and his daughter. In the 2020 election in Taiwan, FEG donated NT$68 million to the DPP and KMT, becoming the largest sponsor. In the latest lawmaker election, the group donated to 31 DPP members and 14 KMT members.

Wang Jianmin, a senior cross-Straits expert at Minnan Normal University in East China's Fujian Province, told the Global Times on Tuesday that due to the rise of the DPP, if Taiwan companies do not offer financial support to DPP politicians, the ruling DPP will make trouble for them in the fields of business, finance and daily operation. So many Taiwan entrepreneurs have bowed to the DPP for both self-protection and profit.

For instance, the media outlet China Times in Taiwan, with a pro-reunification political stance, was coerced and threatened by former Taiwan regional leader Chen Shui-bian to adjust its reporting position, otherwise it would not be able to get bank loan under due to DPP pressure, Wang said.

But the FEG is not a company coerced by the DPP to offer donations, but a long-standing major sponsor with a series of opportunistic acts.

Chiu Yi, a former KMT "lawmaker" in Taiwan who investigated the corruption case of secessionist former Taiwan regional leader Chen and is now a Taiwan-based scholar, told the Global Times on Tuesday that Douglas Hsu, the CEO of FEG, gave $NT80 million in political donations to Chen's wife Wu Shu-chen in 2002.

In 2006, about NT$360 million was wired into Chen's account, which Taiwan's special investigation team uncovered. This was an important part of Chen's corruption case that saw Chen sentenced to life imprisonment in 2009.

"Hsu has been making political bets on both sides," and the mainland's latest move will deter Taiwan secessionists' donors, and cut off channels of secessionists' political participation, Chiu said.

In addition to political donations, according to Taiwan media reports, the FEG is one of the Taiwan companies which have openly supported secessionist DPP candidates by advertising openly during the election process.

"Not only political donations, public support and policy coordination is also the key elements for the mainland in considering sanctions. This could make the punishment more accurate and precise," Wang said.

After the law enforcement actions against the FEG, some pro-secessionist Taiwan media hyped that the mainland's moves will cause a "chilling effect" to Taiwan companies in the mainland.

But analysts said the mainland's crackdown on sponsors who invest in Taiwan secessionists is a long-existing measure rather than a new or temporary act, and the sanction has nothing to do with most Taiwan companies in the mainland. They stressed that as long as Taiwan entrepreneurs do not support Taiwan secessionists, they do not need to be worried at all.

Taiwan entrepreneurs need to realize that "Taiwan independence" secessionism is the common enemy of both the mainland people and the Taiwan people. Opposing secessionism is to create a better business environment, which is good for Taiwan companies, which are always welcome in the mainland, said a Beijing-based senior expert on Taiwan-related affairs who asked for anonymity.

"They [the majority of Taiwan companies in the mainland] are a positive force to promote cross-Straits exchanges and cooperation, and even push forward the reunification process," he said.

"Our Taiwan business circle all supports the penalty decision because it is definitely intolerable that firms like the Far Eastern Group are lining their pockets in the mainland but participating in secessionism in Taiwan and even stirring chaos in international society," Wu Jia-ying, chairman of the Taiwan Businessmen's Association in Xiamen, Fujian Province, told the Global Times on Tuesday.

Wu's remarks were echoed by Xue Qingde, a Taiwan-based businessman who has been investing in Fujian's Pingtan county.

"In this particularly severe and complex period of cross-Straits relations, Taiwan enterprises and entrepreneurs should stand on the right side of history to promote national reunification and the great rejuvenation of the Chinese nation, while striving for business development," Xue told the Global Times on Tuesday.

Chiu from Taiwan echoed that by punishing the secessionists' donors, the mainland will bring greater space and opportunities to more qualified and anti-secessionist Taiwan enterprises to do business in the mainland. "This is essentially to protect the good and crack down on the bad," Chiu said.

The mainland is always the best destination for Taiwan companies to do businesses, Wang said. "No country or region can replace such a huge market, with loads of investment and development opportunities, and the preferential policies to specifically benefit Taiwan companies," he said.

Moreover, ever since the outbreak of COVID-19, the global economy has fallen into difficulties. But the mainland's economy has maintained a sound and steady development… and these are the most fundamental reasons why Taiwan companies will keep developing their businesses in the mainland rather than run away only because of some anti-secessionist sanctions, experts said.

Xue also said that "the support from the mainland for Taiwan enterprises should be 'conditional.'"

"Apart from enjoying the same treatment as the mainland enterprises, Taiwan-funded enterprises often get special support and enjoy preferential policies from local governments in the mainland and thus had seen good development.

"The mainland transferred huge benefits to the island of Taiwan in cross-Straits trade and economic cooperation, and these resources should be precisely given to patriotic enterprises and entrepreneurs. The change of trade policy can reduce the profit channels of donors for Taiwan secessionists," Xue noted.

Despite the current cross-Strait tensions, Wu said Taiwan firms are expanding their footprint in the mainland to explore growth opportunities in the vast market in the motherland.

"More big Taiwan firms have increased investment in Xiamen since the start of 2021, which has witnessed obvious year-on-year growth in terms of investment value," Wu said.

Taiwan's exports to the Chinese mainland and Hong Kong rose to $16.22 billion in October, up 14.3 percent year-on-year, according to data released by the island's finance authorities.

The mainland and Hong Kong remain Taiwan's biggest export destination, with cross-Straits exports accounting for 40.4 percent of the island's total exports in October 2021.