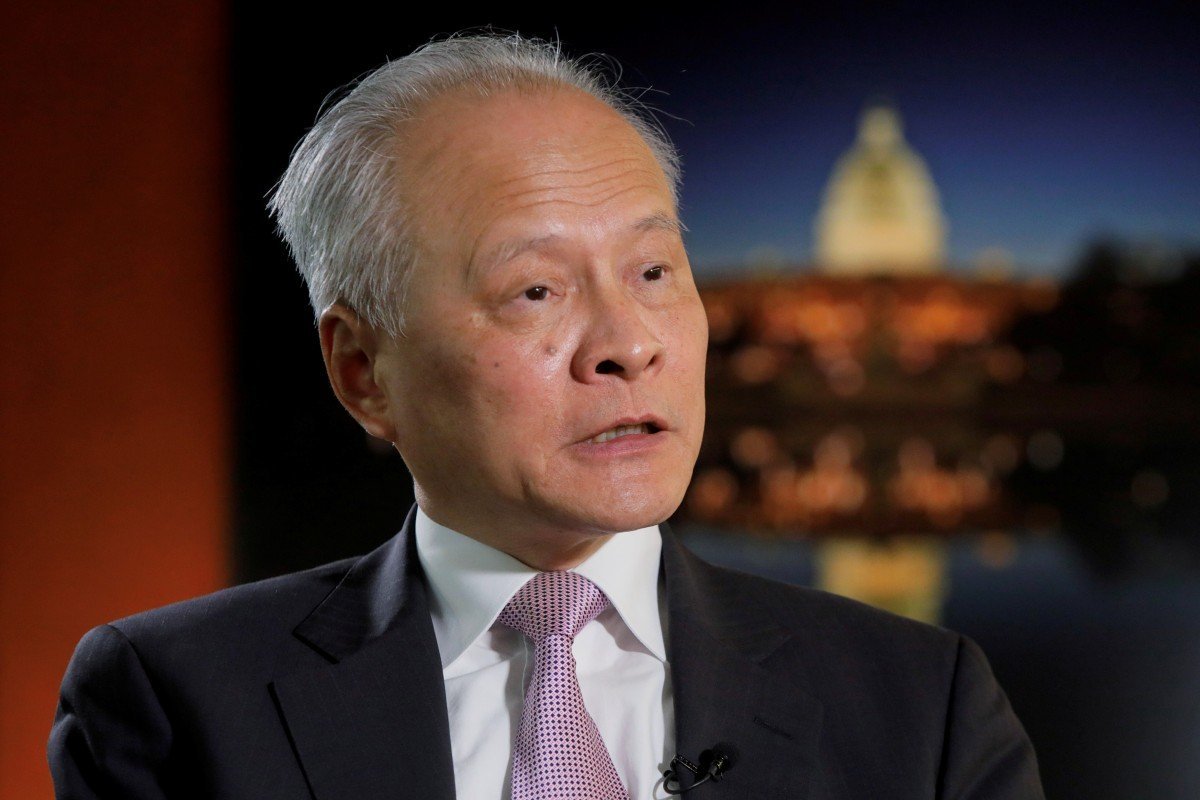 Ambassador Cui says little attention is being paid to scientists while politicians are preoccupied with ‘groundless accusations’. Ambassador also defended Beijing’s handling of the disease, which has drawn fire from US president and others

Beijing’s envoy to Washington accused senior US politicians on Tuesday of ignoring scientific expertise in favour of pursuing “groundless accusations”, after US President Donald Trump said over the weekend that Beijing may be “knowingly responsible” for the coronavirus outbreak.

“So little attention is paid to the views of the scientists,” Ambassador Cui Tiankai, appearing on a webcast event organised by Bloomberg News, said of the US.

“And some politicians are so preoccupied in their efforts for stigmatisation, for groundless accusations.”

Last week, Trump amplified unproven theories that the coronavirus may have emerged from – or even been bioengineered at – a virology lab near Wuhan, the central Chinese city where the outbreak first occurred.

Trump said that a line of inquiry was being actively pursued by his administration; US Secretary of State Mike Pompeo recently called on Beijing to let independent experts visit the lab to conduct an on-site investigation.

Trump’s interest in such an inquiry comes despite the acknowledgement by Dr Anthony Fauci, the administration’s top infectious disease expert, that recent research by leading virologists had found the contagion’s mutations were “totally consistent” with animal-to-human transmission.

“There is little attention being paid to the views of scientists,” Cui, who did not mention Trump by name, said on Tuesday. “What are these people up to? Why are they doing all this when our priority is to save lives? Why, at a time when we need science so badly, are there so many rumours swirling around?” During his daily press briefing on Tuesday, Trump was asked point-blank if any of his intelligence staff have discussed with him the conspiracy theory that coronavirus was created in a Chinese lab.

Cui appeared on Tuesday to concede that Chinese officials had not been entirely blameless in their own embrace of speculative theories.

When asked about comments made by Zhao Lijian, a mid-level foreign ministry official who publicly boosted conspiracy theories that the virus was brought to Wuhan by US soldiers last year, Cui said that such blame games were being played out by “a small number of such politicians” and did not reflect the sentiments of either country’s wider public.

Zhao’s comments in March led to a significant uptick in the Trump administration’s anti-China rhetoric, including Trump’s repeated description of the disease as the “Chinese virus”.

Trump has since dropped the term, but has continued to challenge China about the speed of its response and the accuracy of its case numbers, claiming last week without evidence that the country had the most deaths in the world.

To date, more than 42,000 people have died from Covid-19 in the US, nearly 10 times higher than China’s official toll of around 4,600. The pandemic has seen Congressional Republicans and administration officials rally around a strategy to hold China responsible, including calls for financial reparations.

On Tuesday, Missouri’s state attorney general, a Republican, filed a lawsuit in federal court against the Chinese government, alleging that Chinese officials were “responsible for the enormous death, suffering, and economic losses they inflicted on the world, including Missourians”.

But as election season draws near, Cui said, he doubted that Americans wanted to make China the “centrepiece” of their domestic political debate, suggesting that the public was instead most concerned about matters like health care, education and job security.

Cui's remarks came as a new Pew Research survey found that two-thirds of the US public held unfavourable views of China – a new high and up significantly from the 47 per cent when Trump took office in 2017. Almost three-quarters of Americans said they had “no confidence” in Chinese President Xi Jinping to “do the right thing regarding world affairs”.

Addressing criticism – much of it from US administration officials – that Beijing had played down the severity of the outbreak and withheld data, Cui said: “We are doing our best to have transparency. We are discovering, we are learning. At the same time, we are sharing.”

As tensions between Washington and Beijing have simmered, Cui said that he hoped the pandemic would offer an opportunity for “a serious rethinking of the very foundations of this important relationship”, arguing that the crisis had exposed the two countries’ shared vulnerabilities and “true common interests”.

Political observers have forecast, however, that a softening in US policy on China in the near future is unlikely, given the bipartisan consensus in Washington in recent years around a more hawkish approach toward Beijing.

That dynamic is also playing out in the presidential race, with the campaigns of both Trump and his Democratic challenger Joe Biden seeking to present tough positions on China, especially over its handling of the outbreak.

“Bashing China is always good politics in the US, and clearly they’ve probably done some focus groups and maybe this [approach] played well,” Susan Thornton, a former assistant secretary of state for East Asian and Pacific affairs, said during a separate webcast organised by New America. In that vein, Trump saved his strongest language during Tuesday’s briefing for China:

"There's nobody ever been tougher on China than me … China's been ripping us off for years,” the president said.

“I’ve even asked the leaders of China: How did this ever happen where our country loses tens of billions of dollars a year. And I don't mean just tens. Take a look, $200 billion, $400 billion, $500 billion a year. How did they ever let anything like this happen?"
As for whom Beijing was backing in the looming election, Cui refused to weigh in.