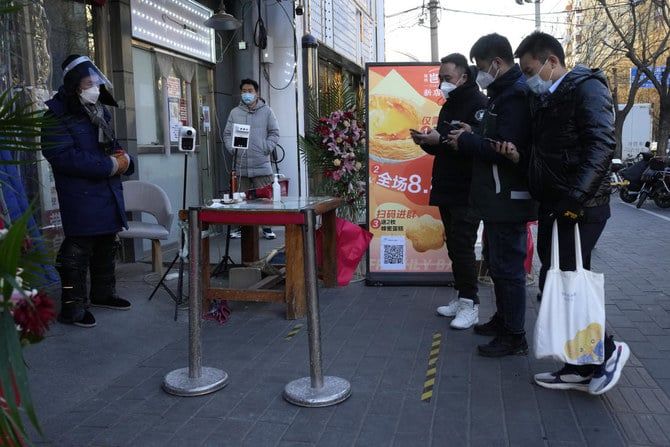 Businesses reopened and testing requirements were relaxed in Beijing and other Chinese cities on Monday as the country tentatively eases out of a strict zero COVID-19 policy that sparked nationwide protests.
Local authorities across China have begun a slow rollback of the restrictions that have governed daily life for years, encouraged by the central government’s orders for a new approach to fighting the coronavirus.

In the capital Beijing, where many businesses have fully reopened, commuters from Monday were no longer required to show a negative virus test taken within 48 hours to use public transport.

Financial hub Shanghai — which underwent a brutal two-month lockdown this year — was under the same rules, with residents able to enter outdoor venues such as parks and tourist attractions without a recent test.

Neighboring Hangzhou went a step further, ending regular mass testing for its 10 million people, except for those living in or visiting nursing homes, schools and kindergartens.

In the northwestern city of Urumqi, where a fire that killed 10 people became the catalyst for the recent anti-lockdown protests, supermarkets, hotels, restaurants and ski resorts reopened on Monday.

The city of more than four million in the far-western Xinjiang region endured one of China’s longest lockdowns, with some areas shut from August until November.

Authorities in Wuhan, where the coronavirus was first detected in late 2019, and Shandong scrapped the testing requirement for public transport on Sunday.

And Zhengzhou — home to the world’s largest iPhone factory — on Sunday said people will be allowed to enter public places, take public transport and enter their residential compounds without a 48-hour negative test result.

The World Health Organization has cheered China’s loosening of its zero COVID-19 policy, which came after hundreds took to the streets across the country to call for greater political freedoms and an end to lockdowns.

While some COVID-19 rules have been relaxed, China’s vast security apparatus has moved swiftly to smother further rallies, boosting online censorship and surveillance of the population.

And as officials have dismantled testing facilities, long queues have appeared around those that remain, forcing residents to wait in cold temperatures to get tests that remain obligatory across much of China.

“What’s the point in closing testing booths before dropping the need to show test results completely?” another asked.