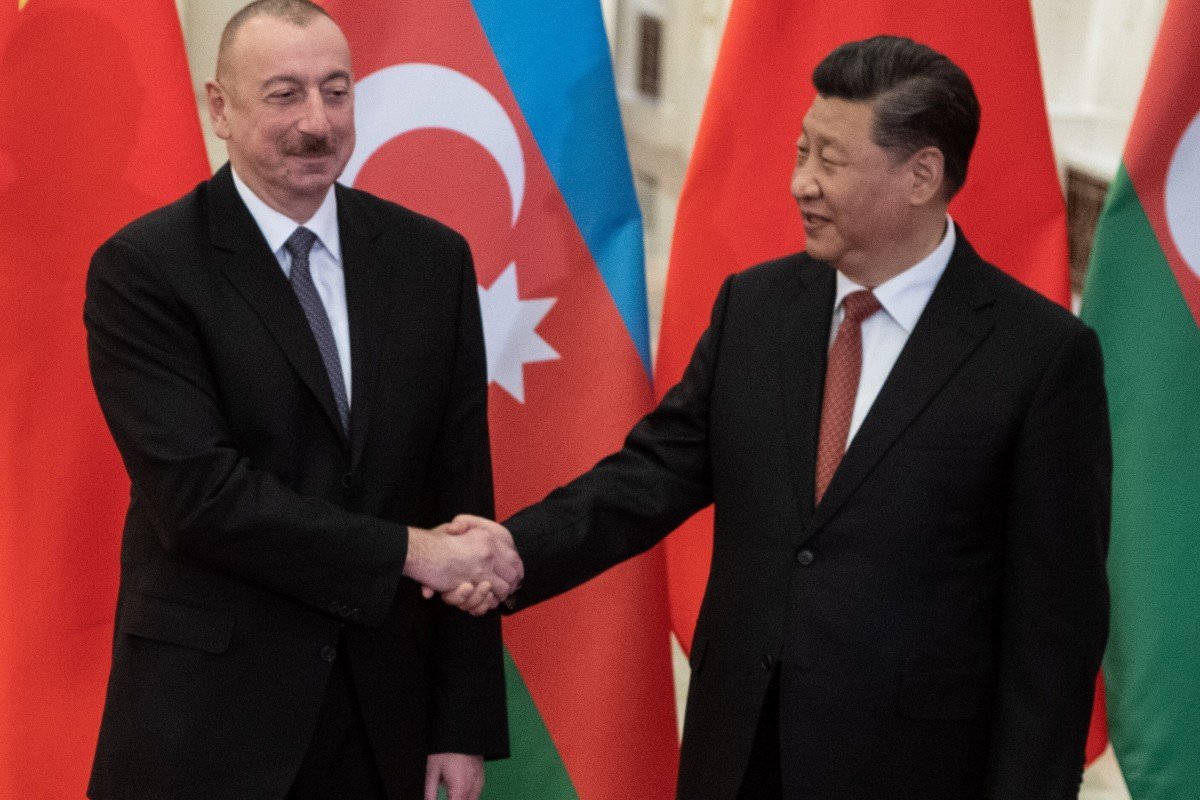 China has used Azerbaijan’s ongoing bilateral negotiations on its World Trade Organisation (WTO) membership to open up access for belt and road projects.

China is actively pursuing investment in Azerbaijan through the Belt and Road Initiative to take advantage of its strategic position in central Asia, experts said, even as Baku maintains rigid limits on foreign capital inflows, thwarting Chinese efforts to invest in the service sector.

Beijing has used the ongoing bilateral negotiations on Azerbaijan’s prolonged World Trade Organisation (WTO) membership process to open up access for projects under its belt and road plan to grow global trade.

Rather than seeking a purely export-import trade deal, China has been seeking market access commitments from other belt and road countries seeking to join the WTO since announcing its plan to grow global trade in 2013, according to international trade lawyer Julien Chaisse.

The Azerbaijani government is seen to be slow walking its efforts to join the WTO so that it can maintain barriers that safeguard the state-supported monopolies that control the country’s underdeveloped service sector, particularly financial and business services, as well as telecommunications.

Chaisse, who has handled some negotiations for Azerbaijan, said China’s demands for market access were one of the stumbling blocks for Azerbaijan, even though the requests did not go against WTO rules.

Talks with China are not believed to have stopped entirely, although there are obstacles around “how much” market access is suitable.

“The basic idea is that China is using the WTO accession process to leverage interest towards the Belt and Road Initiative to obtain greater commitments from existing and potential [belt and road] nations. China is not offering any [trade deal] as part of WTO accession but … on the contrary China is requesting market access commitments from candidate countries such as Azerbaijan,” Chaisse said.

“China’s trade commitments from potential accession countries are becoming more pronounced since the [Belt and Road Initiative]
launch in 2013, with increasing and sometimes onerous expectations of the acceding countries.”

The main belt and road project involving Azerbaijan is the Trans-Caspian International Transport Route, a land transport network stretching from China and Southeast Asia to Europe, part of China’s effort to replicate the ancient Silk Road route between China, the Middle East, Africa and Europe.

China’s focus on Azerbaijan started with its oil and gas resources before the launch of the belt and road strategy, Anar Valiyev, a Baku-based public affairs researcher, said, although it was the Belt and Road Initiative that really kicked off its interest some five years ago.

Azerbaijan State University of Economics lecturer Bahruz Babayev said Azerbaijan, located at the crossroads of the East and West, offers China “an advantageous location and logistic opportunities to accommodate Chinese exports coming through Central Asia and the Caspian Sea”.

“And the [Belt and Road Initiative] overlaps with the strategic interests of Azerbaijan, therefore it is perceived as a welcome initiative,” he said.

It is seen locally as a mutual win for both countries, with the plan enabling Azerbaijan to boost its domestic market particularly as a “transit hub”, Babayev added.

Aside from the exports of oil and gas, Azerbaijan wants to offer transport services such as port and rail facilities for shipments moving between western China and Europe on the Trans-Caspian International Transport Route.

Transport time from China to Europe along the so-called middle corridor, one of the six official routes of the New Silk Road, is significantly quicker than transport by sea, as well as offering an alternative to the route through Russia.

Current government policy in Azerbaijan is therefore both a blessing and a curse for China in that it provides support for the belt and road strategy, but also shuts out China’s market access efforts that would be boosted by WTO membership.

And even if Azerbaijan is willing to offer more access, its structure of the domestic economy would complicate Chinese investment.

“It is not the case that Azerbaijan does not want to give China [market] access. Simply, the Azerbaijani market is highly monopolistic,” said Valiyev added. “Thus, it creates unfavourable conditions for everyone.”

For now, as it focuses on its own economy, Azerbaijan appears to be in no hurry to join the WTO, having started the process in 1997.

“I think the time has not yet come. This is due to the fact that the bulk of our exports is still oil and gas and you do not need to be a member of the WTO to export these products,” Azerbaijan President Ilham Aliyev said in December.

“Instead, our main task is to develop the non-oil sector, increase local production, and protect our domestic market. If we become a member of the WTO, our producers may face major problems. It is possible that large quantities of low-quality imported products will come to Azerbaijan and take market share, causing harm to local producers.”

The coronavirus outbreak has also put another spanner in the works on the WTO membership, as Azerbaijan is now focusing on deepening its oil and gas sales to Europe, Babayev from the Azerbaijan State University of Economics said.

“We are selling [more] oil and gas to Europe in the next three months … we would be interested in the WTO, but it probably won’t happen in the next five years,” Babayev said.

There are currently around 119 companies in Azerbaijan relying on Chinese capital, with one of the most recent, a US$300 million injection into a tyre factory in Azerbaijan by the China National Electric Engineering Company, which was signed during the second Belt and Road Forum for International Cooperation in April 2019.

“Both the Azerbaijani public and political establishment contend that China does not have a political agenda in the region due to its geographical distance. Chinese projects are therefore considered in purely economic terms,” Valiyev added.

Baku-based carpet maker and distributor Murad Muradov said his main interest was in securing more capital to expand his business.

“Of course if the [WTO membership] brings additional foreign investment to Azerbaijan, the membership would [also] be good,” he said.