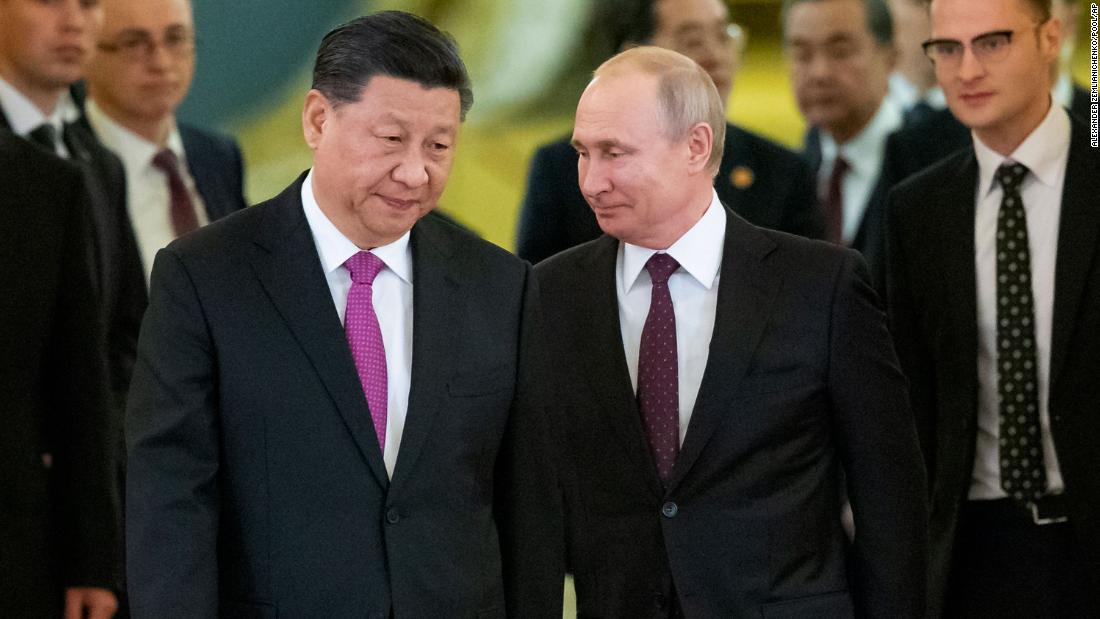 Chinese leader Xi Jinping reiterated his support for Moscow on "sovereignty and security" matters in a call with counterpart Vladimir Putin on Wednesday, upholding his backing for the countries' partnership despite the global backlash against Russia's invasion of Ukraine.

Speaking on his 69th birthday, Xi also pledged to deepen strategic coordination between the two countries, according to China's Foreign Ministry.

A separate readout from the Kremlin said the two leaders stressed their countries' relations were "at an all-time high" and reaffirmed their commitment to "consistently deepen the comprehensive partnership."

The call is thought to be the second time the two have spoken since Russia invaded Ukraine. They last spoke just days after Moscow launched what it insists on calling a "special military operation."

China, too, has refrained from referring to Russia's actions as an invasion and has walked a fine line on the issue. It has portrayed itself as calling for peace and upholding the global order, while refusing to denounce Russia's actions. It has also used its state media apparatus to mimic Kremlin lines blaming the United States and NATO for the crisis.

During Wednesday's call, Xi stressed China had always "independently assessed the situation" in Ukraine and called for "all parties" to push for a "proper settlement of the Ukraine crisis" -- echoing language he used in a March call with US President Joe Biden.

China is "willing to continue to play its role" in promoting a "proper solution" to Ukraine, he said.

The Kremlin's summary of the call took this position a step further, saying: "the President of China noted the legitimacy of Russia's actions to protect fundamental national interests in the face of challenges to its security created by external forces."

China's lack of censure for Russia's war in Ukraine has further strained Beijing's tense relationship with the US and its allies.

US officials have repeatedly called on countries to condemn Russia's actions and warned their Chinese counterparts against aiding Moscow. During the March call between Xi and Biden, the US President spelled out consequences if China gave material support, following US intelligence that Moscow asked Beijing for military assistance -- a claim both deny.

Wednesday's call was also a chance for Putin and Xi to check in on a growing trade relationship.

Earlier this year, weeks before the Russian invasion, the two leaders in a face-to-face meeting said their countries had a "no limits" partnership and pledged to boost trade.

"Since the beginning of this year, bilateral relations have maintained a sound development momentum in the face of global turbulence and transformations," Xi said in the Wednesday call.

"The Chinese side stands ready to work with the Russian side to push for steady and long-term development of practical bilateral cooperation," Xi said, pointing to the "steady progress" of their trade ties and the opening last week of the first cross-border highway bridge over the Amur River.

The two agreed to expand cooperation in energy, finance, manufacturing and other areas, "taking into account the global economic situation that has become more complicated due to the illegitimate sanctions policy pursued by the West," the Kremlin readout said.

The two countries also pledged to work together to strengthen communication and coordination in international bodies such as the United Nations -- where the two often vote as a bloc.

"China is also willing to work with Russia to promote solidarity and cooperation among emerging market countries ... and push for the development of the international order and global governance towards a more just and reasonable direction," Xi said, in a comment that hit on the countries' shared aim of pushing back against what they view as the global hegemony of the United States.

The call was not the first time that Xi and Putin -- two strongmen drawn together by mutual distrust of the West -- have had engagements on each others' birthdays.

In 2013, Xi presented Putin with a birthday cake and the two drank vodka together to mark the Russian leader's 61st birthday during a conference in Indonesia. Xi later celebrated his 66th birthday during a 2019 summit in Tajikistan with Putin, who surprised him with ice cream, cake and champagne.

Their personal relationship, in which Xi has described Putin as his "best and bosom friend" is also thought to bolster the dynamics of their strengthening rapport on the national level.

In its summary of the two leaders' latest call, the Kremlin noted the conversation was held in a "traditionally warm and friendly atmosphere."