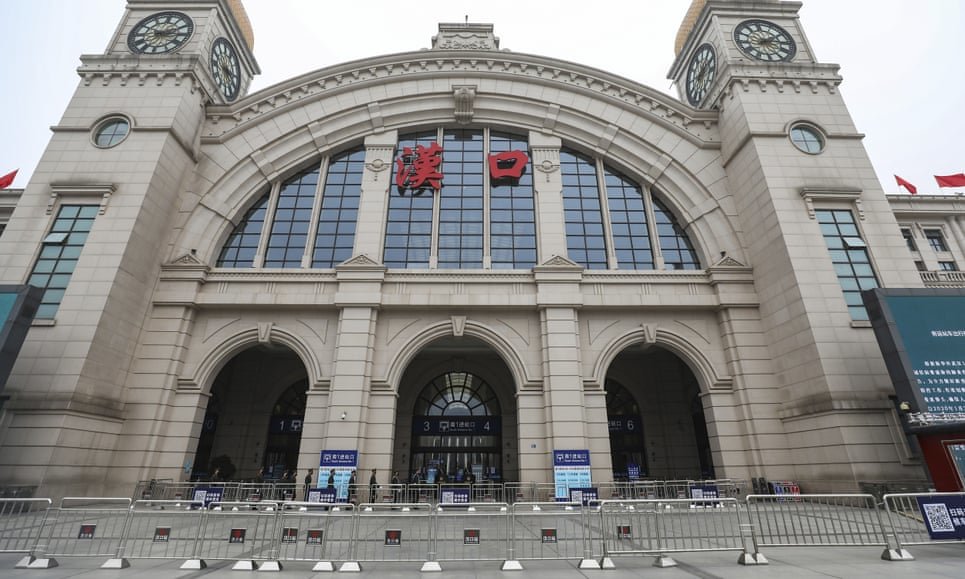 Residents in affected cities hoard supplies and isolate themselves at home
Chinese authorities have imposed lockdown measures on ten cities in an unprecedented effort to contain the outbreak of the deadly new virus that has made hundreds of people ill and spread to other parts of the world during the busy lunar new year travel period.

Authorities banned transport links from Wuhan, the capital of Hubei province, on Thursday morning, suspending buses, subways, ferries, and shutting the airport and train stations to outgoing passengers. Later in the day, the nearby central Chinese cities of Huanggang and Ezhou announced similar measures. Travel restrictions were also placed on the smaller cities of Chibi and Zhijiang.

Starting at midnight, long-distance buses, the rapid transit system, and the train station in Huanggang would be shut, according to a notice from the local government. Cinemas, internet cafes and other entertainment venues would all stop operating. Residents should not leave the city, except for “special reasons”.

A government notice in Ezhou said the city’s railway would stop operating on Thursday evening. In nearby Chibi, authorities said buses and rural transport links would be halted. Officials also ordered tour operators to cancel operations and said no more large-scale cultural events were to be held.

There have been 830 confirmed cases in China of the coronavirus, from the same family of viruses that gave rise to Sars. Chinese authorities say 95 patients remain in a critical condition.

On Thursday, Hebei’s provincial health authority said an infected patient had died, marking the first confirmed death outside Hubei province, where the outbreak began. On Friday morning the official death toll rose to 25.

Cases have also been confirmed in the US, the UK, Taiwan, South Korea, Thailand, Japan, Hong Kong, Vietnam and Singapore.

Officials worry the weeklong lunar new year holiday, which begins on Saturday and usually sees hundreds of millions of Chinese crisscross the country, will exacerbate an outbreak that has reached almost all of China’s provinces.

The state-run Beijing News said the capital had cancelled events including two well-known lunar new year temple fairs. The Forbidden City, the palace complex in Beijing that is now a museum, announced it will close indefinitely on Saturday.

While sweeping measures are typical of China’s communist government, large-scale quarantines are rare around the world, even in deadly epidemics, because of concerns about infringing on people’s liberties, and the effectiveness of such measures is unclear.

“To my knowledge, trying to contain a city of 11 million people is new to science,” Gauden Galea, the World Health Organization’s representative in China, told the Associated Press. “It has not been tried before as a public health measure. We cannot at this stage say it will or it will not work.”

Late on Thursday Wuhan city authorities said that limits on car travel would be introduced for the first time at noon on Friday.

In Wuhan, supermarket shelves were empty and local markets sold out of produce as residents hoarded supplies and isolated themselves at home. Petrol stations were overwhelmed as drivers stocked up on fuel, exacerbated by rumours that reserves had run out. Local residents said pharmacies had sold out of face masks.

“When I saw the news when I woke up, I felt like I was going to go crazy. This is a little too late now. The government’s measures are not enough,” said Xiao, 26, a primary schoolteacher in Wuhan, who asked not to give her full name.

Anxiety in Wuhan has been exacerbated by reports that hospitals are turning patients away because they do not have enough room. A hospital contacted by the Guardian on Thursday said it had between 500 and 600 patients and recommended patients go to a community health centre instead. Eight hospitals in Wuhan put out calls for donations of protective equipment, according to Chinese media.

Officials said they would build a new hospital in six days to accommodate patients, modelled after an isolation facility constructed in Beijing during the Sars outbreak.

Hubei officials said schools, on break for the spring festival holiday, would delay the beginning of the spring term.

The illnesses from the newly identified coronavirus appeared last month in Wuhan, an industrial and transportation hub in central China. The vast majority of cases in the mainland have been in the city.

The coronavirus family includes the common cold as well as viruses that cause more serious illnesses, such as the Sars outbreak that spread from China to more than a dozen countries in 2002-03 and killed about 800 people, and Middle Eastern respiratory syndrome which developed from camels.

China is keen to avoid repeating mistakes with its handling of Sars. For months, even after the illness had spread around the world, China parked patients in hotels and drove them around in ambulances to conceal the true number of cases and avoid WHO experts.

In the current outbreak, China has been credited with sharing information rapidly, and President Xi Jinping has emphasised that as a priority.

On Thursday a WHO committee said the outbreak does not yet constitute a public health emergency of international concern. Previous emergencies have included Ebola and Zika.
Add Comment