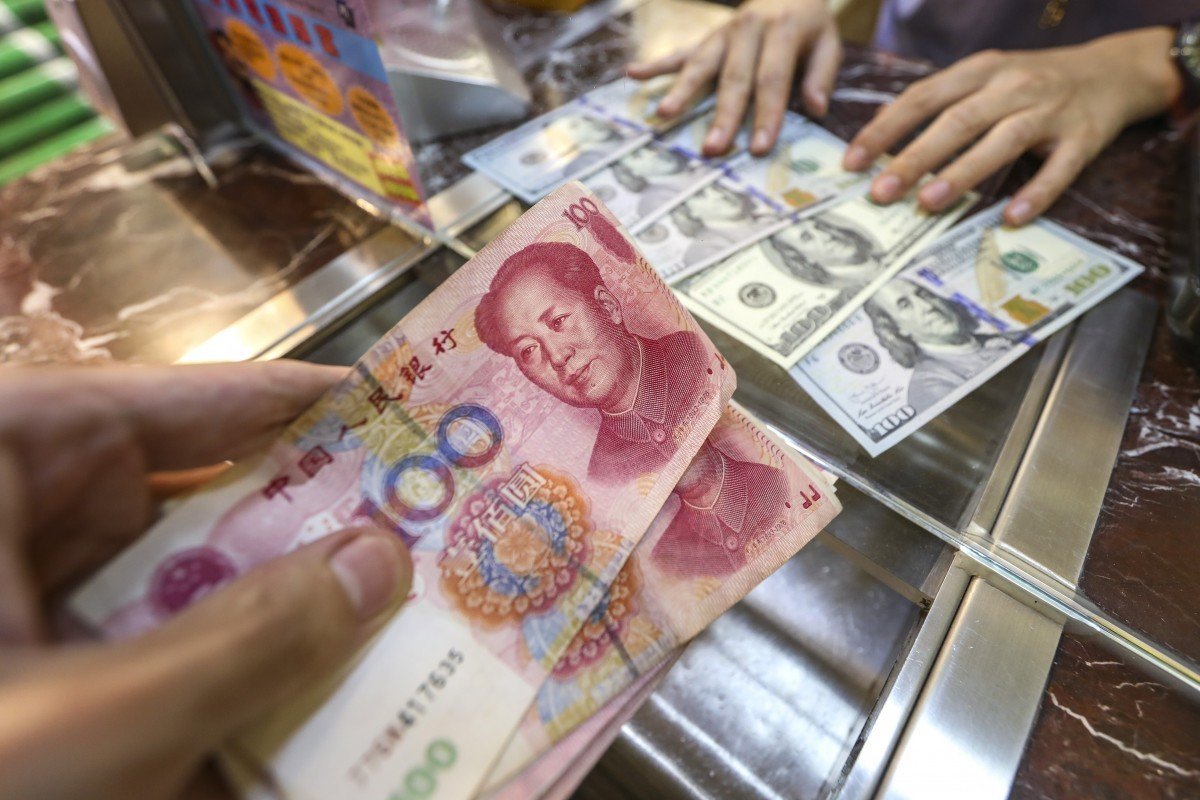 China’s preference for a relatively weak exchange rate to help exporters and stimulate economic growth might soon be coming to an end, according to a growing number of analysts.

The yuan exchange rate has experienced significant depreciation in the past five years, with the central bank allowing its value to fall around 10 per cent against the US dollar since major currency reforms were introduced in August 2015 and as the economy gradually slowed.

But Chinese leaders are seemingly shifting towards a stronger exchange rate policy to develop the domestic consumption market in the coming years, while the export sector will likely play a secondary role amid escalating US-China tensions, analysts said.

Trading at around 6.83, the yuan stands at its strongest level against the US dollar in a year. A lower yuan exchange rate figure means it takes fewer yuan to purchase one US dollar, indicating a stronger Chinese currency.

"The five-year devaluation process of the yuan has ended. In the future, the yuan will enter a longer process of appreciation Gao Shanwen"

“I think the five-year devaluation process of the yuan has ended,” said Gao Shanwen, chief economist at Essence Securities. “In the future, the yuan will enter a longer process of appreciation. Maybe it will start soon.”

In a departure from its previous policy bias in favour of a weaker exchange rate, the PBOC is now signalling that it will tolerate further gains in the yuan by refraining from using its tool kit of measures to curb the currency’s rally, analysts explained.

Traditionally, the PBOC uses the central parity of the yuan’s daily parity rate, administrative measures or direct intervention to curb excessive appreciation or depreciation pressure of the partially convertible currency as part of its overarching goal to control economic growth and inflation.

The yuan’s parity rate is used as the midpoint of the yuan trading range against the US dollar, allowing the currency to fluctuate by 2 per cent on either side of the so-called fixing each day.

In 2017, to offset strong appreciation pressure, the PBOC introduced a “countercyclical factor” – the details of which have never been disclosed – designed to lessen the effect of market forces on the price setting of the yuan’s daily parity rate.

The PBOC also eased currency controls to make it cheaper for financial institutions to bet against the yuan, prompting the currency to reverse its appreciation and decline.

“[But this time around,] the PBOC has yet to lean strongly against yuan appreciation,” said Goldman Sachs analyst Maggie Wei. “We expect these drivers to remain in place and the strengthening trend of yuan against the US dollar to continue in the next 12 months.”

Wei expects broad weakness amid a low US dollar interest rate environment to continue to drive the yuan stronger.

"Against these external and domestic drivers supporting the yuan, we believe Chinese policymakers would need to tolerate further yuan appreciation Paul Mackel Paul"

Mackel, HSBC’s head of emerging markets foreign exchange research, said that rather than tariffs, there have been more actions and threats from the United States to impose financial sanctions on Chinese individuals and firms. This concerning development would accelerate the yuan’s internationalisation in the coming years, which could arguably lead to a stronger yuan.

“Against these external and domestic drivers supporting the yuan, we believe Chinese policymakers would need to tolerate further yuan appreciation,” Mackel added. “There will likely be occasional two-way fluctuations caused by potential geopolitical headlines, but we doubt that will change the overall [appreciation] trend.”

One key reason that Chinese policymakers are relaxed about the yuan’s strength is because the currency remains relatively undervalued on a trade-weighted basis, as reflected in China’s recent strong export performance, analysts said.

Despite the notable appreciation against the US dollar this year, the yuan’s increase has been more modest against the euro. The yuan is still trading below its March peak in the PBOC’s trade-weighted currency basket against the currencies of major trading partners.

“[Previously,] China’s share of global exports kept decreasing, showing that its trade product competitiveness continued to fall because the yuan was significantly overvalued,” Gao said from Essence Securities. “However since 2019, China‘s export share has begun to rise again despite US-China trade frictions. Undervaluation of the yuan has given China additional competitiveness.”

China’s exports unexpectedly grew 9.5 per cent in August from a year earlier, up from a gain of 7.2 per cent in July, and the third consecutive monthly increase.

Under the so-called dual circulation plan, Chinese leaders will ramp up their efforts to develop the domestic consumption market given the huge population and growing incoming levels, Cheung said.

“The China [domestic] consumption market will be the key to retain foreign investment, against the backdrop of manufacturing relocation amid the mounting risks of US tariffs and sanctions and rising production costs in China,” Cheung said.

Qin Tai, analyst at investment firm Shengyin Wanguo, said China’s desire to accelerate capital flows into the country to support the yuan was increasingly apparent as it has started to restrain its monetary stimulus to ensure relatively high bond yields to attract purchases by foreign investors as part of its plan to further open up its capital markets.

"The Chinese government may allow the yuan to accelerate its appreciation against the US dollar to lower import prices and stimulate consumer spending, and thereby coordinating with policy guidelines for domestic economic circulation Carie Li Ruofan"

The broadening of US-China tensions beyond goods trade is also prompting China to shift towards a stronger yuan bias to stimulate import demand and insulate itself by promoting stronger consumer spending at home.

“The Chinese government may allow the yuan to accelerate its appreciation against the US dollar to lower import prices and stimulate consumer spending, and thereby coordinating with policy guidelines for domestic economic circulation,” said Carie Li Ruofan, economist at OCBC Wing Hang Bank.

China is also pushing greater use of the yuan in international payments in response to actions and threats by the US to impose financial sanctions on Chinese individuals and firms and possibly cutting them off from the US dollar payments system, HSBC’s Mackel added.

“The risk of financial sanctions – could arguably lead to a stronger yuan over the medium-term via accelerated yuan internationalisation,” Mackel said. “A stronger yuan would help China diversify away from the US dollar and optimise its resource allocation.”