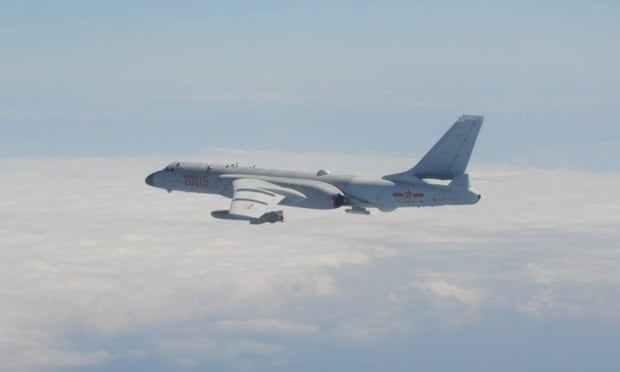 In recent years the People’s Liberation Army has ratcheted up its missions, which it says are training drills, to near-daily frequency
China’s air force flew 39 warplanes into Taiwan’s air defence identification zone on Sunday, the largest daily number since record-breaking incursions in October.

Taiwan’s Ministry of Defence said it had tasked aircraft in response, issued radio warnings to the People’s Liberation Army (PLA) pilots and deployed missile defence systems to monitor the activity.

In recent years the PLA has ratcheted up its incursions, which it says are training drills, to near daily frequency. Over four days in October nearly 150 planes were dispatched, breaking previous records and coinciding with China’s National Day, a key patriotic holiday.

Sunday’s sorties into the Taiwan Strait included 34 fighter jets, one bomber, two electronic warfare planes and two intelligence-gathering planes. They flew near the disputed Pratas Islands and close to the edge of the median line, an unofficial border of set length through the Strait between Taiwan’s main island and China. Longstanding tacit agreement over the marker appeared to be thrown out by China in 2020, when a foreign ministry spokesperson said there was no such thing. No Chinese missions crossed the line between its declaration by US military figures in 1955 and 1999, and remained rare in the years after. In September 2020 Taiwan accused China of flying dozens of planes across the line after a visit by senior US official Keith Krach.

On Sunday the Financial Times reported China had established a permanent presence of at least one warship in the waters between Japan’s southern islands and Taiwan for the last six months, the first time it has done so on the eastern side of the islands between it and the Pacific.

Beijing considers Taiwan to be a province of China, and has not ruled out taking it by force. The PLA flights into the Strait are grey-zone tactics – war-adjacent strategies which do not meet the threshold of combat – which are thought to be designed to intimidate Taiwan and wear out its military by forcing constant responses.

Taiwan, which is a self-governing democracy with open elections and free press, maintains it is a sovereign nation. In response to Beijing’s threats it is strengthening its military with assistance and weapons purchases from the US, but faces challenges. Earlier this month it suspended combat training for its F-16 fleet after a recently upgraded model of the plane crashed into the sea, presumably killing the pilot, whose body has not been found.

The Chinese planes did not fly into Taiwan’s sovereign airspace on Sunday, which would represent a significant hostile act. The ADIZ is a self-declared airspace which Taiwan’s government monitors for defence purposes.

China’s military did not give a reason for the missions on Sunday, but it came days after a US warship conducted a freedom of navigation exercise near the disputed Paracel Islands.

US and Japanese naval forces were also conducting exercises in the Philippines Sea over the weekend, which the US Pacific Fleet said included two carrier strike groups “conducting training to preserve and protect a free and open Indo Pacific”.
Add Comment