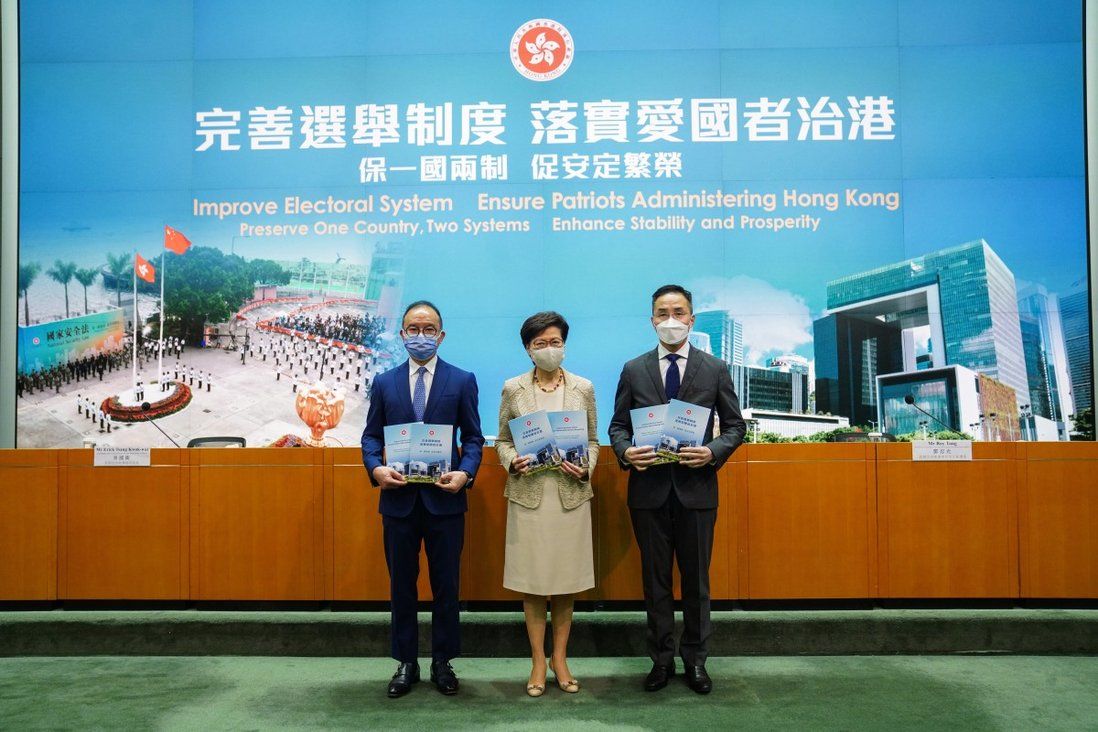 While some of the far-reaching changes were expected in the final resolution passed unanimously by the National People’s Congress Standing Committee on Tuesday, there were some surprises such as the revelation that a chief convenor holding an “office of state leadership” would head the body newly empowered to have oversight of key elections in the city.

Explaining the shake-up, Chief Executive Carrie Lam Cheng Yuet-ngor made it clear that the chief convenor – expected to be either Tung Chee-hwa or Leung Chun-ying, two of her predecessors who now serve as vice-chairmen of the Chinese People’s Political Consultative Conference – would not be involved in governance, dismissing speculation that her own authority could be undermined.

“I want to assure you that this is a clause for use under very, very exceptional and rare situations, and this convenor system will only kick in during elections,” Lam said.

“During normal periods of governance, this convenor system, or the chief convenor, has absolutely no role in the governance of Hong Kong. It certainly will not have any influence over the chief executive or the principal officials.”

Individual voters will have less of a say in polls for both the Legislative Council and Election Committee, while all aspirants eyeing seats in the two bodies will be put through a stringent vetting process led by Lam and assisted by the police national security unit.

“The police have been given this responsibility under the national security law, it is only right that they will discharge this duty,” Lam replied when questioned about the role of the force.

A new “Candidate Eligibility Review Committee” – comprising only principal officials – will be established to vet would-be candidates based on background checks and information provided by the national security unit, and its decisions cannot be challenged through any judicial review or appeal process.

Lam and her supporters welcomed the shake-up as a necessity to place Hong Kong back on the right track after the anti-government protests and political upheaval of 2019, even paving the way for universal suffrage. But while the overhaul was underpinned by Beijing’s bottom line that only “patriots” would be allowed to run Hong Kong from now on, opposition activists, human rights lawyers and other critics slammed it as a total retrogression that would crush dissenting voices in the electoral system.

The Election Committee, formerly responsible only for choosing the city’s leader, will be granted the new power to nominate lawmakers and send 40 representatives of its own to Legco, which has been expanded from 70 to 90 seats.

Among some eyebrow-raising changes is the addition of mainland Chinese-affiliated organisations to the now 1,500-strong Election Committee, expanded by 300 seats and featuring a fifth sector of representation.

The newcomers include representatives of mainland-based Hongkongers, grass-root associations and “associations of Chinese townsmen”.

While 117 district council seats in the Election Committee – currently dominated by the opposition – will be scrapped as expected, they will be replaced by 156 members of municipal-level bodies often dominated by the pro-establishment camp, such as district fire safety and crime fighting committees.

More than 80 per cent of Election Committee seats will be returned either through appointments or corporate voting, a significant change from the previous model in which most of the professional subsectors were elected through individual votes.

With the Election Committee constituencies – originally abolished in 2004 – making a comeback in Legco, the number of geographical seats will be slashed from 35 to just 20, marking the lowest proportion of directly elected seats since the city’s handover to Chinese rule in 1997.

“Superheats” for five district council (second) constituency lawmakers – created in a 2010 political reform compromise and elected by about 4 million voters without a vote in any other functional constituency – will now be scrapped.

Instead, two new seats will be created to represent mainland enterprises and local delegates to national bodies and organisations respectively.

Only a third of the 30 trade-based functional constituency seats, traditionally dominated by pro-establishment forces, will be filled through direct voting, and the rest elected by corporate voters.

In a surprise move that even pro-establishment politicians had previously warned would be too stringent, all Legco aspirants must now secure two to four nominations from each of the Election Committee’s five sectors, which encompass various businesses, professions, social organisations, the new patriotic groups, lawmakers and local representatives in the national legislature.

The new requirement significantly raises the entry barriers for opposition hopefuls, as they will find it extremely difficult to secure support from all five sectors.

The sweeping electoral changes through Beijing’s revisions to annexes 1 and 2 of the Basic Law, Hong Kong’s mini-constitution, come more than nine months after the imposition of the national security law in Hong Kong.

Throwing her “resolute” support behind Beijing’s decision, Lam insisted that the focus on only patriots running the city did not mean opposition pan-democrats would be automatically shut out.

“One should not take it for granted that all pan-democrats are unpatriotic. That would be very unfair to them,” she said.

Britain was quick to condemn Beijing, with Foreign Secretary Dominic Raab saying: “Today China enacted changes to Hong Kong’s electoral system which are a clear breach of the Joint Declaration – undermining the freedoms of the people of Hong Kong and breaking Beijing’s international obligations.”

Democratic Party chairman Lo Kin-hei said the city’s political system had regressed to 1997 standards, and Hong Kong was now even further away from achieving the ultimate goal of universal suffrage as enshrined in the Basic Law.

“I think for many Hong Kong people, they have lost hope in the [political system],” Lo said, adding that his party and others were further put off from running in elections.

“Further concerns are the increased resort to insulating decisions from judicial review which is one of the last checks on government decision-making and the vague concept of patriotism,” he said. “Combined, these measures result in a further erosion of the rule of law.”

But in an interview with state media, Zhang Yong, vice-chairman of the Basic Law Committee under the National People’s Congress Standing Committee, said it would be easier for the city to implement universal suffrage following the electoral shake-up.

Lam said she aimed to introduce local legislation to implement the changes by mid-April and hoped it would be passed by the end of May. The Legco elections, originally postponed from last year to this September, would further be pushed back to December in order to make way for the Election Committee polls, she added.

“How should one judge democracy? What is the best system of democracy?” she said when questioned about Hong Kong’s democratic development being pushed back.

“I am one of those who will not subscribe to a view that there is only one single model of democracy in this world. There’s no one size that fits all.”