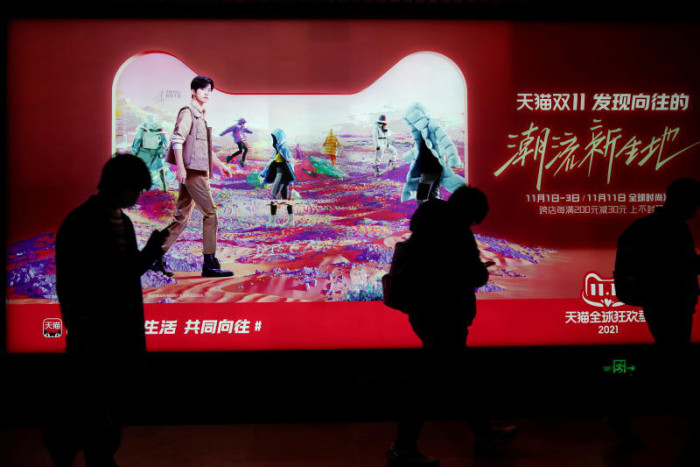 The popularity of Chinese-made goods is part of a trend known as "Guochao", which reflects growing interest among consumers in local brands, design and culture.

After the successful debut of Chinese sportswear brand Li-Ning at New York Fashion Week in 2018, "Guochao" has taken off and come to embody a new wave of national pride and identity.

Internet searches for domestic goods rose by 42% during this year's Singles' Day, the steepest rise in the past three years, according to data from search engine Baidu.

"Until recently and in many industries, Chinese brands were seen as less trustworthy and of lesser value than foreign brands by Chinese consumers," said Camille Gaujacq, analyst at market research firm Daxue Consulting.

"With the country's development and rising nationalist sentiment, we observe both a rise in interest in cultural products, but also in domestic companies."

Daxue Consulting say Chinese youth are the main driving force behind the trend, citing a survey conducted last year by TrendInsights that showed 80% of Gen-Z consumers had heard of "Guochao".

Fang Hui Chun Tang, a Chinese medicine shop established during the Qing dynasty that ruled from 1644-1911, sold out of most of its herbal tea and traditional supplements by late afternoon on Nov 11.

The Chinese Consumers Association tallied a near three-fold increase in sales among traditional medicine shops this year.

The top selling product for Fang Hui Chun Tang was the black sesame pill, a marble-sized black glutinous ball wrapped in gold tinfoil boasting health benefits from better hair growth to warding off fatigue. It was sold in a set of three jars for less than 150 yuan (770 baht).

The buyer's comment section on Fang Hui Chun Tang's Taobao shop showed pictures of bulk purchases, with shoppers across China buying up to 10 jars at once and praising its bargain price and superb flavour. Taobao is owned by Alibaba, which owns the South China Morning Post.

Other trending products included a herbal tea coined "all-nighter tea" and a traditional pear paste, which are both still out of stock.

Henan Museum reported sales of more than 180,000 yuan for its archaeological blind box toy, each of which contains random replicas of museum relics that buyers can dig up with miniature spades.

The "Guochao" trend has also coincided with party doctrine introduced by President Xi Jinping in 2016 called "cultural confidence", which calls for citizens to affirm and be proud of their history, values and culture for national advancement.

Nationalistic sentiment has been on the rise among Chinese citizens in recent years and has resulted in boycotts of international brands over their stance on the alleged use of forced labour in Xinjiang.

"Considering where China is right now geopolitically, the Chinese are feeling more pride to be at home with their culture, and it's something that has transformed into the rise of domestic brands - in fashion, cosmetics, and technology, where Chinese brands are becoming bigger players and domestic consumers are ready to pick them up," said Mike Vikenborg, senior consultant at Daxue Consulting.

New Chinese brands are also growing in prominence. Chinese dairy brand Adopt a Cow, electric vehicle manufacturer Yadea, and sportswear company Erke have had the highest spike in year on year search engine growth on Baidu over the past 30 days.

Erke's sales shot up 1,515% year on year in August, following nationwide attention to the brand's 5 million yuan donation to Henan province during the July floods, despite rumours it had been operating at a loss.

Technology products have also benefited from the "Guochao" trend. Smartphone producer Xiaomi announced its sales exceeded 150 billion yuan by 10am on the main sales day, with its high-end flagship products recording a three-fold sales increase from the same time last year.

"When it comes to technology, consumers are not really considering what is happening at an international level," he said.

"There's not a lot to differentiate between technological products besides quality.

"However, when it comes to fashion or things they can express themselves with, there will be values at stake. Beyond that, it's still market-driven and consumers are rational."

The penchant for home-grown goods remains after the Singles' Day sale frenzy, and analysts agree that "Guochao" is far from a temporary craze.

"The rise in consumption of this kind of product is definitely here to stay," Gaujacq said, comparing Guochao to the rise of traditional clothing - "Hanfu" - in the past few years, which has proven to be a thriving subculture among Chinese youth.
#Alibaba
Add Comment